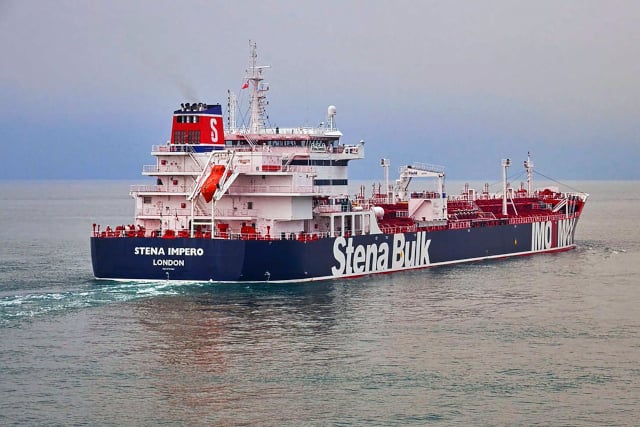 “Seven crew members will be released according to the Iranian authorities… but we don't know when,” Erik Hanell, CEO of Stena Bulk which owns the tanker, told AFP, adding that the company was “cautiously” awaiting official confirmation of their release date.

The British-flagged tanker has a total crew of 23 on board.

“We view this communication as a positive step on the way to the release of all the remaining crew, which has always been our primary concern and focus,” Stena Bulk said in a statement sent to AFP.

Iran's Islamic Revolutionary Guard Corps seized control of the Stena Impero on July 19th as it was navigating through an international passage in the middle of the Strait of Hormuz, a narrow chokepoint at the entrance of the Gulf.

The ship has since been held offshore near Iran's southern port of Bandar Abbas.

Iranian officials have given varying reasons for its seizure and continued detention.

Some, such as Foreign Minister Mohammad Javad Zarif, said it was for breaching maritime regulations.

It has also been claimed that its transponder was turned off, it was going the wrong way along a shipping channel or had collided with an unidentified fishing vessel.

But Iranian authorities have denied the seizure of the Stena Impero was a tit-for-tat move after British commandos seized an Iranian oil tanker on July 4th as it passed through Gibraltar's waters, under suspicion it was breaking EU sanctions on oil deliveries to Syria.

That ship, the Adrian Darya 1 (formerly the Grace 1), was ordered released by Gibraltar on August 15th and was last registered off the coast of Lebanon and Syria on Monday.