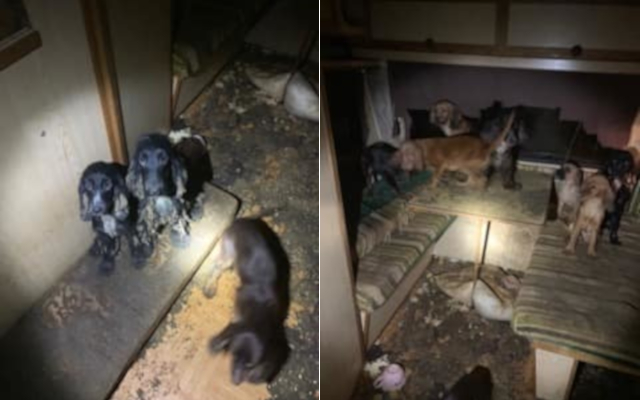 The dogs were found in a police raid in northern Sweden. Photo: Polisen

Police and county administrative officers found more than 60 dogs crammed in two caravans during an animal rights inspection on Tuesday.

The owners, from Ånge in the Medelpad region, are suspected of having fled with the dogs to avoid the inspection, but after searching for hours police managed to track them down.

“It was neglect and misery. Some puppies were only a few days old and were nursing. Some of the dogs were in a really bad shape,” police officer Daniel Dübbel told Sundsvalls Tidning.

They then found another 10 dogs at a nearby farm on Wednesday.

At least two of the dogs had to be put down and the rest were taken into care.

The owners are suspected of violating Sweden's animal protection act.

There are several different breeds among the dogs and around half of them are fully grown and half are puppies, according to the county administrative board. They are currently being examined by veterinarians to assess how many of them are in a good enough condition to be rehomed.

The case has sparked shock, anger and pity in equal measure, with hundreds of comments left on the police's Facebook page. Authorities said a lot of people had volunteered to help take care of the dogs.

“Inquiries are pouring in via Facebook and telephone,” said Sara Sundin of the county administrative board in Gävleborg in a statement on Thursday. “As soon as we know how many dogs can be rehomed we will get back to the people who have got in touch with us.”

Dübbel, one of the officers who found the dogs, told Swedish public broadcaster SVT that he himself had offered to adopt one of the dogs.