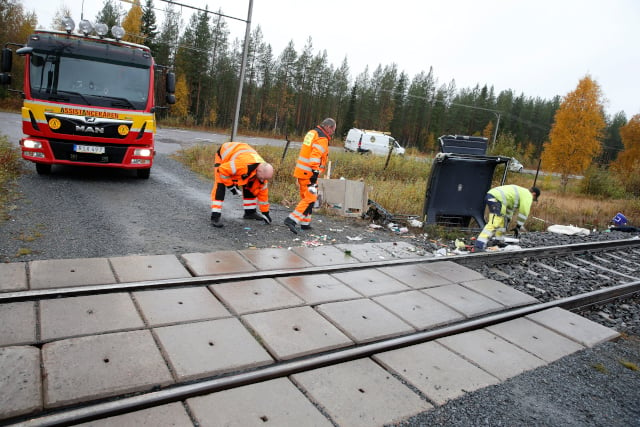 Two people died in a crash between a car and a train north of Boden. Photo: Pär Bäckström/TT

The latest accident happened at around 11am on Sunday between Boden and Murjek. Nobody on the train, carrying around 40 people on its way to Kiruna, was injured but both people in the car died.

And it's set to be another dark year for Swedish railways. By the end of August, 13 people had died at level railway crossings, according to statistics cited by TV4. That does not include the two latest deaths.

Several of people living close to the crossing north of Boden told newswire TT that they had contacted the Swedish Transport Administration to warn them about potential accidents.

Many level railway crossings in rural parts of Sweden still do not have any gates or warning lights installed, despite work being done to upgrade them.

A spokesperson for the Transport Administration, Bengt Olsson, told TV4 that the authority was trying to live up to its responsibility.

“But it's also a shared responsibility. We can't create a system that is totally safe, the only way in that case would be to stop all traffic,” he said.

In total, there are between around 85 and 100 deaths every year linked to Swedish railways, including at crossings, but also people on the tracks and electricity accidents at high-voltage installations. Around 80 percent of all accidents are believed to be caused by suicide.