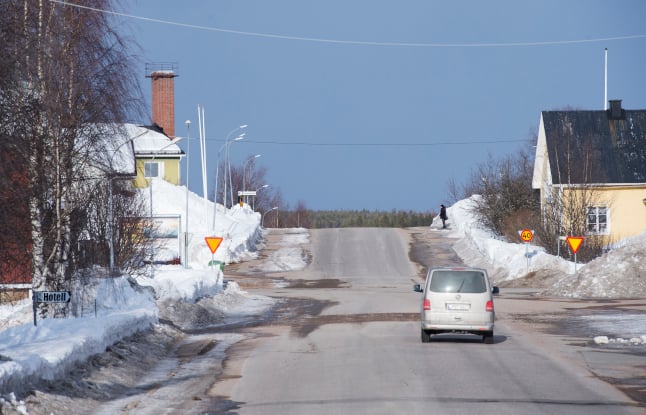 File photo of the town of Pajala in northern Sweden. Photo: Fredrik Sandberg/TT

The mercury dropped to the lowest temperature recorded this winter – a freezing -25.8C on Monday morning – in the town of Pajala in Norrbotten county, some 100 kilometres north of the Arctic Circle.

And it is set to get even colder. Monday's temperature is still well below what's usually in store for Pajala later in winter, and it's a far cry from -52.6C which is the coldest temperature ever officially recorded in Sweden, in Vuoggatjålme in the Lapland mountains on February 2nd 1966.

The forecast for the start of the week hinted at cold and crisp weather, with clear blue skies, in several parts of northern Sweden. The winter sunshine was expected to reach central Sweden.

“We'll get sunny weather in large parts of Norrland, but also in Svealand and some sun every now and then in northern parts of Götaland,” Alexandra Ohlsson, meteorologist at national weather agency SMHI, told the TT newswire.

Temperatures are expected to stay between 0 and -10C in northern Värmland and Dalarna on Monday and Tuesday, or even colder the further north you get.

The rest of Sweden can expect temperatures of around 0 and 5C, with slightly frosty mornings but not properly freezing yet.

But if you haven't yet changed to winter tyres, it is time to start thinking about doing so. Here are the rules you need to be aware of in Sweden.