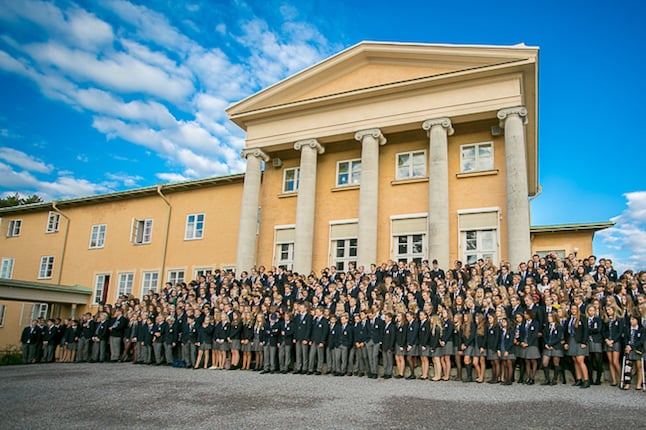 Better known as SSHL, this boarding school with a “fairytale” look and feel is located just north of Stockholm in a lush forest setting near the banks of Lake Mälaren. Despite its very Swedish setting, the school’s outlook and makeup is distinctly international. Nearly half of the school’s roughly 200 boarders are either foreign students or Swedish nationals who came to SSHL from abroad. There are also around 500 day students, mostly Swedes, but the overall diversity of its student body supports the school’s humanistic focus.

“As an international school, we have students from all over the world. They all come together and adapt to Swedish culture, in a way, but they also create their own culture and share their native cultures with one another,” teacher Melanie Cosgrave tells The Local.

Cosgrave says that she views the principle of respecting cultural difference as an important element of humanism, but far from the only one.

Your child can try boarding at SSHL for a weekend. Click here to find out more.

“Humanism, to me, is a life philosophy centered around recognizing the intrinsic value of individuals and groups, but it’s also about thinking critically about evidence and sources and about doing good in the world,” she said.

In addition to teaching English and French classes, Cosgrave is also the coordinator of SSHL’s Service as Action programme, which helps students take the notion of “doing good in the world”, which may sound to the cynic as an empty platitude, and turn it into real life action. “We want to encourage our students to look at the world and see if they can identify a need and then provide a service to help meet that need. As the Service as Action coordinator, I get to see a lot of the activities that students do and for the most part these are things that they come up with on their own,” she said.

That was certainly the case for 16-year-old student Siri Cyrillus. Through a friend of hers, she heard about Yellow Boat of Hope, a foundation established to help children in the Philippines get to school safe and dry in boats rather than having to swim. Intrigued by the foundation’s work, Cyrillus set up a group at SSHL as part of Yellow Boat of Hope Sweden. Last year, she and her fellow group members were able to travel to the Philippines and personally deliver boats to two families.

The tenth grader is also involved in SSHL’s Kenya Project, which helped build a school in Wagwe, Kenya, and Life-Link, a network of schools around the world that promotes peace and sustainability. While Cyrillus said these various projects spoke to something that was already within her, she never would have become so engaged without SSHL’s support.

“Had I not been at SSHL, I don’t think I would have gotten involved in these things until much later in life. I wouldn’t have had the urge to do it or believed that I could do it if it weren’t for the school,” she said. “These are things that I love doing but it’s because of the school that I had the opportunity to actually bring in other students and make it bigger than just something in my head. I had it in me to do this, but the school helped bring it out of me.” Cyrillus agrees with Cosgrave that a big part of humanism is learning to accept people from all walks of life and to respect differences. In fact, the self-described “typical Swede” from a small town outside of Stockholm said that is precisely what drew her to SSHL in the first place.

“It wasn’t until I came to SSHL that I got exposed to other cultures. I had been living in a very enclosed Swedish bubble and I wanted to get a different experience but without leaving my parents, so this was a good fit in-between the wider world and Sweden,” she said. “People are different, we have different views and religions, so when we come into contact with other cultures we have to try to come out of our little bubble and try to understand where they’re coming from.”

Your child can try boarding at SSHL for a weekend. Click here to find out more.

That gets at the very heart of what Cosgrave said is the underlying principle of SSHL’s humanistic approach.