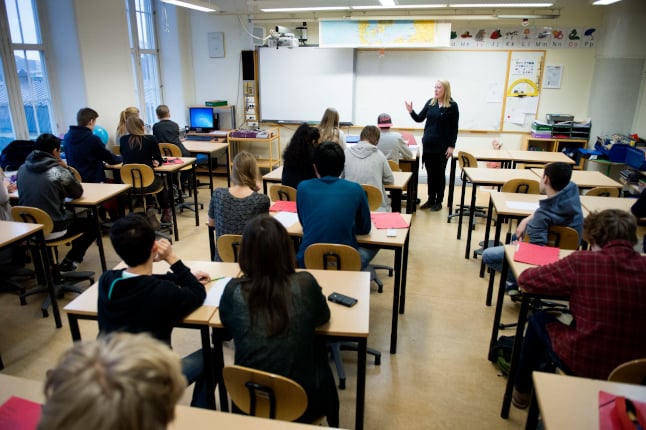 File photo of a group of 14-and-15-year-olds in Sweden. Photo: Jessica Gow/TT

The 2013 edition of the survey was a wake-up call for Sweden, which experienced a sharp drop in the results of 15-year-old students, pushing them below the OECD average and sparking debate about the country's schools.

But Tuesday's release of the 2018 Pisa ranking suggests that Swedish schools have further improved on a recovery that started with the 2016 edition, with above-average scores in reading, mathematics and science.

The report notes that Sweden is back at levels observed in early rankings, despite a rapid increase in the proportion of immigrant students, who tend to score below native-born students, in recent years. In 2018 around 20 percent of students in Sweden had an immigrant background, up from 12 percent in 2009.

In reading performance, non-immigrant 15-year-old students outperformed immigrant students by 83 score points, or 54 score points if adjusting for the students' socio-economic background, suggesting that more work needs to be done to help integrate newly arrived students from other parts of the world.

So who performed the best globally?

In reading, 15-year-olds in non-OECD member China's provinces Beijing, Shanghai, Jiangsu and Zhejiang received a mean score of 555 in reading, followed by Singapore (549) and Macao (525).

Their Swedish peers meanwhile received a score of 506 in reading, 502 in mathematics and 499 in science.

Reading was their strongest subject, with Swedish 15-year-olds the fifth best in Europe, behind Estonia, Finland, Ireland and Poland.

Out of the Nordic countries, Finland scored the highest in reading (520) and science (522), and Denmark clinched the top spot in mathematics (509).

The OECD average was 487 in reading, and 489 in mathematics and science.

Read an in-depth article about the Pisa 2018 report later today on www.thelocal.se. Are you a parent in Sweden? We would love to hear about your experience of Swedish schools. Email [email protected]. 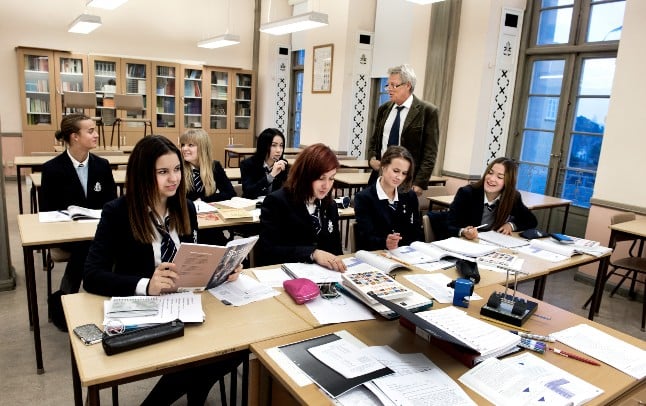 The survey was carried out as part of The Local’s investigation into schools in Sweden. We’ve previously published interviews with foreign teachers at the IES (Internationella Engelska Skolan, International English School) free school chain here, here, and here, and are now looking into other schools as well.

Since the “free school reform” in 1992, private and non-profit companies have been able to run schools in Sweden, with the state paying them for each pupil educated.

The system has come under growing criticism over the past ten years.

This has partly been due to a decline in the performance of Swedish pupils compared to those of other countries in the OECD’s Programme for International Student Assessment (PISA). The system of school choice has been blamed for increasing segregation.

In the run-up to September’s election, schools are likely to be one of the big issues.

“The school system we have in Sweden today, which is unique in the world and no other country has chosen to imitate, is a system which essentially drives increased segregation,” she said in an interview in the Svenska Dagbladet newspaper at the end of last month.

“Researchers are pretty much unanimous about that. Pupils with the worst prospects are collected together in one school and those with better prospects in another.” 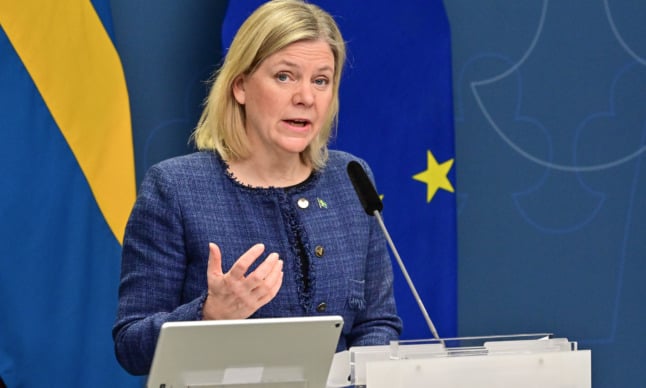 The most common complaint from parents who answered the survey was that the pace of education at municipality-run schools was too slow, and the level of academic demands placed on their children too low.

“[It’s] very slow-paced,” complained a US mother living in Uppsala. [The] education is several years behind grade level in the US.”

Mangla Sekhri, an Indian mother and IT director based in Stockholm, said she had pulled her children out of the local municipality school after a year and moved them to a school run by the IES chain.

“[I] just couldn’t continue due to [the] slow pace there. It was very slow, but now at IES things are much better-paced.”

“The only thing which bothers me is lower expectations on the kids, compared to Poland where we come from,” said a Polish respondent.

“She’s ahead of the other children because she’d already finished two years of school in Guernsey. They don’t give her learning materials of a high enough level without us asking them to,” complained a father from the British Isles.

For those who had chosen to send their children to a standard, municipality-run school, the big attraction was better integration, both in Sweden and in their local neighbourhood.

“Their peers and friends at the school are generally their neighbours as well, [so it’s] easy to hang out with school friends,” said an American living on Sweden’s northwest coast, whose four children all went through the local municipal school.

“My now eight-year-old daughter learned Swedish within months. One year on, she’s completely fluent. She has also made many Swedish friends and has playdates several days a week,” said a British father living in Gävle.

“If you are an immigrant and planning to settle down in Sweden then municipal schools are good options for your child to learn Swedish quickly,” agreed a dad from Bangladesh, living in Malmö.

Many of those who had chosen to send their children to a privately-run free school seemed to prize the additional flexibility and better discipline they offered.

“My child was already three years ahead academically and was very bored in lessons (had already learned everything in maths and science in the UK), so IES let him attend higher years group classes in these subjects,” reported an English respondent living in the middle of Sweden.

“Free schools have stricter discipline and they focus more on studies,” said a mother from Sri Lanka whose child went to a school run by the Kunskapskolan chain.

“I like the discipline and all the support that teachers give to the students,” said a mother whose child goes to a school run by IES.

A parent whose child went to a school run by the AcadeMedia chain, said they were drawn by the additional subjects, such as music and theatre, on offer.

One parent, whose child went to the British International School of Stockholm, cited the “ease of transferring to a new school when moving to a new country”, and “exposure to different cultures and points of view” as advantages.

“I love the IB. It’s one of the best but also most challenging educational systems in the world and this is widely recognised,” said one parent, whose child goes to the international school run by the Bladins Foundation in Malmö.

“Here in Malmö, the big risk is that there are no options for the final years outside the one school. If your child doesn’t achieve the academic standard required, then you are screwed.”

Who was happiest with their choice of school?

There was little variation in parent satisfaction between those who sent their children to a municipal, private or international school.

Those whose children went to a school running the International Baccalaureate programme rated the school on average at 8.3.

There was slightly more variation between types of schools when parents broke down their ratings, with standard municipal schools falling further behind on the level of discipline parents perceived at their children’s schools, and also on the quality of extra-curricular activities.

Which individual schools/chains came out tops?

When it came to the for-profit free school chains, there was more variation, with some parents loving their children’s schools and others disappointed.

Four parents sending their children to the IES chain gave the school ten out of ten, but two IES parents gave their school four or five out of ten. It was a similar story with the Kunskapskolan chain, where one parent gave an eight, another a four.

“The best thing about my child’s school is how respectful the children are towards each other,” send one parent who sent her child to an IES school. “There is a culture of the children being kind and supportive of each other. The teachers have all been amazing, and it’s been really interesting for my child to meet teachers from a huge variety of different countries.”

Several IES parents also praised how well organised their child’s school was, with high standards of cleanliness and discipline.

“I chose IES because the school inculcates the right values that I would like my children to have – discipline, respect for teachers, diligence in studying, academic excellence,” one wrote.

“The staff seem genuinely interested in our concerns. The kids enjoy being there and enjoy learning,” wrote another.

In general, the most dissatisfied parents had children at municipal schools, perhaps because they were less likely to have actively chosen them. Ten respondents gave their municipality-run school a four or five overall.

“[There is] nothing to do in their free time and an extremely low level of teaching,” complained one parent, while another complained of “incompetent staff with a lack of social-emotional intelligence”, and another of “extremely large classes”.

“I’m not entirely sure of the quality of the education,” wrote one Irish parent. “At least one of the teachers seems to think the Republic of Ireland is part of the UK.”

A particular complaint about municipal schools was the way teachers seemed unwilling to use imaginative and engaging teaching methods. “Some teachers are not able to engage the class with interesting teaching methods,” complained an Australian father.

Given the level of variation in answers to The Local’s questionnaire between both the best and worst municipality-run schools and the best and worst schools run by the free school chains, it is clearly important to talk to local parents about which school in your area of Sweden seems best.