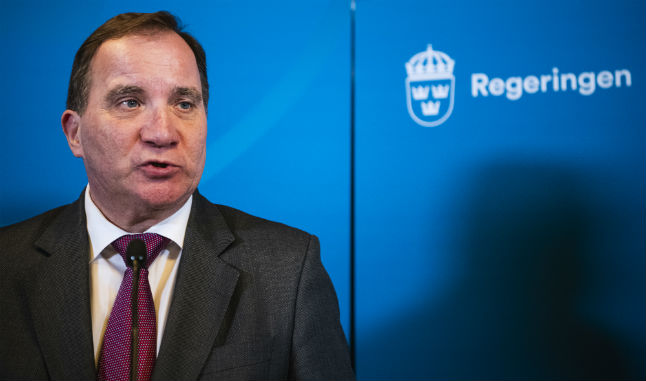 Swedish Prime Minister Stefan Löfven at a meeting with Finland's new Prime Minister on January 8. Photo: Jonathan Nackstrand/AFP
In an interview published on Friday in the Dagens Nyheter newspaper, Stefan Löfven said that he expected migration would continue to be one of the biggest issues in Swedish politics over the coming years.
“We should show that the number of asylum seekers will be fewer, really properly fewer, so we can succeed in integration,” he told the newspaper. “Then people will see that those who come here, also get out and work and contribute.”
Löfven's harsher rhetoric on immigration immediately generated a reaction from Green Party figures.
“Sweden should not join in the race to the bottom which other countries are all taking party in,” said Rasmus Ling, the party's migration spokesperson.
“That the prime minister Löfven once again argues in an interview that his party's position is that the number of asylum seekers should dramatically decrease is up to him. But I think it's unfortunate.”
In a post on Twitter, David Ling, leader of the party's youth wing, attacked the “crazy immigration politics”, and complained that the Löfven hadn't mentioned global heating.
“A big interview where the Prime Minister talks about the coming decade and he doesn't mention the climate once? What world is he living in?”
The prime minister's tougher stance on law and order appears designed to win back votes from the populist Sweden Democrats, who have surged in the polls in recent months, overtaking the Social Democrats for the first time in a string of polls in December.
The opposition Moderate Party immediately hit back, with its leader Ulf Kristersson accusing Löfven of being 'oseriös', literally meaning 'not serious' but carrying connotations of a lack of genuine intent, or properly thought through policy.
“It is not serious to say things which you don't actually mean,” Kristersson told DN.
Löfven told the newspaper he didn't agree with others in his party who argued the Social Democrats should follow their Danish counterparts and match the immigration rhetoric of the populist right.
He said that his party was working on an immigration deal with other parties in parliament, while his government was working with European Union to create a fair asylum system across member states.
“A responsible level is where we take such an amount that the adults can get a job, that the children can go to school, and that we can handle old age care and all that,” he said.
“Those that come here should get work, and we see now that it's happening faster. Before it took nine to ten years for some groups to get a job. Now it takes four years and that is falling.”