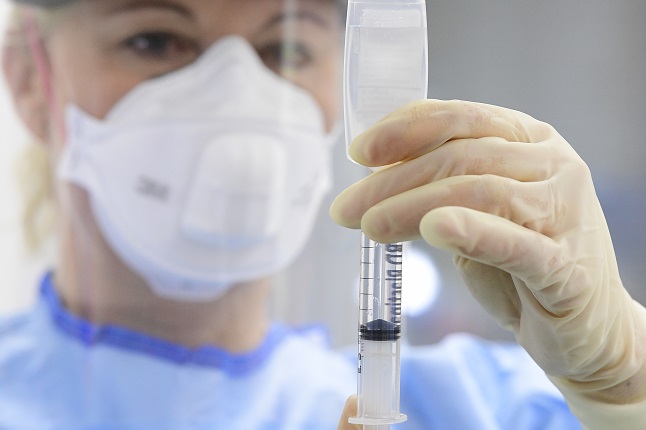 A doctor in protective clothing at an infectious disease clinic in Kalmar. Photo: Mikael Fritzon / TT

Editor's note: The situation around the novel coronavirus is changing rapidly, and this article is not currently being updated. Please click HERE for the latest updates and HERE for all our coronavirus coverage.

How prepared is Sweden?

In Sweden the Public Health Agency is responsible for protecting the public against the spread of any infectious disease.

The illness has been classified as dangerous to society by both the World Health Organisation (WHO) and the Swedish government, and this classification gives authorities increased powers to make quick decisions in order to contain its spread, including ordering quarantines where necessary.

The Public Health Agency says: “Sweden has long had a well-functioning system for the quick discovery of infectious diseases. Regions have reviewed their preparedness. The healthcare services and infection units have high awareness and routines for how both suspected and confirmed cases should be dealt with in a good, safe way.”

Preparedness also includes keeping people up-to-date on the outbreak. Regularly updated information in English can be found on the Public Health Agency's website and on krisinformation.se.

All The Local's coverage of the coronavirus in Europe can be found here. Clinics are preparing to carry out coronavirus tests, but this patient is not linked to the coronavirus. Photo: Mikael Fritzon/TT

Are large events being cancelled?

Yes. On March 12th, a government ban on all large public gatherings of over 500 people came into effect until further notice, in order to limit or delay the spread of the virus.

One reason that authorities talk about “delaying” the spread of infection is that if it is not possible to stop the virus spreading through society, it is best for this to happen slowly so that healthcare services can be prepared in terms of having sufficient hospital beds, staff, and essential equipment.

The measure is meant to limit a situation where a lot of people travel from various parts of the country or from abroad to all gather in one place, for example concerts or sports events.

Speaking at a press conference, the agency's national epidemiologist Anders Tegnell said that they were also reviewing potential guidelines for smaller events, which could also pose a risk of infection. But he noted that events with a mostly local focus did not have such a high risk, and the following day authorities said they were not looking at banning smaller events.

Sweden has also cancelled the upcoming scholastic aptitude test (högskoleprovet), which is used by many to get into university. Around 70,000 people are affected by the decision. And senior high schools, universities and adult education centres were asked to close on March 17th.

Is there any support for people whose jobs are affected?

Yes. On March 11th, Sweden announced that the country was temporarily scrapping the 'karensdag' – the first unpaid day of sick leave – in response to the coronavirus. That means workers will get sickness benefits from the moment they have to be absent from work due to illness, and the state rather than employers will foot the bill for the cost of the first day.

It came into effect immediately, and will apply for one and a half months. Sweden is also scrapping the requirement for a sick note if you need sick leave. Under normal rules, employers can demand a sick note from a doctor after seven days of sick leave.

In addition, the Social Democrat-Green government coalition is putting forward a spring budget together with the Centre and Liberal parties. This will include a proposal for short-time work, that makes it easier for companies to let staff work fewer hours instead of having to lay them off in times of crisis. That decision has been fast-tracked due to the coronavirus and will come into effect on May 1st.

What about foreign travel and checks on returning travellers?

The Foreign Ministry is responsible for foreign travel advice, which it bases partly on the Public Health Agency's information regarding the potential spread of disease.

The Swedish Foreign Ministry is currently advising against all non-essential travel overseas. This advice is in place until at least April 14th.

This follows previous advice not to travel to China's Hubei province, and to avoid all non-essential travel to other parts of mainland China, as well as to all of Iran, all of Italy, to the town Daegu and Gyeongbuk Province in South Korea, and to the federal state Tyrol in Austria. You can find the latest travel advice here.

It's worth noting that those earlier region-specific restrictions were due to the risk posed by the widespread outbreaks in those regions, while the general advice against overseas travel is more to do with the general uncertainty over the situation.

No checks, such as temperature screening, are being carried out on returning travellers in Sweden, and there are currently no mandatory quarantines for people returning from overseas travel (as long as they do not show any symptoms). That's in contrast to other countries in the Nordics and Europe, but it may change as the situation develops.

How is Sweden tracking down people who may be affected?

Sweden has been adjusting its strategy based on the current situation. Initially, people who showed symptoms after travel abroad or close contact with confirmed cases since these were the most likely cases in which the symptoms (which in many patients are similar to those of the common cold or flu) might be a sign of coronavirus.

Authorities were also working to trace the movements of infected people in order to contact people who may have been exposed to the virus, and test them if it's deemed necessary. They said that when this was done, it was typically only the closest contacts such as family members or close colleagues who also tested positive, rather than for example others who had been on the same flight or train.

But by March 12th, the focus had shifted away from testing all possible cases, and instead on protecting the most vulnerable groups. This is in order to allocate resources where they are most needed and avoid infected but otherwise healthy people coming into contact with vulnerable people.

That means anyone who is generally healthy but has symptoms of the coronavirus (including a fever and cough) is advised to stay at home and limit social contact until they have been symptom-free for a day or two, even though they may not be tested for the virus at all.

Everyone, even if you feel perfectly healthy, is asked to avoid non-essential visits to hospitals, care homes, or elderly relatives.

Measures are also being taken to avoid suspected coronavirus patients coming into close contact with other sick people, such as tents outside hospitals specifically for coronavirus tests.

Why aren't the measures more strict?

Different countries have taken different measures in response to the novel coronavirus, which might cause some confusion or concern among people who are unsure which advice is best.

Countries with more extensive outbreaks have taken the most extreme measures, including partial lockdowns in Italy, France and Spain.

Measures of this extent have not yet been judged necessary in Sweden due to the initially limited spread of the virus, and the Public Health Agency's assessment that school closures for example would be ineffective in limiting the spread of the virus and could have a negative impact on the healthcare sector (for example if parents working in healthcare need to stay home from work to care for their child).

However, this may change as the situation develops. The education minister has given municipalities and school boards increased decision-making powers, allowing them to introduce distance learning or change the timing of the school year for example. Signs warn visitors to a clinic in Stockholm not to enter if they have recently travelled overseas and have virus symptoms. Photo: Mats Schagerström/TT

The Public Health Agency said that in terms of screening returning travellers, “experiences from SARS, among other things, show that this had a small effect or none at all. For the moment, it's better to have information at the airports and to follow developments carefully.”

Instead, returning travellers from affected regions have been advised to stay at home and to call the 1177 health helpline if they experience any of the symptoms associated with coronavirus, however mild.

“In Sweden, most measures to protect from infection are taken without using force. The experience here is that a well-informed and motivated person understands and follows recommendations and that taking their own responsibility is better than coercive measures,” a statement from the Public Health Agency said.

But that doesn't mean Sweden is leaving it up to chance: “If the recommendations are not adhered to, the doctor in charge of disease control in the relevant medical region can decide on mandatory quarantine or isolation. This is possible by law since the new coronavirus has been classified as a disease that is dangerous to society.”

What can individuals do?

As well as following the guidelines given by authorities, one of the main things individuals have been advised to do is to to stay home if they have any of the symptoms of the virus, however mild, until they have been symptom-free for at least two days, and to practise good hygiene.

That means washing hands regularly and thoroughly with soap and water, covering your mouth when you cough or sneeze, avoid touching your face, and staying at home if you have been in any of the affected regions or otherwise exposed to the virus and then develop symptoms – however mild.

People in Sweden have also been urged by the Public Health Agency to avoid non-essential travel within Sweden.

Health authorities worldwide believe the virus is primarily spread by people who are exhibiting symptoms, but in around 80 percent of cases these symptoms are mild. However, even those with mild symptoms could be contagious and contribute to the spread of the virus within society.

The Public Health Agency has asked relatives to avoid unnecessary visits to hospitals, elderly care homes and elderly relatives, and stressed the high importance that people working with vulnerable groups stay away from work if showing any symptoms.

And crucially, if you are sick and especially with symptoms that could be linked to the coronavirus (such as a cough or fever) you should stay at home until you have been symptom-free for at least two days, according to the Public Health Agency.

What about people in risk groups?

The Public Health Agency has advised people aged over 70 to stay at home as much as possible. That means asking young and healthy friends, neighbours or relatives to do shopping and other errands if possible, or getting online deliveries. Prescription medicines can be ordered or collected from pharmacies by a proxy.

The agency has said this is not a full lockdown for older people, who are still encouraged to go out for walks if possible, but to take extra care with hand hygiene.