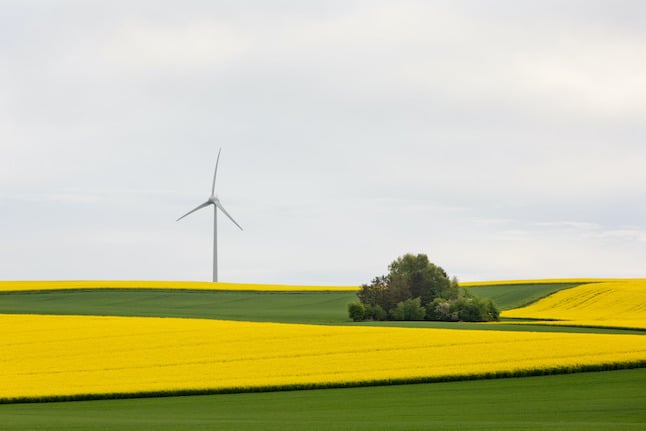 Many sources of green energy are dependent on weather and therefore are unpredictable and subject to fluctuations. So it's essential to be able to store electricity long-term in order to make the transition from fossil fuels to renewable energy.

“The amount of energy you lose when you store it has to be very low. It also has to be scaleable, from really big batteries to very small ones, to be able to use them in different applications. They are crucial as a tool for a new generation of renewable energy cities.”

Swedish company SaltX stores energy in the form of heat in large tanks filled with nano-coated salt. This heat can then be used to generate electricity when needed.

“There are a lot of days with wind that you're not going to need at that specific time and there are going to be days that you don't have any wind,” says Corey Blackman, head of technology at the company. “The whole point of energy storage is that you store energy in times of surplus, and utilize this in times that you don't have enough.” “It's very similar to electrical batteries where you would store electricity in chemical bonds,” Blackman tells The Local. “But instead of storing electricity, we store heat. Salt and water react with each other. When you put in certain amounts of heat you separate and when you bring them back together this heat is released from the system again, which you can utilise.”

The company is currently running a test at a coal-fired power station in Berlin to see how the system works in practice. The ultimate goal is to be able to deliver the same power that the coal-powered plant has from energy storage, and scale up.

Swedish company Northvolt is the largest manufacturer of batteries in Europe and is one of the main competitors to the American Tesla.

“Batteries are going to be one of the key components for our society to make this transition into renewable energy, which we obviously need to do,” says Jesper Wigardt from Northvolt.

“We are in a continent where we have a huge automobile industry, but there is no large-scale battery production up and running. As this industry makes the transition to electrification there is going to be a problem there, which we are trying to solve,” says Wigardt.

Due to the shift from fossil fuels to battery technology, the demand for advanced batteries has increased considerably in recent years. Experts expect that the European market for lithium ion battery packs will increase from 15 to 200 billion euros between now and 2040. According to Wigardt, the challenge lies in establishing large-scale production capacity to meet demand and make innovation possible.

But he says that Sweden offers benefits to companies working with this challenge.

“If you boil it down to one reason why Sweden is great place for Northvolt I would say energy. To create a battery cell you need a tremendous amount of energy going in to your production. If you care about producing sustainable batteries, then it really matters what type of energy comes in to your production. If you put your facility in a coal-based grid in China then you will inevitably build in some coal into your batteries. If you do it in Sweden, and more specifically in Skellefteå, then you can do it with 100 percent renewable energy.”

Swedish researchers are also looking into the possibility of using lignin, a substance found in trees, as a sustainable carbon fiber for batteries. Lignin is a byproduct of the paper industry and a natural resource with huge potential.

“A tree consists of several different things. One is cellulose which you can make paper from. The binder for the cellulose is lignin. When you make paper you take the cellulose, and what's left over is lignin,” explains Dan Zenkert, a professor at KTH Royal Institute of Technology in Stockholm.

Around 25 percent of a plant or tree consists of lignin. Fifty million tonnes of lignin is produced worldwide as a byproduct of the paper industry, but currently it is mainly burned as fuel. The research into lignin is part of a larger movement to find sustainable alternatives to rare earth metals.

“With the expansion of electrification, people expect that there will be a shortage of graphite,” Zenkert tells The Local. “As well a shortage of lithium and kobalt, the rare earth metals. Lignin is much greener than fossil-based materials.”

Today, carbon based on graphite is used as an electrode in batteries. Zenkert sees a great opportunity to use lignin-based fibers to make batteries more environmentally friendly in the future.

“It's still a lithium ion battery, just like the battery you have in your phone. One of the electrodes is made from graphite, which is carbon, and you can replace that with some other type of carbon. Lignin based carbon fiber is a good option to make a green type of electrode from renewable resources.”

The large amount of trees in Sweden already make it the world's third largest exporter of pulp and paper.

But Zenkert notes: “In the last 15 years there's less interest in paper, nobody buys paper products like newspapers any more. Since this is a big economy, there's a lot of research money available to find other products made from trees.”

As well as the availability of natural resources including trees, one reason Sweden is a hotspot for sustainable energy technology is a culture that supports innovation.

In 2019, the International Energy Agency called Sweden a “global leader in building a low-carbon economy” and praised the ambitious policies that made the transition possible.

“I think that in Sweden there's a strong pioneering attitude,” says Blackman from SaltX. “That has a lot to do with a culture of embracing sustainability and technology. Sweden is a great place to develop these new types of technology.”

“I think we will find new methods to accelerate the way we explore and use new materials. But it is going quite slow, the process of getting one battery on the market is almost like getting a drug on the market. We must put up these tools to make the discoveries much quicker. A large scale research initiative for Europe and improved international collaboration are crucial.”