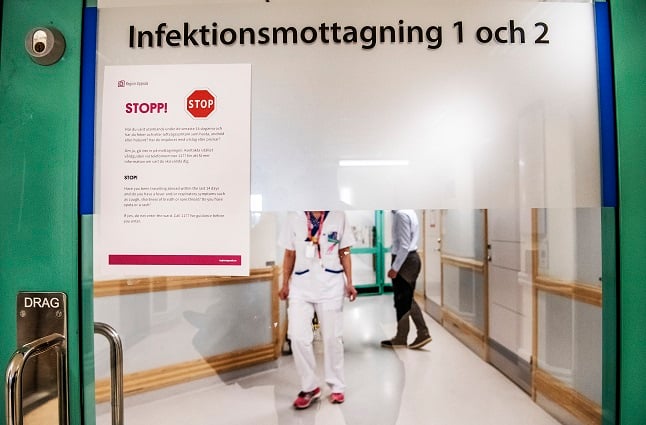 At an infectious disease clinic in Uppsala, a sign warns people exhibiting coronavirus symptoms not to enter. Photo: Tomas Oneborg / SvD / TT
Editor's note: The situation around the novel coronavirus is changing rapidly, and this article is no longer being updated. Please click HERE for the latest updates and HERE for all our coronavirus coverage.
As of Tuesday afternoon, the key measures implemented in Sweden were the following:

Most of these measures have also been taken in many other countries, but in other aspects some countries have taken different, in many cases more drastic, action.

Switzerland and France have banned events for over 1,000 people, Germany's health minister has strongly recommended cancelling events of this size while stopping short of a ban, while Switzerland and Denmark have advised people to limit use of public transport especially at peak times.

In Sweden, no such measures have been taken with major events continuing to go ahead, but Prime Minister Stefan Löfven said on Tuesday that the government was prepared to make “fast decisions” on this kind of measure if judged necessary.

THE CORONAVIRUS IN SWEDEN: Johan Carlson of the Public Health Agency and Per Follin of Disease Control Stockholm speak at a press conference. Photo: Anders Wiklund / TT

So what's the reasoning behind Sweden's current measures, and have they been sufficient?

Sweden's Disease Control unit is a national organization, which has worked to track down suspected coronavirus cases mainly through contact tracing and testing of patients who have travelled to high-risk areas, while healthcare is run at the regional level.

“As far as I can see, Disease Control has done everything well,” commented Agnes Wold, a professor in clinical bacteriology at Gothenburg University.

“We were very early, diagnostic tests were here before we had the first case, and we contact traced everyone. It's moved so, so fast and it's horribly unfortunate that there was an area of 'super spread' in the Alps, just when we had winter sports holiday. They've done what they could and did it well, and now it is up to the hospital care system.”

But other experts have said Sweden could be doing more.

Five senior scientists and doctors were critical of the Swedish response in an opinion piece published in Läkartidningen, the magazine of the Swedish Medical Association.

The writers of the article explained that a public health response to infectious disease should be designed depending on how contagious the illness is.

“The easiest way is if measures to limit the spread are implemented at an early stage, before too many people have become infected. If many are already infected, it can be difficult to limit the spread, and you can instead focus on slowing it down through a wide battery of social measures and recommendations. China succeeded in severely limiting the spread of infection through strict quarantine and isolation measures,” the article noted.

“Sweden's strategy for dealing with the situation seems to consist mainly in contact tracking and isolation of the sick. The strategy can work if there are only a few cases and [the rate of infection] is low,” it continued. The doctors behind the article argued that this strategy is hard once there are a lot of cases, and becomes even harder if the infection can be transmitted even by patients who do not show symptoms. This is because not all cases will be known to authorities, making it much harder to prevent those patients from infecting others, who could be more seriously affected.

The doctors recommended that Sweden take the situation “more seriously” and suggested following measures similar to those taken in the UK, which by March 10th has been showing a similar number of cases to Sweden, having tested more people and with a population six times greater.

The Swedish Public Health Authority has said that closing schools, as multiple countries have done, is not an effective measure to stop the spread of the virus.

“It is unlikely that healthy children will cause spread of infection. None of the outbreaks we have seen of coronavirus thus far have a connection to schools or children. Nor is there any scientific proof that shutting out healthy children or closing schools would reduce the risk of spread of infection in society, even if schoolchildren were infected,” the authority says on its website.

No-one from the authority was available to speak to The Local when contacted for further comment about potential future measures, but it has been hosting regular press conferences and updating its website with information about the spread of the coronavirus in Sweden.

The authority also points to a report by WHO which states that children aged under 18 represent a very small proportion of those reported infected by the virus in China, where most of the worldwide cases so far have been located.

WHO itself has warned against unnecessary travel restrictions and cancellation of events in most countries. Usually busy spots are almost empty in Italy, which has seen the highest number of coronavirus cases outside China and implemented strict measures to restrict the spread. Photo: AP Photo/Andrew Medichini

“Of course, people have been upset and asked why other measures haven't been taken,” commented professor Agnes Wold. “What people think is effective is not always effective, for example closing borders or cancelling flights. Then, people will come in with other means, and it's harder to track.”

“The authorities are working rather quietly. People seem to think that it takes huge, drastic things, things you can see on TV. They don't realise that the disease is mainly spread through rather close contact, like in a household or in the Alps if you go to a hotel or chalet and you're in close contact with family and friends.”

She also pointed to the responsibility of individuals to limit any possible spread of the virus.

“Some countries say 'no mass events', but small cosy bars and restaurants seem optimum for spread, so you need to think about these intimate contexts. It's not like the disease cannot spread in small groups – that's exactly where it spreads, when you are three or four people in close contact talking and laughing and eating,” she commented. This is in line with official advice from the Public Health Agency, which has repeatedly reiterated the importance of individuals taking responsibility in order to limit the spread of the disease to people in at-risk groups.

The agency has advised frequent, thorough hand-washing, but also that anyone with even mild symptoms that are consistent with the virus should stay at home.

A Public Health Agency statement on Tuesday stressed: “It is especially important that those who work in elderly care do not go to work if they develop symptoms of a respiratory infection. Relatives should also avoid unnecessary visits to hospital and care homes, and never visit if you have respiratory symptoms. Avoiding unnecessary visits protect the most vulnerable.”

Sweden's first probable community infection was reported on Monday at a hospital in Stockholm. This refers to infections that are not linked to overseas travel or close contact with a patient who contracted the virus overseas, and would signal a new phase in the spread of infection in Sweden.

According to Wold, this development means that regional healthcare and hospitals are now on the frontline in the fight against the coronavirus. She warned that ongoing staff and bed shortages in the Stockholm region in particular would be a key challenge.

“Stockholm has had an ongoing crisis for quite a while, so it's very unfortunate that so many of the people who were infected overseas came to Stockholm. We've had a shortage of nurses, especially, for quite some time so that's the biggest risk: money and nurses and beds,” said Agnes Wold. 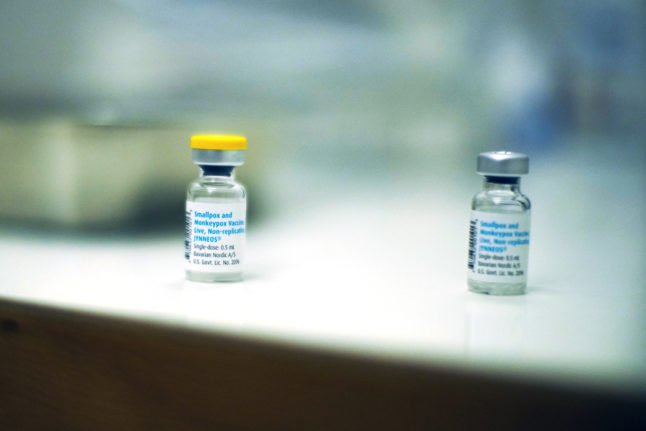 HEALTH
WHO warns ‘high’ risk of monkeypox in Europe as it declares health emergency
Url copied to clipboard!