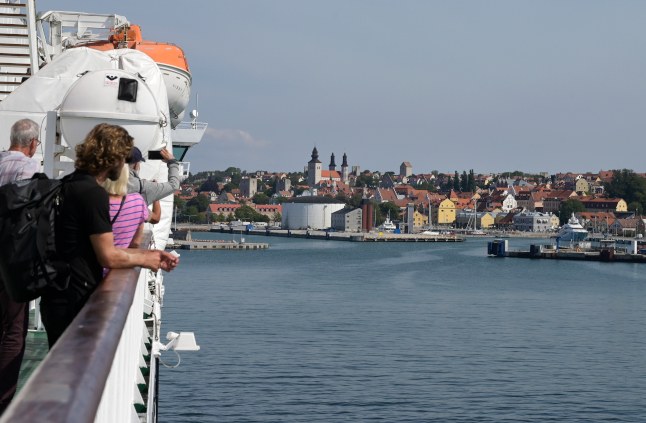 Come Easter and Gotlanders normally welcome the first wave of tourists to this beautiful island. This is a time when sun lingers on longer with each passing day, reflecting its light on the blue Baltic Sea, the limestone cliffs and the blue flowers of early spring.

This is also a time when families from the mainland usually visit their summer homes on the island. The next five months are a busy time for Gotlanders. Business starts to pick up steam during the Easter break and peaks with popular festivals Almedalen Week, Stockholm Week and the Medieval Week in summer.

“The Easter break is one of Gotland's best homecoming weekends and it is usually full house for at least five days,” says Jonathan Bergström, the owner of the popular restaurant Surfers.

This year is different. And perhaps nothing like Gotlanders remember in a long time. While Gotland has so far been spared the worst of the novel coronavirus (as of April 7th, it had only 13 confirmed cases – the lowest number in all of Sweden and far behind the Stockholm region with more than 3,000 cases), concern is growing about the risks a potential outbreak on the island would pose to its residents' health.

And the pandemic has already hit a key driver of the island's economy: tourism.

“It is really a problem because everyone is really dependent on tourists. Easter is a good time for us, because we start to get tourists who visit our open studios in the countryside and our shops,” says Gunila Axén, a member of the regional arts and design association, Gotländska Konsthantverkare & Formgivare. The textile artist adds that she has sold just half of what she did last March. The Coronavirus pandemic has put Gotland in a catch-22 situation between economic and health concerns. The island's artists, writers, restaurateurs, hoteliers, shop-owners selling Gotlandic produce and crafts rely heavily on the spring-summer season for much of their annual income.

“All conferences and bookings have been cancelled until May. We hope the TV production of Så Mycket Bättre will be back in June for Season 11. Else, there will be nothing to do for three months for the new owners,” she adds, referring to a popular Swedish television show that is filmed at the guest house. The lack of tourists could result in a gaping hole in business even after the pandemic has passed if the situation extends beyond May.

“Restaurants have no option but to reduce staff and limit the menu,” says Bergström, who has seen a 50 percent dip in customers. He hopes there will be some locals who dine out during Easter.

But islanders also know that they cannot afford to be in a situation similar to other tourism hotspots in Europe that are reeling under one of their worst health crises in a century.

The island's hospital in Visby caters to its 60,000 residents who stay all year long on the island. Health authorities are worried that an influx of tourists and summer Gotlanders will immensely overburden the single hospital.

The lack of additional capacity and anticipation of disastrous consequences if there is a rapid outbreak on the island, prompted healthcare staff from the Visby hospital to urge summer Gotlanders to stay in their permanent homes in the mainland region where they are registered, via a video message.

Gotland's infections diseases doctor Maria Amér also had a word of caution, telling public broadcaster SVT: “If people travel to Gotland and fall ill, we may have to send them back to their home municipalities.”

Cancellations began after Sweden's health authorities and the prime minister strongly urged citizens to call off their Easter travel plans, asking each individual to act responsibly. The island's ferry operator also offered full refunds to those who cancelled and a gift card of 500 kronor for those who postponed their journey. As a result, 85 percent of visitors have cancelled their travel to the island on Easter. The ferry between Gotland and the mainland. Photo: Fredrik Sandberg/TT

To support restaurateurs, one of the large grocery stores ICA Maxi has opened an outdoor food market with takeaway stalls to encourage customers to buy takeaway meals. Schools are handing out coupons to students to pick up lunch from restaurants. Media companies have heavily reduced rates for advertising.

A few resorts, like Visby Strandby, have offered a free hemester (the Swedish word for 'staycation') to Gotlanders if they can show a local restaurant bill of 270 kronor or more.

“We had bookings for two mobile homes during this weekend. They came to stay with us from Fårö after a meal from Lindgården,” says Katarina Ekelund, who runs Visby Strandby. She adds that she expects more locals to take up the hemester offer. Which path should Gotland follow next? Photo: Vilhelm Stokstad/TT

Several unions of entrepreneurs have also come together with the campaign Gotland behöver dig ('Gotland needs you'), urging islanders to buy local in these tough times.

Undoubtedly the region's entrepreneurs and artists will need a lot of government support to tide through the coronavirus crisis. But a short-term approach alone may not be enough to make the island more resilient to similar shocks in the future. It would serve well for the island to rethink how it wants to position itself in a dramatically changing world.

Uniquely positioned as in terms of geography, Gotland has a lot going for it.

The island has a high fibre connectivity of about 90 percent. It is home to a well-respected university campus. It also has a tremendous entrepreneurial spirit, with a very high concentration of small enterprises per region. There is also a growing focus on sustainability initiatives within the island.

These factors and the immediate crisis offer the island an interesting opportunity; to move beyond being perceived as only a summer haven for mainlanders, to becoming an island that is at the forefront of sustainable businesses and sustainable thought.

Gotland has the potential to become an international destination that offers the best of sustainability focused research, creativity and enterprise. For that it will need a radical vision and sustained effort from all stakeholders.

Rupali Mehra is a communications consultant and founder of Content People AB, which specialises in impact communications. She lives on Gotland. She can be reached at [email protected]