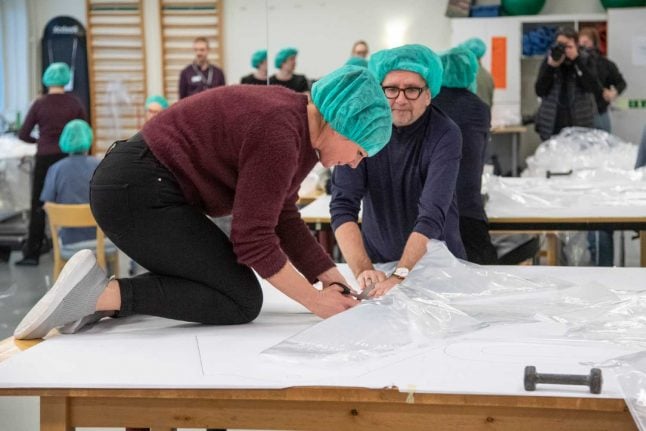 The initiative offers cabin crew — mostly from SAS Scandinavian airlines which said last month it would place 10,000 crew on furlough — courses to qualify to assist in hospitals and training for hotel workers to work in nursing homes.

“I never could have imagined when we started the new year 2020 that I would end up working here,” said Leena Engblom, a member of SAS's cabin crew who signed up to train at Sophiahemmet University, a nursing school and also a private hospital.

Why are there so many coronavirus cases in Stockholm's northern suburbs?

After a three-day crash course in communicable diseases, hygiene and treating patients and one day of practical training, Engblom, 48, started working as a medical assistant at the redbrick hospital in Stockholm.

Participants from the course have been sent to work at Sophiahemmet and other hospitals in the Stockholm region, which pay their salaries.

University president Johanna Adami said the crews' work experience meant they already had many of the necessary skills.

“They are trained in first aid, the most common diseases, and also safety and how to care for people,” Adami told AFP.

The training started at Sophiahemmet University, but after Sweden decided to close higher education establishments it is now carried out remotely online.

The assistants' work allows other staff to focus on the rising number of COVID-19 patients.

More than 850 patients have died from the disease in Sweden and the country has registered around 9,600 confirmed cases — although authorities stress this figure is likely much higher.

Only severe cases, patients with symptoms seeking hospital care, health-care personnel and staff at retirement homes are being tested.

Near to the building where Adami usually delivers her lectures, now empty of students, two yellow tents have been erected outdoors to test suspected COVID-19 cases, manned by doctors and nurses from the hospital who duck in and out in protective clothing.

Patients needing treatment are then taken to other hospitals in Stockholm. Doctor Hilmar Gerber said the scheme's graduates were proving useful.

“It's very helpful and a very good resource,” he said. While his staff were working in the tent and treating their regular patients, the assistants had spent a day preparing protective clothing for the nurses and doctors carrying out the tests.

The first round of training for 30 SAS cabin crew took place on March 31, and another 300 will be trained in the coming weeks.

SAS announced it was placing nearly 10,000 of its staff on furlough because of the drop in demand for flights amid the pandemic.

The scheme — the Skill Shift Initiative — was launched shortly afterwards by recruitment agency Novare, SAS and the Wallenberg Foundations, whose director Oscar Stege Unger is also on the board of the Scandinavian airline. Unger said it was a “tough decision” to furlough such a large number of staff.

One of the foundations provided seven million kronor (644,000 euros, $705,000) for the programme, and has since launched an initiative with Stockholm's Grand Hotel to retrain hospitality workers to care for the elderly.

In a conference room in the exclusive waterfront hotel, some 25 hotel employees watched as nurses demonstrated how to lift frail patients, help them stand and make beds.

The three-day course will land them in a care facility in the capital. Instructor Christina Riddeback, a Stockholm region nurse, said the initiative was well-timed given the rising cases in Sweden's nursing homes.

“Slowly COVID-19 is spreading among this group of people,” she said, standing next to a gurney with a dummy laid out for the students.

“Here in the Stockholm region we are in big need of this kind of support,” she said.