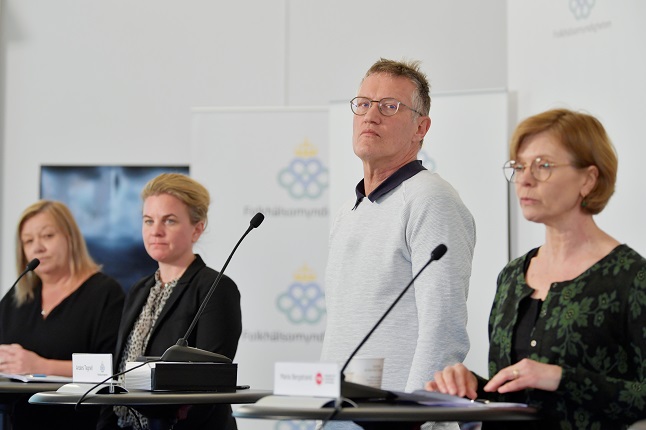 There are many complex factors which influence the figures in each country, such as the demographics of the population, the stage each country is at in the infection curve, and the effectiveness of the response to the coronavirus.

There are also slight differences in how the figures are calculated, and in this Q&A we're aiming to show how this is done in Sweden, so that you can put the daily figures from Sweden into context by explaining how these numbers are calculated, what's included and what isn't in the official figures.

Where do the daily figures come from?

Each day at around 2pm, Sweden's Public Health Agency releases the latest figures showing how many people have been confirmed to have the coronavirus, treated in intensive care, and died with the virus.

You can find these statistics here, including breakdowns by age and region, and these are the figures we report at The Local.

Only cases which have been confirmed with a laboratory test are included in these statistics. In other words, this is only a small proportion of the true number of cases.

Sweden has tested fewer people per 1,000 members of the population than many of its neighbours, although work is underway to significantly increase testing capacity with the aim of reaching 100,000 tests per week.

What do the intensive care figures mean?

The numbers for intensive care are provided by the Swedish Intensive Care Register, and refer to the total number of patients who have been treated in intensive care units since the start of the outbreak. You can also find this information here.

This figure includes patients currently in intensive care, but also those who have passed away, been discharged from intensive care, or recovered following their treatment.

And the number of patients receiving intensive care is not the same as the number of seriously ill patients. People who are especially at-risk due to factors such as old age or underlying conditions may not be admitted to intensive care if doctors judge that they would be unlikely to survive the treatment (this kind of assessment, or something similar, exists in every country). As of April 14th, there was still spare capacity in Sweden's intensive care units.

I've heard there is a delay in reporting the numbers. Why is this, and what does it mean?

The Public Health Agency receives the data from Sweden's 21 regions, and there is some delay in getting the full data, especially over weekends and public holidays.

This means that the numbers published each day don't reveal the true number of newly confirmed cases and deaths from the previous 24-hour period.

As a result, it's become usual for the numbers to rise at a slower rate over the weekends or public holidays, before an apparently sharper rise the following day. So it's not always easy to track trends day-by-day. The agency says on its website: “The number of reported cases is constantly changing as people seek care and are examined for the virus.

“There is some delay in reporting and supplementing data on new cases and deaths, so the numbers from recent days (especially during weekends) should be interpreted with caution. The statistics are compiled daily based on reports received up until 11.30am the same day. The current and previous day's number is incomplete and will only be complete the following day.”

Is there a way to calculate the true number of cases in Sweden?

It's impossible to do an exact calculation, due to a limit on how many tests can be done in Sweden, and the fact that this is a new virus so scientists don't know everything about how it acts yet.

That said, experts can make an estimate of how many cases there are in Sweden based on the data we do have, and randomised testing that has been carried out in Sweden. A billboard in Stockholm urges everyone to remember to stay at home if they feel at all unwell. Photo: Henrik Montgomery/TT

Sweden carries out so-called sentinel testing for the coronavirus, which it also does for the seasonal flu in order understand how severe the outbreak of flu is each year, and how it spreads. A number of clinics and laboratories take tests from patients with symptoms consistent with the virus, chosen randomly, and authorities analyse these samples and test them for the virus, to get an idea of the proportion of people with symptoms who have the virus (and not, say, a bad cold or other illness).

And Sweden is also carrying out random testing of the population, including people with no symptoms, to get a better idea of how many people have the virus.

In March and April, tests were carried out on 738 randomly chosen people in the Stockholm region who took their own samples. Of these, 18 tested positive for the virus (2.5 percent of the total), 689 negative, and the remaining 31 were unable to be tested as the samples didn't contain enough material.

Last week, a similar random test was launched on a random scale to cover the whole of Sweden. Around 4,000 people will be given the option to submit samples. But we don't yet have a reliable estimate of how many people in Sweden have the virus.

Sweden's Public Health Agency also takes into account data from other countries, including those which are further along in the development of the outbreak and which are carrying out higher numbers of tests, in order to estimate the future need for hospital beds.

But these calculations can only be estimates, because data from other countries may not be totally accurate, may be affected by factors unique to that country, or the country may report its data in a different way to Sweden. What's more, they focus on the anticipated need for hospital care. Since the majority of coronavirus patients are able to recover at home, these calculations only take into account the most severe cases.

How is the death toll calculated?

The statistics show the number of people in Sweden who have died with Covid-19. That's everyone who has died after testing positive for the virus; it doesn't mean that the virus itself was a cause of death for all these cases.

Sweden gets this data because its system of social security numbers (personnummer) means that all deaths are registered in a centralised system. Then the Public Health Agency can check with regions (in Sweden it's the individual regions which are responsible for healthcare) which of these deaths were people with the coronavirus — of course, this is only possible if the deceased people were tested for the virus.

This is different from how other countries report their death tolls. Some countries such as France also include deaths from nursing homes, a change to their figures that was made on April 2nd. Other countries, including Spain, Italy and England, currently only include deaths that take place inside hospitals in the official tolls.

It's currently hard to say which countries' death tolls give the most accurate picture, since this will also be influenced by factors such as testing rates.

How many people have been tested for the coronavirus in Sweden?

Can I find out how many people have recovered from the virus in Sweden?

This data is not currently being collected and published on a national level. But we do know that the vast majority of coronavirus patients make a full recovery.

At Stockholm's Karolinska University Hospital, around four fifths of coronavirus patients who receive treatment in intensive care survive the virus, the hospital's chief physician has told SVT. It's worth noting that this is only an early figure from one hospital, and that cases in intensive care do not include all serious cases of the virus.