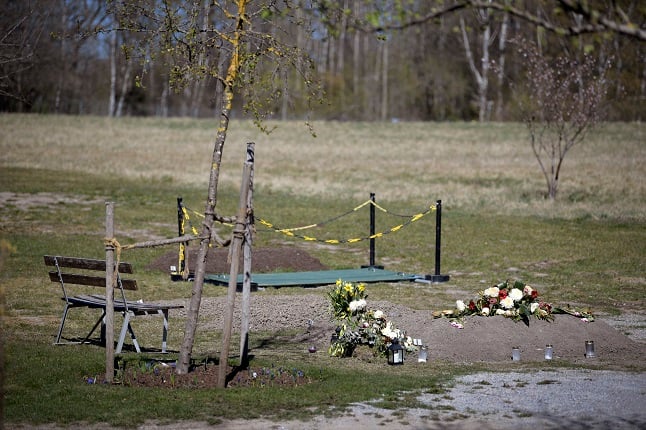 A grave in Ulriksdal, Stockholm. The capital has had three weeks with double the number of deaths typical for the time of year. Photo: Janerik Henriksson/TT

According to preliminary figures from Statistics Sweden, a total of 2,505 people died in the week of April 6th-12th, equivalent to 358 deaths each day.

The weekly figure is almost 150 more deaths than in Sweden's second deadliest week of the century, which saw 2,364 people die during the first week of the year 2000.

“It's important to clearly state that these are preliminary statistics, and that the death toll especially for the most recent weeks will be revised upward,” said statistician Tomas Johansson from Statistics Sweden.

The day with the most recorded deaths so far in 2020 was April 8th, when 380 deaths were recorded.

Stockholm, the epicentre of the coronavirus outbreak in Sweden, has seen an especially high death toll. Between weeks 14 and 16, the weekly death toll has been more than double the average for the same weeks over the past five years.

Five other regions have seen a doubling of the five-year average death toll on at least one week this year: Uppsala, Södermanland, Östergötland, Gotland, Västmanland and Dalarna.

The municipality of Sundbyberg in the north of Stockholm has seen the biggest increase in death rate for the period March 21st to April 20th, compared to its average over the past five years.

“Both in Sundbyberg and Borlänge, more than three times as many people have died during 2020 than the average [in the same period] for the years 2015-2019,” said Tomas Johansson. Nine pages of obituaries in a Dagens Nyheter Sunday edition this month, compared to a usual four. Photo: Jonas Ekströmer/TT

Statistics Sweden has made its data on deaths available earlier than usual, with the aim of giving a clearer picture of the impact of the new coronavirus.

While not all of the recorded deaths will be due to the virus, it's likely that the virus is the main reason for the increase or 'extra' deaths compared to previous years, and so these figures help us get a clear picture of its impact on society.

In Sweden's official death toll for the coronavirus, the country includes deaths that take place in hospitals and care homes as well as those which take place elsewhere.

This is possible because Sweden has a centralised register of deaths, and the Public Health Agency is adding these to the official death count where it is found that the deceased person had the virus. That's in contrast to many countries worldwide which only include hospital deaths in their official figures.

A recent New York Times study looked into the increase of deaths in 12 countries compared to averages from previous years, to get an estimate of how many coronavirus deaths may be missing from official tolls.

Sweden's death toll was 12 percent higher than its historic average, the study found, and the reported coronavirus deaths more than accounted for this difference, suggesting that deaths from other causes were lower than the historic average for this period.

This was also the case in Belgium where the death toll was 25 percent higher than its own historic average.