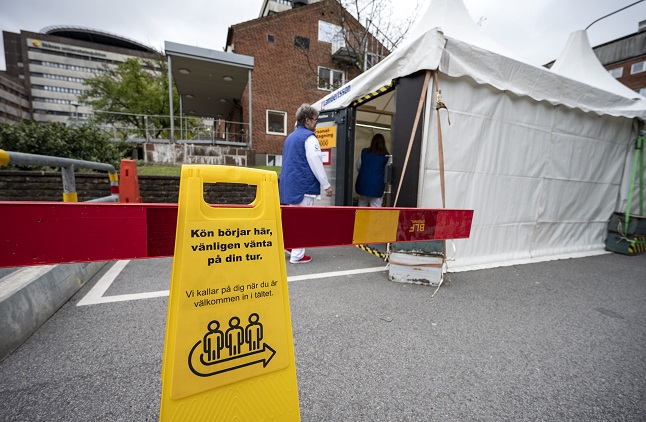 Healthcare workers with symptoms are tested for the coronavirus outside Skåne University Hospital in Lund. Photo: Johan Nilsson/TT

The issue isn't necessarily a lack of capacity to carry out more tests. On April 17th, the Public Health Agency said that the country had capacity to test around 50,000 samples per week, and on May 5th, Health Minister Lena Hallengren told Swedish TV that capacity had been further increased and laboratories across Sweden could now analyse 100,000 tests each week.

In Sweden, it's the country's 21 regions which are responsible for healthcare, and questions are being raised about how they should be acting to reach the goal.

In Region Skåne, the number of tests carried out has risen by 25 to 30 percent over the past week, to reach 1,200 weekly tests. This has included drive-in testing for employees in the health and care sectors. Region Sörmland currently carries out around 400 tests per day, and told the TT newswire it plans to increase this figure, primarily through increased self-tests.

But officials in other regions, especially those that have thus far seen a limited spread of infection, are unclear on what they should be doing.

“We are already taking a lot of tests. It isn't possible to increase it much more,” said Micael Widerström, the infectious disease physician in Jämtland.

In Stockholm, around 1,000 people are tested for the virus every day. So far, priority has been given to those who are receiving treatment in hospital for coronavirus symptoms as well as healthcare workers with symptoms consistent with the virus, in line with Public Health Agency guidelines.

The current guidelines on prioritisation state that employees in other jobs with an important societal function are the third priority for testing (such as police officers and emergency services workers), and other members of the general public are the fourth group.

But if the numbers who are tested is going to increase, some regions are calling for clearer guidelines.

“The government has to make itself clear. Which other groups should be tested, and with what goal?” Ella Bohlin, a Stockholm councillor with responsibility for healthcare development, of the Christian Democrat party, told TT.

Per Sikora, who is responsible for testing in Västra Götaland, said: “The fact that Sweden can do 100,000 tests in a lab, doesn't mean anything as long as we are unable to send out tests to those who need it.

“Starting to test, for example, groups of police officers or preschool employees, or private citizens, is nothing that there have been any guidelines on so far. So far, the focus has been on the top two categories [people in hospital and healthcare workers]. We haven't received any request from either the Public Health Agency or Disease Control to test others, so we aren't doing it. That has to come from the state authorities.” Most of the regions contacted by TT are continuing to test within the two top priority groups.

“When the capacity is increased sufficiently we will continue with priority group three [people in jobs with an important social function] but it's still too early to say when that can happen,” Skåne infectious disease physician said in an email response.

It's also possible that testing of people in other key jobs may need to take place outside the healthcare sector, for example by private companies.

“Up till now, we have been able to do testing in quite a controlled way within the care sector at our testing centres and to a certain extent through self-tests at home. But if you scale that up and scale it outwards in society, it becomes a challenge,” said Per Sikora in Västra Götaland.

In some places, testing is already happening among other groups.

In Jämtland, Micael Widerström said: “We are already offering testing besides the prioritised groups in order to maximise the [testing] capacity fully.”

But he said that a national directive should be made clear. “Maybe you need to give out more information that 'this is available, it's not as hard as before'. I think there's quite a large desire to be able to have these tests.”

In Sörmland, the regional head of healthcare Magnus Johansson said that it is only helpful to test people with symptoms. “It doesn't work on those who don't have symptoms, that's how the method works. So it's not the case that we should test all residents of Sörmland, rather it's those with respiratory symptoms. So how many tests there are also depends on how many have respiratory symptoms or symptoms of a cold.”