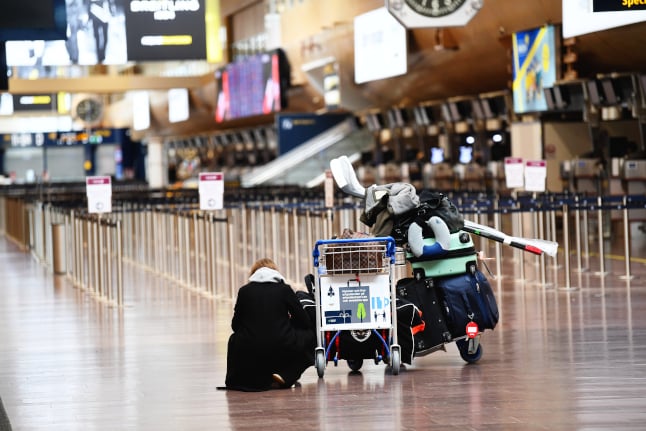 Even if you're exempted from the entry ban, there are other obstacles such as airlines not flying. Photo: Fredrik Sandberg/TT

The ban applies only to people entering Sweden from a country outside the EU or Iceland, Liechtenstein, Norway, Switzerland and the UK.

But there are a few other exceptions.

Swedish citizens are still able to enter the country, as are people with a residence permit who “have an established home in Sweden”. However, people who have received a permit but have not yet moved to Sweden will generally not be exempt from the entry ban, the Migration Agency advises on its website.

“If you do not have a home in Sweden where you have previously lived, you may be denied entry to Sweden,” says the Migration Agency. But for example someone who has applied for an extension to their permit and had to travel abroad during the processing period, but who have previously lived in Sweden may be exempt.

“It is the responsibility of the person seeking an exemption to demonstrate that she or he is covered by the exemptions to the ordinance,” says the Migration Agency.

The decision to introduce the entry ban was made by the Swedish government in March in line with EU recommendations to curb the spread of the coronavirus, but it is up to the border police to enforce it and assess each case.

If you have a residence permit and you normally live in Sweden, how should you prove your right to enter?

The Migration Agency advises that “you can, for example, provide population registration certificates, rental agreements, rent receipts, and bills that are addressed to you and marked with the address in question”.

“There is no minimum time for when your home in Sweden is considered to be established. It is the border police who assess and (if necessary) investigate this.”

There are a few other exceptions to the entry ban, for example, according to Swedish border police:

Foreign nationals coming to work in Sweden to produce food in the agricultural industry, for example berry pickers or people working in dairy production, are also not affected by the entry ban. However, according to the police, that does not include “foreigners who are going to work in eg forestry or gardening with flowers, trees, bushes, grass or other forms of horticulture which do not carry fruits, vegetables or berries”.

The entry ban does not affect the right to asylum.

You can read more about the entry ban on one of these official sites:

This article was written in response to a reader question. How can we help you navigate life in Sweden? If you have any questions or feedback, please feel free to email [email protected].