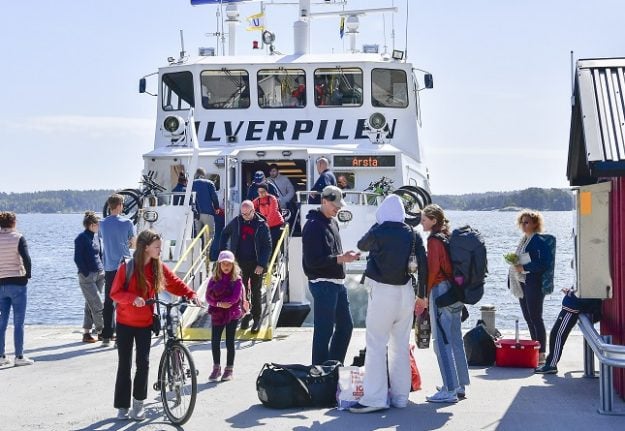 People travel by boat to an island in Stockholm's archipelago during the May public holiday weekend. Photo: Jonas Ekströmer / TT

First and foremost, all the guidelines in place in Sweden from washing your hands to avoiding social contacts are there to reduce the risk of catching and spreading the coronavirus. So if you don't follow them, there's a chance you will put yourself and others at risk.

There could also be consequences from a legal perspective, but in practice that's usually not very likely for individuals.

A few of the restrictions are formal government decisions, including the ban on visits to elderly care homes, a ban on crowding at restaurants, and a ban on gatherings of more than 50 people.

People who organise gatherings in violation of this rule can face fines or even imprisonment of up to six months, and police have the power to shut down such gatherings. In the case of restaurants, inspections are coordinated by regional infectious disease physicians and if a business is found to be violating the rules, they can be ordered to close until they prove they have made the necessary adjustments.

As well as these rules which must be followed, the government and individual ministers sometimes give clarifications on how to follow the more general recommendations.

For example, the government and health authorities recently clarified that while non-essential domestic travel should be avoided, trips of up to one to two hours by car were acceptable if social distance was maintained and the other guidelines were followed. This was a recommendation and not a binding ban or restriction, so there's no likelihood of a legal sanction for people who ignore it. Most of Sweden's coronavirus guidelines come from the Public Health Agency. Like other state agencies, it has the responsibility of putting together guidelines for members of the public and businesses.

Some of these are föreskrifter, which are binding rules and have the same legal status as laws, meaning people or companies that break them could face sanctions.

But for private individuals, most of the guidelines are called allmänna råd. Although the literal English translation is “general advice”, both the prime minister and general director of the agency have said that they aren't optional and should be followed all the time.

The idea of these guidelines is that they tell people how to comply with the laws and regulations already in place.

Sweden has a law called the Communicable Disease Act, which states that everyone in Sweden must “take reasonable precautions to curb the spread of infectious diseases”. The actions which are “reasonable” to take depend on the circumstances of the individual and Swedish society as a whole. So what the allmänna råd do is tell us that in the current situation, these “reasonable precautions” including keeping distance from others in public spaces, working from home if we can, and so on. A large sign in Stockholm reminds people of the 'two-metre rule', stressing it should be followed 'as often as you can'. Photo: Fredrik Sandberg / TT

It is possible to be prosecuted under the Communicable Disease Act if you are found to have infected others with the coronavirus either knowingly or through negligence; the same applies to other socially dangerous diseases such as HIV. You can face investigation if you do not get tested for the coronavirus even after being repeatedly called for a test, for example via contact tracing.

But in general, you are unlikely to face legal consequences for failing to comply with allmänna råd, for example if you travel by public transport or longer than two hours, or fail to keep social distance from others in public places.

In fact, one reason that these guidelines haven't been made legally binding is that the Public Health Agency has outlined both the difficulty in enforcing strict laws, and the need for some use of common sense in adapting to different situations. It won't always be possible to keep two metres from someone, for example if walking on a narrow path or paying for something at a cash till.

Under the Communicable Disease Act, it's possible to put an individual person in quarantine or put a specific area under a cordon, making it illegal to travel in or out of that area. But that's considered a serious measure, and should only be introduced if truly necessary in order to curb the spread of the disease. Since the coronavirus has already spread to all of Sweden's regions, that's unlikely at this stage.

But parliament has also passed a law that gives the government power to impose harsher restrictions without first seeking parliamentary approval. These could include the closure of any or all schools, transport hubs, or shops, for example, if necessary to curb the spread of the virus. The government was granted these powers in early April but has not yet used them.