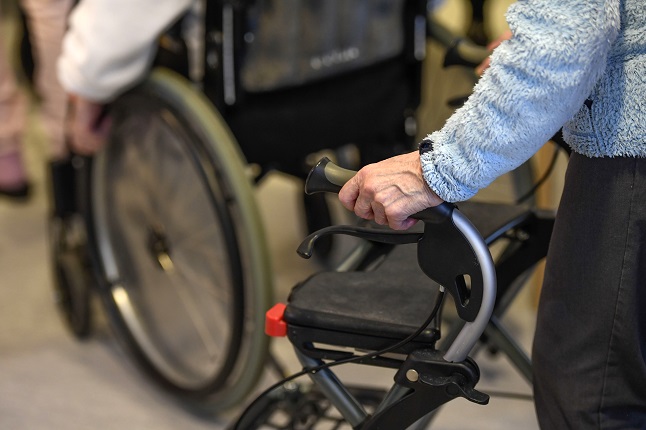 Residents of elderly care homes have made up around half of those over 70 who have died of coronavirus in Sweden. Photo: Pontus Lundahl / TT

The Public Health Agency and government have said the inability to keep the virus, which typically causes most serious illness in elderly people, out of care homes has been one of the major failures and regrets of the Swedish response to the pandemic. Around a half of deaths of over-70s have occurred in this type of residence.

Now the watchdog says it has identified “flaws of a serious nature” in ten percent of the care homes it has looked into, relating both to general care and the coronavirus response, including care home residents not getting access to an individual assessment by a doctor, and staff continuing to work after showing symptoms.

“What we see is that the majority of elderly care facilities can handle the current situation. It's tough and demanding, but the majority are dealing with it comfortably, or well. Some important factors are active leadership, and active work with fundamental hygiene routines,” said Wallström at Wednesday's coronavirus press conference.

She said that many of the flaws uncovered were linked to “complex problems which might be to do with skills provision, challenges with bank staff and temporary staff. It can be hard to get continuity. Some of them are what we call systemic problems, we know some ways they can be addressed but it's clear we have a way to go”.

As well as the investigation into elderly care homes, IVO has received 3,000 complaints of risks within the health and care sector as a whole since the start of March.

More than a third (37 percent) were directly related to the coronavirus, and around 40 percent were reports of risks judged to be “serious”, but that proportion rose to 54 percent within the elderly care sector.

“A lot of what we see and are told about is of a serious nature and means risks for patients and consumers which we have to act on,” IVO general director Sofia Wallström said.

“The proportion of serious flaws is increasing. In the middle of April it was around 23 percent and we're just over 40 percent now. Most indications of problems relate to the Stockholm region, few relate to the regions that have been less severely hit by the coronavirus, for example the regions in the north,” she said.

“Elderly care stands out in regard to Covid. The type of risk that is greatest is hygiene in care. Within the healthcare sector, it's in inpatient, somatic care where we get the most indications of risk in relation to Covid.”

However, the watchdog could not pinpoint a clear direct cause for the increase in serious cases.

“It's difficult to know, it could be because more things are coming to light, we are finding out about more. It could also of course be because things are getting more serious,” said Wallström.

But she added that it's likely there is still more that the watchdog has not been made aware of, saying: “In some areas there is also a fear of talking about problems that occur and this is of course dangerous for patients and consumers if people don't dare to speak up about it.”

IVO receives reports of risks and possible flaws through a range of channels, and has recently added a new tip-off function to make it easier for staff and patients to report flaws anonymously, which Wallström urged staff to use if they were aware of deficiencies.

As well as the investigation into care homes, IVO is also looking into prioritisation into intensive care after warnings from healthcare staff in Stockholm that patients needing intensive care, especially elderly patients, are not receiving it despite there still being several hospital beds available in the region.

MORE ON THE CORONAVIRUS: