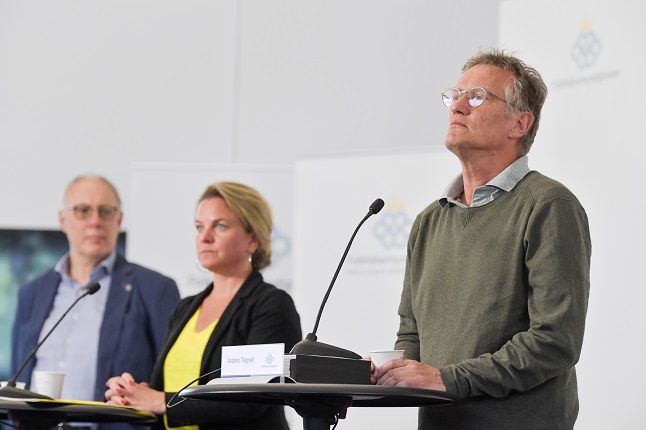 Sweden's decision not to impose a strict lockdown as seen elsewhere in Europe has attracted comment and criticism for months. Tegnell has regularly stated that the Swedish Public Health Agency believes Sweden's strategy of keeping the number of cases within the limit the healthcare can handle through mostly voluntary measures is working mostly well, despite admitting failures in testing capacity and protecting residents of elderly care homes.

At Wednesday's press conference, many of the questions focused on Tegnell's recent comments to Swedish radio, in which he said Sweden would have chosen a strategy “between what Sweden did and what the rest of the world has done”, had authorities had the knowledge they now have at the start of the outbreak.

On Wednesday afternoon, he clarified that the agency was still confident in its strategy, but was constantly receiving new information about the virus and evaluating the methods used.

“It has spread in the news that I, and we at [the Public Health Agency] believe the strategy we used was wrong and should be changed in a drastic way. That is not at all the case. We still believe that the strategy is good, but there are always improvements, you can always make it better,” he clarified.

Tegnell told The Local in May that the agency was “constantly changing” its communications in response to new challenges. One example was the case of restaurants; the agency introduced restrictions after seeing they posed a high risk of infections, and then tightened restrictions so that those breaking restrictions risked being closed down.

“We still think that the strategy is good, but you can always make improvements, especially when looking back. I personally think it would be rather strange if anyone answered anything else to such a question. You can always do things better,” he said on Wednesday, adding that he did not necessarily think he had been misquoted, but that his comments had been overinterpreted. Asked by Ekot for examples of what could have been different, Tegnell cited improving preparedness in elderly care homes, building up more testing capacity earlier on, and possibly not closing schools-for over-16s.

“We haven't fully evaluated this measure, but it may be the case that this only had a small effect and it wasn't necessary to do what we did. There's still a lot where we don't know exactly what the effects were, especially what has been done in other countries where there may be things we could have done in Sweden,” he said.

The Local asked Tegnell what the barriers were to introducing widespread testing and tracing at an earlier stage in the pandemic.

“The barriers in the very beginning was mainly laboratory capacity but also healthcare capacity because testing is a very complicated chain of events that needs to happen, you need to have staff and resources in each part of the chain. In the beginning it was mainly lab, now we have plenty of lab capacity but there is still a certain lack of capacity in the healthcare sector to really make as many tests as possible,” he told us.

“I'm not sure [if increased testing would have reduced the spread of infection]. I talked to my Norwegian colleague about that and he was not sure either that a massive amount of testing makes much difference but it's difficult to judge. Sometimes massive testing makes a difference like in South Korea; in other places it seems to make much less of a difference.”

Asked whether this would inform plans for future preparedness, Tegnell told The Local: “I think that Sweden will discuss a lot about preparedness in the future, about capacity in many different sectors, maybe not least the healthcare sector.” A journalist from Reuters asked if Sweden was too wedded to its plans for an influensa pandemic, something that Tegnell's Norwegian counterpart told The Local Norway was a flaw in the Swedish strategy. Tegnell's response was that influenza-based plans were the basis for most countries' strategy, since influenza has historically caused the most pandemics.

The question of asymptomatic transmission was also brought up, to which Tegnell said the agency's assessment is that this does occur and has always been accounted for in the agency's planning, but it is “still very unclear” to what extent it occurs.

He was also asked if the agency should have adhered to a so-called precautionary principle by introducing stricter restrictions, even if it was not clear at the time whether they would work. Such a strategy may have been more in line with what happened in Denmark, where the Health Minister said of that country's school closures: “We have no evidence that everything we are doing works. But we would rather take a step too far today than find in three weeks that we have done too little.”

Tegnell said there was no link between doing more and taking precautions, saying “doing more can also mean doing more damage”. He also pointed to the different outcomes between countries that took similar measures, saying that Norway and the UK both introduced hard lockdowns, with a positive effect in Norway but a high death toll in the UK. The UK did however introduce its measures at a later stage of the outbreak.

And the Swedish state epidemiologist acknowledged the mixed attention the Swedish strategy has received abroad, telling Dagens Nyheter: “There has always been some ambivalence towards the Swedish way of handling the pandemic, sometimes they've thought it's exciting to learn from it and sometimes it may be seen as a bit of a threat because it could indirectly undermine some drastic measures they took themselves.”

Also at Tuesday's press conference, Tegnell said that Sweden “was not seeing the downturn we were hoping for”.

The death toll had risen to 4,542 on Wednesday, a figure that includes all deaths where the person tested positive for the coronavirus within the 30 days prior. Tests are currently carried out according to the following priority order: people requiring medical care for coronavirus-like symptoms, staff working in the medical or care sector and residents of care homes, and staff in socially important functions outside healthcare and care.

But the numbers and groups who are tested have changed over the course of the outbreak, so this figure likely does not exactly represent the true death toll. Preliminary figures from the National Board of Health and Welfare from late April showed that the numbers of all deaths where coronavirus was listed as a cause of death, with or without an official diagnosis, were around ten percent higher than the Public Health Agency's own figures.

“Cases in intensive care have arrived at a sort of plateau across the country as a whole. The number of newly reported deaths is low, even though of course it's still far too many people who are dying,” said Tegnell.

“We see a bit of a plateau and not the continued fall we are hoping for, so it's very important to stay home when ill, avoid large social gatherings, limit your travel, avoid social contacts if you're in a risk group.”