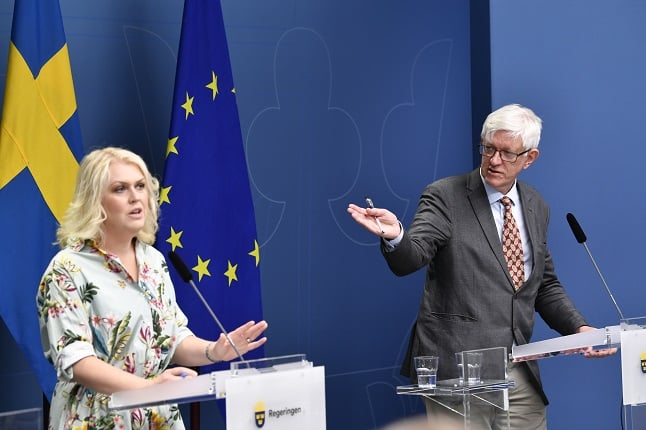 The government announced that a further 5.9 billion kronor would go towards testing for the coronavirus, in addition to the 1 million kronor pledged earlier in the outbreak. There are two types of coronavirus tests; diagnostic tests which tell you whether you currently have the infection and antibody tests which can tell you if you have previously had it, and this funding will cover both types of tests.

Currently, coronavirus testing is carried out according to a priority system, with tests available to patients needing medical care for their symptoms, healthcare staff and care home staff and residents, and — over the past few weeks — people in other key jobs such as police officers and emergency services workers.

Under the new scheme, there would still be a requirement for a doctor to refer you for a test.

“It's not just if you yourself think you coughed a bit yesterday and think it's Covid. But it's about extending the testing so that it isn't just about people with very serious symptoms, rather it will be widespread,” explained Health Minister Lena Hallengren.

Another caveat was that Hallengren could not give an exact date of when this wide scale testing would begin.

“It looks different in different regions,” she told the TT newswire. “Some have already been testing everyone with symptoms, others have had a slightly different focus. But each region is responsible for infectious disease control there.”

In many cases, the tests in question will be ones that you can carry out yourself at home.

And if you test positive for the virus, contact tracing will be carried out. That means identifying people you have had close contact with and may therefore be at risk of having caught the virus.

Karin Tegmark Wisell, head of the Public Health Agency's department for microbiology, said earlier in the week that contact tracing was suitable in the beginning and later phases of an outbreak, but not during the peak due to the resources needed.

“In a pandemic phase, which Stockholm reached in March, this type of testing wouldn't work. It's not possible to test millions of people, so instead it was important that those with symptoms isolated themselves. As more and more regions go into a phase where the rate of illness reduces, it's important to return to stopping the spread of infection and carrying out contact tracing,” Tegmark Wisell explained.

Sweden has carried out fewer tests per capita than its Nordic neighbours and many other countries, and failed to reach the Health Minister's goal of carrying out 100,000 tests by mid-May. Almost 36,500 coronavirus tests were analysed in Sweden last week.

On Wednesday, The Local asked state epidemiologist Anders Tegnell what the barriers were to introducing widespread testing and tracing at an earlier stage in the pandemic, and whether such a strategy would have reduced the spread of the virus in Sweden.

He said that the barriers were laboratory capacity at the start, and a lack of healthcare staff and resources, adding: “I'm not sure [if increased testing would have reduced the spread of infection]. Sometimes massive testing makes a difference like in South Korea; in other places it seems to make much less of a difference.”