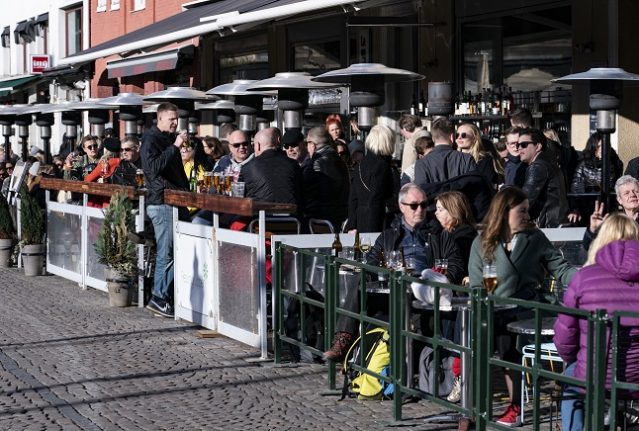 People crowding a terrace bar in Malmö in late March, when its Nordic neighbours were locked down. Photo: Johan Nilsson / TT

Scene: A Swedish family at their kitchen table, waving goodbye to the daughter of the house.

Later that same evening. Little brother is stuck in front of the telly playing video games, grandma looks on disapprovingly: “I'd recommend you to go to bed at nine, dear, because…”
“Sorry, gran – you lost me at 'recommend'”.

When it comes to the coronavirus, the Swedish terminology is confusing (you can choose not to listen to a friendly piece of “advice” or a “recommendation”, even though the Public Health Agency's so-called recommendations have their basis in law), not to mention the content (different state agencies have called on the public to keep distances of one metre, two, or simply an arm's length). More than anything, though, these soft, not-uncool-and-hardcore-RULES-rules-but-more-like-suggestions-rules feel wildly inappropriate fighting anything more serious than a case of bad dress sense.

Just look at the way our packed city cafés and restaurants welcome their guests.

First on many of the chalkboards I've seen around the city centre, it's what's on offer for lunch or dinner, then the price of alcoholic beverages, thirdly the opening hours or a house specialty – and then, right at the bottom, a squeezed-in sentence about the virus: “Remember to keep the distance, have a sunny day!”. A global pandemic, reduced to the threat level of mosquitoes.

But who can blame them? The hospitality industry is fighting to stay afloat, and if the prime minister insists we're doing fine and the health authorities relax the few regulations set up in the first place, such as allowing all travel within the country as long as you're symptom-free, then no wonder it's the end of the discussion. And not just for restaurant owners. Endurance (uthållighet) has been the word du jour when Swedish authorities motivate their controversial coronavirus approach, as if the pandemic was some weird, nihilistic kind of character Olympics. But surprise, surprise: it turns out that just like the virus didn't weaken once it crossed Swedish borders, Swedes didn't possess magical powers of supreme patience. We started flipping the finger at the rules in May, just about the same time as countries that had gone under a full lockdown did.

The authorities have clearly overestimated Swedes' capacity to handle complex societal crises on an individual level.

With more humility, they would have accepted that Swedes are just simple human beings, like the rest of the world's populations. But the lure of living up to the Folkhemmet ideal is strong. The near-mythological “People's Home” is a central political concept in Sweden, also used to describe our particular brand of socialism light that stretched from the 1930s to the 1970s.

But much has changed since then. Sweden is now officially the world's most individualistic country. We're not necessarily less emphatic, but we're certainly more self-obsessed.

When Sweden's domestic travel rules were eased, many of us wondered why. Sure, the warm weather is nice and all, but aren't people still dying daily from this thing? The Public Health Agency has said that if they hadn't allowed domestic travel for the summer holidays, people would have done it anyway – but in an uncontrolled way.

That's an idea strikingly similar to a line of thinking among some Swedish parents: to (illegally) supply your underage teenagers with a bottle of booze, reasoning that they'd get drunk anyway, only in a riskier, more uncontrolled way.

But citizens aren't children, you object? Well. Tell that to the teenage girl who laughed in my face when I asked her to keep distance instead of practically sitting in my lap (to add insult to injury, the girl phoned a friend two seconds later to loudly tell him/her all about the crazy “The end of the world is nigh” lady on the bus). Now, why did we ban spanking again?

In all seriousness, a little-discussed consequence of Sweden's Covid-19 strategy is that the people rather than the politicians could be held responsible for its failures.

Come election time, the country's officials can simply shift the burden to the (supposedly) well-informed masses, trusted with navigating a high-risk pandemic on their own. In other words, what seemed like the least despotic coronavirus course in Europe, safeguarding civil rights and liberties, might have an undemocratic built-in trap. We've already heard Foreign Minister Ann Linde blame overworked and underpaid health workers for the disaster at our elderly care homes.

If you're a responsible adult in despair, you may want to consider moving across the Baltic. According to professor of Infectious Diseases Dr Björn Olsen, government critic and not one to mince his words, Finland is “a Sweden for grown-ups”.

One Finnish respondent puts it this way in The Local's recent survey of foreign residents' view of Sweden: “The promise was: you pay high taxes and in return, we'll take care of you in case of need. The reality has happened to be the opposite.”

Perhaps when faced with a global pandemic, the nanny state – basically the essence of the welfare state, only in more condescending wording – would have been the right idea after all?

Around 45,000 people will be able to cram into a Stockholm arena to watch Elton John next month – but will the main act even be allowed to cross the border? Photo: AP Photo/Chris Pizzello

For those of us with tickets to the twice-delayed Stockholm leg of Elton John’s farewell tour on October 1st, this week brought long-awaited news: restrictions on large gatherings, along with most other binding pandemic rules, will be removed in Sweden from September 29th.

So the concert is on: 45,000 mask-free Elton fans are authorised to gather in the Tele2 arena two nights running, jostling in line, no social distancing, no masks (this is Sweden, after all), and no vaccine passports. We can hang out in the bars before and afterwards, and cram on to the metro on the way there and back.

But one person might theoretically not be allowed to join them: Elton John himself.

We know he has been vaccinated – he has even appeared in British government campaign videos urging people to get jabbed. But he is British, lives in the UK, and Sweden has a general ban on travel from non-EU countries, the UK included.

Of course, the list of exceptions to the ban is extensive: Swedish citizens can always enter the country, unconditionally. There are 100,000 of them living in the UK alone, and as anyone who has flown the London-Stockholm route can testify, they always account for a huge proportion of the people on the plane. Anyone who is a legal resident of Sweden can also enter the country.

There are a few more exceptions: “highly-qualified workers” can be exempted from the ban if “the work is vital from an economic perspective and can’t be delayed or carried out at a distance”. An individual border guard will have to decide whether Elton’s 38 platinum albums qualify him, or whether the more than 80,000 tickets sold for his concerts make this economically vital for Sweden. Alternatively, the government can grant him a personal exemption.

Alternatively, Elton could just come via Denmark, which is admitting fully-vaccinated Brits, among others. Sweden allows free entry from other Nordic countries, so Denmark is a wide-open back door to Sweden.

Meanwhile, millions of people who live in Sweden have family abroad, and for them there is no blanket exemption. Being subject to Denmark’s travel regulations adds a level of complexity that makes it hard for people to plan their travel. And while Zoom has helped ease the pain of enforced separation, not being able to hug, share a dinner or a drink, go for a walk, watch TV or play games together is taking its toll.

Norway, which otherwise has had draconian border restrictions, has at least finally recognised the importance of families by making an exception from the travel ban for certain close family and romantic partners (though not siblings), even if testing and hotel quarantine will be obligatory on arrival. But it’s important to remember that for many people, friends or siblings who live in different countries are just as essential to well-being as parents or adult children are for others.

Other EU countries have gone one step further, and are now allowing people from certain countries who are immunised with EU-approved vaccines to enter their countries without further testing or quarantine. Most recently, France has added the US to the list of countries from which it will accept vaccinated travellers. Germany, Spain and Italy are also accepting vaccine certification from certain non-EU countries. Swedish interior minister Mikael Damberg has hinted at doing something similar, but no date and no details have been announced, and nothing is confirmed. Training border guards to recognise foreign vaccine certificates is a complicating factor, but if other countries can do it, Sweden can too.

Vaccines are not a panacea. We know that people can still get ill after being vaccinated and can still spread the disease. However, the risk of both is significantly reduced. And like most other countries, with vaccine coverage soon at 80 percent, Sweden has opted to accept a level of risk on the home front as the price of our freedom to enjoy culture, to work and socialise.

And if they don’t open up to vaccinated travellers, what is Sweden’s long-term plan? To keep outsourcing border control to Denmark? To keep making random personal exemptions for VIPs? The current situation is starting to look absurd – and all the while those of us with family and friends elsewhere are suffering. It’s time for Sweden to take back control of its borders, and let vaccinated people in.