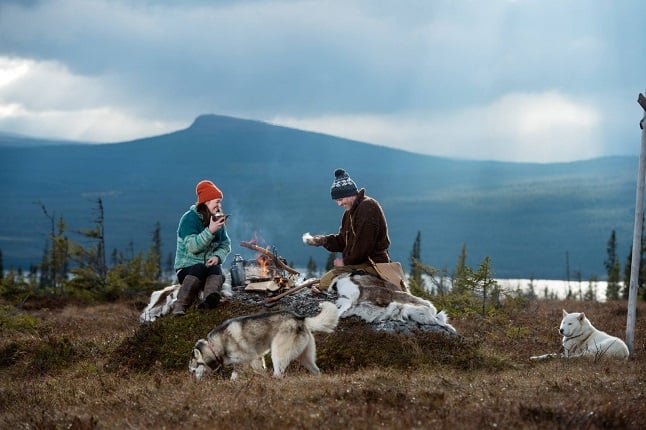 “By February this year we had actually doubled our income [from the previous year], we were doing really, really well,” she says.

“In January we had invested in another company, a business-to-business events and networking agency called Introbiz, with the aim of having a consistent income through the year since the dog-sledding is only six months of the year. And then coronavirus came in March.”

Spring for Claire and her husband Richard usually involves getting everything in order after the winter season, looking after their 80 dogs, fixing things up, and generally doing a spring clean while preparing for the next winter.

“Right now, I would normally have Christmas bookings and we'd be nearly full, with 20 to 30 bookings. This year we've had none, except for one or two who had tours booked last winter who said to keep the money and they'd come back next year – that sort of thing is really helpful for us to keep the wheel turning,” she says.

“We've had a couple of people pay for dog-sledding trips for next winter, and we've also launched 'sponsor a dog' which people have actually been asking for for a few years. If locals and tourists can invest small amounts of money in businesses now, it really helps us to keep it alive for the winter.”

The company, Wild Spirit, has been able to benefit from some of the government support, but Claire says she really had to be proactive in looking for it. She applied for deferred tax payments as well as 'adjustment support' available to small businesses, but says that not only was it hard to find information about the latter, it only applies to quite a narrow range of companies. Claire and her husband Richard with two of their many dogs. Photo: Private

“We were quite lucky because to get the support you had to have an income of over 250,000 kronor last year and have lost 30 percent of your business between March and April. We're in that bracket, but if you're a new business – even if you set up your business last April – you would quite likely get no help,” she says.

“When we moved, we were under the impression that the Swedish government wanted international businesses in Sweden, and there are a lot of us, so having the information available in many languages is important.”

Claire also hopes that her new networking business will help strengthen collaboration between small businesses. Introbiz has a focus on events such as breakfast meetings, activity-based and speaker events, which naturally have been put on hold due to the pandemic. But here she's also found opportunities in the crisis.

“There are no face-to-face events at the moment, we're doing lots of Zoom meetings and webinars, but it's actually been great to attract an audience across the whole of Sweden. Before, we couldn't even entertain that idea, and now we're going to keep the online webinars and membership,” she explains.

As well as businesses supporting each other, she notes that individuals can help by reaching out to the businesses they want to survive the crisis.

Small businesses may be too focused on adapting their offering or dealing with economic fallout from the crisis to do much marketing, but there are ways to show support from buying gift cards or paying for services in advance as some of her customers have done, to simply supporting them on social media.