How do you know if you're being charged a fair rent for an apartment, room or house in Sweden? Photo: Tomas Oneborg/SvD/TT
The Local
[email protected]
@thelocalsweden


Swedish law states that if you're renting a home, you must not be charged more than a "reasonable" rent, and yet a black market exists. There are several calculations you can do to make sure you're not being ripped off.

This only applies if you’re sub-letting an apartment, room or house from someone else, called renting i andrahand or ‘secondhand’ in Swedish. Renting directly from the building owner or housing agency, with a so-called förstahandskontrakt (first-hand contract) means rent controls often apply, but so does a queue system which often means you have to wait years to get one of these contracts in the bigger cities.

If you sub-let, you’ll either be renting from someone who has their own first-hand contract (this is called hyresrätt), or from someone who owns the property (called bostadsrätt if it’s an apartment or house belong to a housing association).

The rules are slightly different in both situations. It’s easiest to calculate a fair rent for a hyresrätt apartment, because your landlord pays rent themselves. They can charge you more than the exact amount they pay in rent, but only enough to cover extra fees or services included in the rent (such as internet, TV, and electricity) as well as a surcharge if you’re renting the apartment furnished.

It’s not set out in law how much extra they can charge for a furnished apartment, but around 10-15 percent is generally seen as reasonable. Note that that’s for a fully furnished home, in other words a property where the tenant can live without bringing any extra furniture. 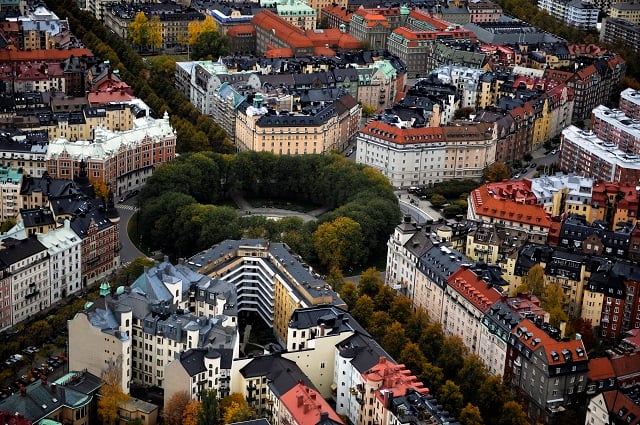 Homes in desirable areas of large cities can often be sublet at a high price. Photo: Bertil Ericson/SCANPIX

It’s more complicated for a bostadsrätt apartment or any other privately-owned home.

Instead, the calculation is made based on the market value calculated at a monthly rate, which might be worked out based on recently sold similar properties. Then, four percent is usually added on to cover the “cost of capital”.

On top of that, you’ll be charged for monthly costs. That includes things like internet, TV, and electricity, but also the monthly fee paid to the bostadsrättsförening (housing association) if the property belongs to one — this is the case for most apartments and some houses. And once again, if the property is being rented out furnished, the landlord is allowed to add 10-15 percent to cover this.

Some companies that manage sublet apartments have tools for calculating out reasonable rent based on the property’s size, location, and monthly costs, for example Samtrygg and Qasa. These services are both aimed at landlords, and an alternative is Boupplysning’s calculator, although only available in Swedish.

And what if you’re not going to be using the whole property, but just part of it?

If you’re renting out part of the apartment or house as an inneboende or one of several tenants, you do the same calculations as above depending on what kind of property it is, and calculate the proportion of the total rent/market value plus cost of capital equivalent to the proportion of living space you can use. Then you add on the cost of any services or furniture in the same way as above.

Doing these calculations yourself should give you an idea of the figure you should be looking at, but your landlord should also be able to show you how they’ve calculated the rent. Don’t be afraid to ask for the breakdown of costs.

Most importantly, make sure that you sign a contract with your landlord which states the full rent amount including any deposit, and that you pay it to the bank account stated in the contract each month. Never hand over any money without first signing a contract, and never make any transfers not regulated by the contract or any payments in cash.