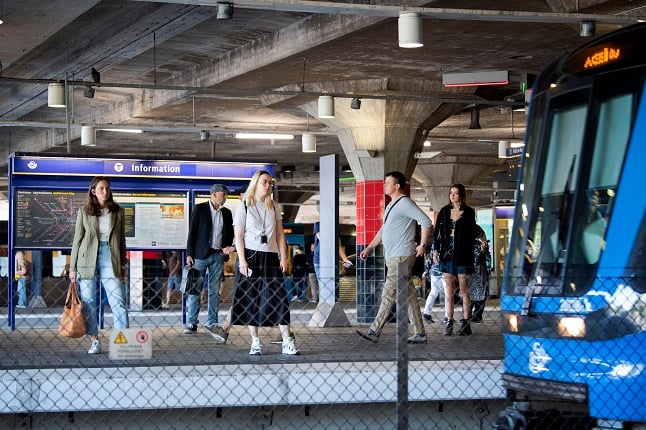 Passengers waiting for the subway in Stockholm in late August. Photo: Jessica Gow/TT

Through July and August, most days have seen between 250-400 new confirmed cases reported, and fewer than five deaths linked to the virus, a significant reduction on the numbers seen at the peak in April.

But in recent weeks there has been a slow yet clear upward trend in cases in those areas which had previously been less hard hit by the virus, such as Skåne.

Tourist areas such as Gotland and the West Coast of Sweden have also seen sharp rises in infections, while across the country younger people have made up a growing proportion of confirmed cases.

And the change in seasons brings a new set of worries, from cooler weather to the need for test-and-trace systems as people continue to adapt to life in a pandemic.

1. Back to work and school

Sweden's cities typically empty out during the month of July, with many taking four weeks or more off work, often spent at rural summer houses. Long vacations have probably been a factor in the fall in cases, experts have told The Local, so what happens now?

“International studies have shown that most of the transmission of this disease takes place either in the home or in the workplace,” state epidemiologist Anders Tegnell told The Local at Tuesday's press conference.

“We are telling people to work from home as much as possible, we are telling workplaces how important it is to be able to keep distance, try not to have lunch at the same time and those kinds of things.”

Everyone in Sweden has been advised to keep working from home if possible until the end of 2020, though it is up to employers to decide on the best solution for them. If 100 percent home-working is not practical, measures such as staggered workdays, rearranging furniture to allow distancing, and rota systems to avoid too many colleagues meeting in person have all been suggested. Universities and schools for over-16s can open their doors to students again after online learning in spring. Distance learning has been encouraged to reduce the number of situations with large numbers of people and to ease pressure on public transport, with many universities offering a mix of on-campus and online teaching.

Even with these measures, the autumn is likely to mean an increase of people in city centres and on trains and buses, as well as university students moving around the country. Schools for younger children have been open in Sweden throughout the pandemic, and authorities have said that students and school staff haven't been affected to a greater degree than the rest of the population based on the data available — but that still means more people will be out and about including on the school run.

Social distancing during the Swedish summer is one thing, when many people spend the months in remote summer cabins and naturally limit their social contacts, and those who do meet up have the option to do so outdoors, taking advantage of long days and warm temperatures.

With the days getting shorter and cooler, that will not be an option forever, although cities like Stockholm have extended the season for outdoor restaurant terraces to allow people to meet in the open air as long as possible.

The group who face particularly problems are the over-70s and members of risk groups, who have been advised to limit social contacts as much as possible and socialise at a distance outdoors instead. Visits to care homes, too, have mostly taken place outdoors.

“I think what's mainly going to be a challenge is how we're going to arrange visiting possibilities in elderly care homes, we have to think very deeply and clearly about that and how to do that in a safe way,” Tegnell said.

“I'm sure it will be possible but I think it will take some preparation and adaptation.” Sweden's 50-person limit on public events will remain in place throughout autumn, but the government has announced plans for exceptions. This means events like concerts and sports matches with a seated audience may soon be allowed to take place on a larger scale, as long as social distancing and other infection prevention measures are maintained.

And what about smaller gatherings, such as friends or family meeting at home?

Alongside the workplace, Tegnell named personal households as one of the riskiest environments for the autumn, but told The Local “the home is difficult to do very much about”.

In the UK, for example, gatherings within homes of members of more than two households are currently prohibited, but Tegnell said Sweden was not planning to issue any further guidelines on safe indoor socialising.

Testing in Sweden is well below the rate of neighbouring countries, with around 50,000 tests for active infections carried out in recent weeks. Part of the reason is a decline in cases, but widespread testing and tracing are crucial to keep on top of any new outbreaks.

Tegnell told The Local: “We are also going back to a strategy which more and more emphasises the need for contact tracing. This will be another way to break transmission chains.” However, the Public Health Agency has been criticised for its contact tracing, and in particular the responsibility often being placed on the infected person to inform their contacts. Sweden does not have a contact-tracing app as seen in countries like Germany, and there are no national recommendations for businesses like restaurants to record visitors' contact details for tracing purposes.

“When the spread of infection has now come down to low levels, there is reason to test suspicious cases to a greater extent and to contact trace around people who have been tested positive,” researcher Tom Britton wrote in an opinion piece for Dagens Nyheter.

Another option for Sweden is to focus on local or regional measures when a cluster is identified. This happened in Gällivare, northern Sweden, following an outbreak earlier in summer, with municipal bus routes paused and many cultural venues closed.

Sweden is increasingly a global outlier in the choice not to recommend face mask use by the general public in any situation, particularly now that both Norway and Denmark have introduced mask-wearing requirements.

The Public Health Agency has said it will look into whether, and in which circumstances, masks could be a helpful complement to other measures.

This could be extra important as the autumn weather means more people needing to use public transport and spend time indoors.

And it's something that more and more scientists in Sweden have called for, based on growing evidence from around the world.

“Since we can anticipate increased crowding during the autumn in areas such as transport and shops, but also when measures on physical distancing and crowds are eased, it is reasonable to now recommend the use of face masks in situations with a lot of people, especially indoors,” wrote Tom Britton.

One of the agency's main arguments against requiring mask-wearing has been that people may use them incorrectly or relax on other crucial measures.

If Sweden does start requiring the protective coverings, it will need to accompany new guidelines with clear information campaigns, which may be particularly challenging after months of authorities saying masks do not fit into the Swedish strategy.