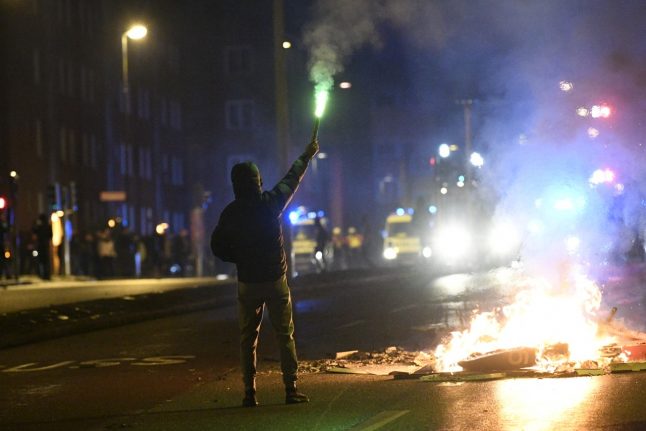 A protestor holds a flare on Malmö's Amiralsgatan street. Photo: TT
The disorderly phalanx of young men and teenagers, many wearing face masks and hooded tops, starts to accelerate, excitement-rising, as it nears the row of police vans blocking off the troubled Malmö suburb of Rosengård.
“We're gonna fuck this system up because they want to let a man burn the Koran,” one of them yells as the group starts propelling jagged chunks of concrete and metal road barriers at the heavily armoured police. “We're gonna fuck the whole system up and we're gonna fuck the police.”
The ostensible reason for the riot is the video released earlier on Friday, showing a group of Danish far-right activists from Rasmus Paludan's Hard Line party burning a copy of the Koran in a nearby park.
But many seemed more incensed by photos they believed showed police providing a protective ring to other activists who kicked a koran around the city's main square, using it like a football. Rioters holding street furniture, and the road covered with stones thrown at police. Photo: TT
For at least an hour, a young man dressed up in religious clothing circulates between the police and the rioters, begging the rioters to stop, telling them that they are shaming their religion.
Among the spectators, it's clear that many, perhaps most, of the Muslims among them oppose the riot.
“I don't like this they're fucking things up for our community here in Sweden because one Danish man burnt a Koran,” complains one man, who grew up in Malmö to Lebanese parents. “And this is what he wants. They want us to be like this. I've never seen this ever in my life. I'm shocked.”
Another young man, blocked from returning to his home in Rosengård at the end of a 10-hour shift, struggles to contain his frustration.
“This is just stupid, nothing good can come from this.” He points out at the stone-throwers. “If there's maybe 300-400 there, a maximum of five of them are Muslim. You know why? Because a real Muslim doesn't do this. All religions, not only Islam, are about peace, not this. This is only for idiots.”
During pauses in the riot, police try to encourage the spectators to go home, taking brief moments to build public confidence.
“I want to tell you that we are not happy, what you've done is protect an idiot,” one man told a policeman, pointing to a picture on his phone of police protecting anti-Islamic activists.
“The police did not give them permission to do anything,” the officer responded to the small crowd gathered around him. “We arrested him as soon as a film came out on the internet showing that they had burnt a Koran, and we arrested several of them.”
The policeman regretted that people were trying to “destroy our fine city.”
“You should know that we think you should be able to express yourselves, that's totally OK. But not like they're doing it.” An armoured riot van blocking Malmö's Amiralsgatan street. Photo:
Police held their position at the crossroad marking the dividing line between the troubled district of Rosengård and central Malmö, pushing the rioters back with a series of sudden charges. But they seemed to be minimising confrontation, rarely if ever using the gas sprays they are clasping.
The police charges only serve to increase the excitement among the rioters.
“Look at them, they can't fight back fire with fire, that doesn't work!” a young man, who calls himself 'the Somali pirate of Rosengård', hoots in a strong North-London accent.
“I'm a Muslim and they're violating our civil rights by letting other people burn the Koran that we believe in and now we have to show that they can't do that. It's against us, so we're against them. That's how simple it is.” Police sheltering from a barrage of stones behind their vans and riot vans. Photo: TT
The apartments here are at the dividing line between Rosengård, where most residents have an immigrant background, and Sorgenfri, where the population is more mixed.
Amar Mohsen, whose mother is Russian and whose father is Iraqi, says he fears the consequences of the Koran-burning and the reaction to it.
“The politicians in Sweden say: 'It's a human right. Do what you want. You live in a free country. You can burn a Koran in front of mosque. It's not like that. It will affect many people. And I don't think we will come back as normal, I think we will be more divided.”