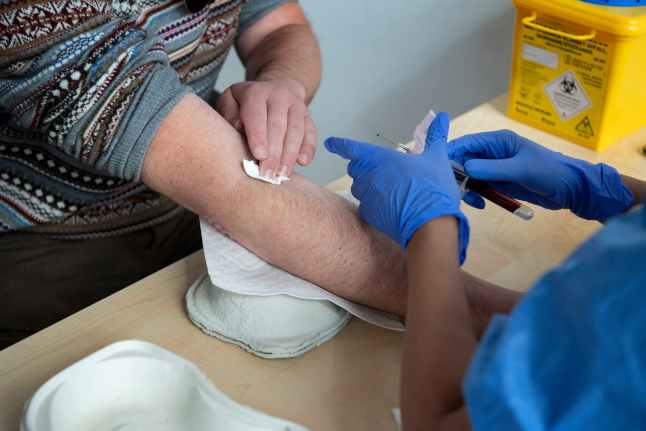 File photo of a person being tested for coronavirus in Stockholm. Photo: Jessica Gow/TT

In the Swedish capital, 250 of 14,000 people tested last week were infected with the virus, a positive rate of 1.8 percent.

Per Follin, department head at Stockholm's Communicable Disease Control and Prevention, said it was the “lowest level in a very long time.”

“We can't really compare now and then” because widespread testing didn't get under way in Sweden until June, “but you could say since week 10 or 11, possibly even earlier,” Follin told AFP in an email.

Before June, Stockholm tested only serious cases admitted to hospital.

The number of Covid-19 patients in intensive care is also currently low, with six patients in Stockholm hospitals as of August 31st compared to 225 at the end of April, the local health authority Region Stockholm said.

“The reason we have relatively low transmission now is largely due to the fact that so many Stockholmers are following the recommendations to stay home when you're sick, wash hands and keep your distance,” Follin said in a statement.

Sweden made headlines earlier this year with a high-profile refusal to lock down, instead insisting on social distancing and hygiene recommendations.

It has also refused to recommend the use of face masks, but has said their use may be advised in future.

As of Thursday, Sweden had the world's ninth-highest death toll at 576.28 per million inhabitants, according to Our World in Data, mainly due to its failure to protect the elderly in nursing homes in the early stages of the pandemic.

But Sweden's data has been pointing in the right direction for a while.

Its daily death toll peaked in April and is now down to a couple of deaths a day, while the number of cases have been in steady decline since early June, and its R-number has largely held below 1 since early July.

Public health agency officials have said they don't expect to see a large virus resurgence in Sweden, where schools reopened in mid-August, but that there is a risk of cluster outbreaks.