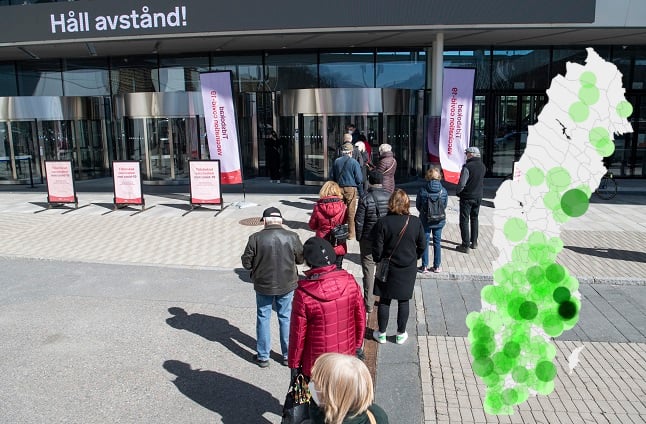 How many cases have been reported?

This graph shows how the number of daily reported cases has changed. The second graph shows the figures for the capital region of Stockholm only.

Note that there are delays in how Swedish regions report their figures, especially over the weekends, which is a big part of the reason for the dips in the cases reported each week.

How many people have died?

The graph below is based on Public Health Agency data, which includes deaths where the person had tested positive for Covid-19 in the previous 30 days, although some deaths reported by clinicians may have occurred later than 30 days. A few deaths may be removed if the cause of death is known to be wholly unrelated to Covid-19, but this is a very small number of cases, the agency told The Local.

There is a lag in reporting which means data is usually not complete for approximately two weeks after the date.

This is not the only way to track coronavirus-related deaths; the National Board of Health and Welfare tracks deaths where the cause of death was listed by a doctor as the coronavirus regardless of whether the person had been diagnosed, and it is also possible to look at excess mortality for a general idea of how the virus has impacted society.

How many tests are being done?

This shows how many people were tested for an ongoing coronavirus infection in Sweden each week. It is useful to compare with the number of cases to get an idea of whether increased or decreased tests could be a factor behind any changes. Note that Sweden has changed the criteria for being able to take a test over the course of the pandemic. During the first wave, only people requiring hospital or medical care were tested. It has only recently been the case that symptom-free people returning from overseas travel or who have had contact with an infected person have been routinely offered testing.

This shows the percentage of tests carried out which came back positive, and can be a useful indicator of how significant the spread of the virus in society is.

Note that this graph currently only shows data for the period from July 5th onwards, compared to the previous graphs which show data starting in the spring.

Where is the coronavirus spreading in Sweden?

These maps show that the virus is still spreading in almost all parts of the country, but to varying extents. Please note that the shade is based on the range, so the lighter coloured regions do not mean the spread of coronavirus is ‘low’, just that it is low compared to the rest of Sweden.

The map below shows all municipalities where more than 40 cases per 10,000 residents were reported in the most recent week with available data.

Which regions of Sweden have stricter local coronavirus recommendations?

National recommendations apply everywhere in Sweden. Currently, these include a call to limit socialising to those you live with or a few friends, and to keep distance from people in public. But the regions marked on the map below have stricter recommendations in place, which vary between regions but typically include a requirement to wear a face mask at all times on public transport and in other indoor environments where close contact can’t be avoided.

How many vaccines against Covid-19 have been carried out in Sweden?

The chart below shows the proportion of the adult population that have been given first and second doses of the Covid-19 vaccine in Sweden, based on Public Health Agency data. This data is updated weekly from regional reports, so it doesn’t include vaccinations given during the current week.

Most of the Covid-19 vaccines including all those currently approved for use in Sweden require two doses, several weeks apart, but may start offering some level of protection against serious illness from the first dose.