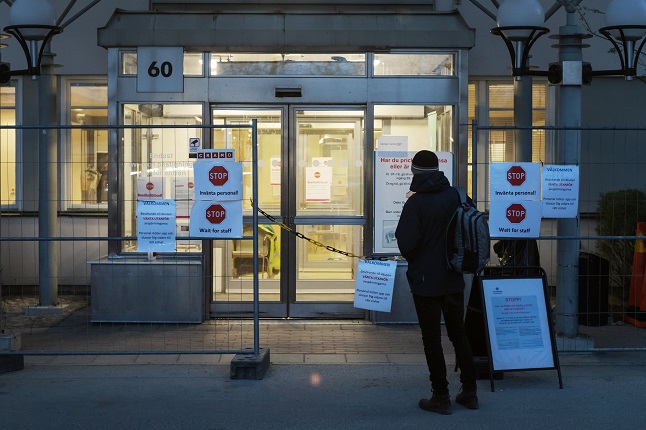 Over the past week, 303 new cases were reported in the Uppsala region, up from 132 the previous week. This makes it the region with the fastest spread of the virus in Sweden.

“We can see a general spread of Covid-19 in all age groups,” said regional healthcare director Mikael Köhler.

He pointed out that although there had not yet been an increase in deaths linked to the virus, this was likely if it continues to spread at a high rate in the population and reaches vulnerable groups – the elderly and those with multiple illnesses.

The temporary stop on non-essential treatments at the Uppsala University Hospital was introduced on Tuesday after two separate departments at the hospital reported clusters of the virus among staff, but planned care had resumed by the following day. No patients were reported to have been infected and none of the staff members were seriously ill with the virus.

At a press conference on Wednesday, the region's infectious disease doctor Johan Nöjd said that “it cannot be stressed enough” how important individual choices are in determining the course of the pandemic.

“For better or worse, it is very much the individual that has an impact. You can have wider societal measures, buses can traffic more routes, in theory you can close pubs and restaurants, at workplaces you can mark where people can sit, but in some ways everything falls apart if the individuals later in the evening still have social events, go to parties, sit with their bandy or hockey team in a crowded bus and socialise intensely;” he commented.

The closure of restaurants had been raised previously by councillor Malin Sjöberg Högrell, who said that the signs in the region were “pointing in the wrong direction”, adding that “this is very worrying”.

She said that meetings had been underway between the region's infectious disease doctor and the Public Health Agency to discuss whether local restrictions should be introduced to curb the spread of the virus.

“It is possible that restaurants will be required to close at 11pm. But no one knows if that will stop the spread or if it will just lead to parties at home,” wrote Sjöberg Högrell in a Facebook post.

Unlike other countries, Sweden never ordered restaurants or shops to close as part of a lockdown to limit the disease's spread, but there are measures in place at restaurants including one-metre distancing between tables.

The Public Health Agency has said that any future measures will likely be introduced regionally in response to local outbreaks. The agency's general director Johan Carlson has said that these measures could include limits on the size of groups that may meet, or recommendations not to go to the shops except for food.

Student parties have been named as a possible cause of clusters of the virus, after many young people returned to university and in some cases face-to-face teaching in September.

But councillor Sjöberg Högrell warned that blame cannot be placed entirely on any one demographic.

“The increase of Covid-19 is most prominent for those between 20-29 years of age but the increase can be seen in all age groups. So even if people blame student parties, that is not the only reason that the virus continues to spread. We have a broad transmission of the virus in all age groups,” she stated.

“The danger is far from over. The pandemic is far from over. Protect each other and take care of one another. It is the choices that you and I make today that determine the load on our healthcare system in two to three weeks.”

She added that infections were also increasing in elderly care homes, with confirmed cases at three such facilities and contact tracing under way.

There are 25 people in the Uppsala region currently receiving hospital care for Covid-19, including three in intensive care.