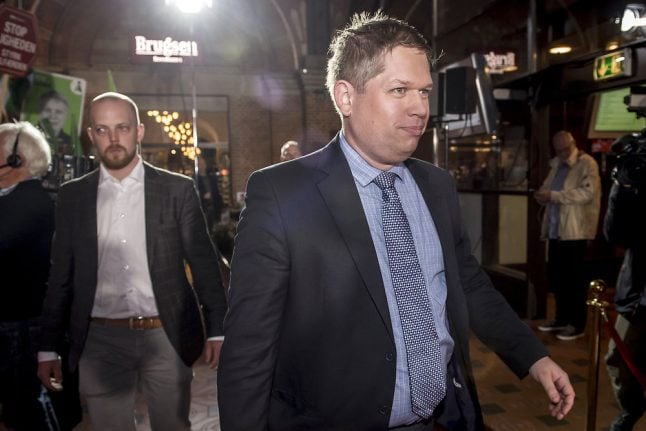 The leader of the Stram Kurs (Hard Line) party, who has a criminal conviction in Denmark for inciting racial hatred, was previously banned from entering Sweden for two years. But that ban would be rendered invalid by his now-confirmed Swedish citizenship.

Paludan came to prominence in Denmark through his anti-Islam demonstrations in areas with sizeable minority ethnic communities. The main feature of the demonstrations is burning and desecration of the Quran.

Muslims believe the Quran to be the direct word of God and intentionally destroying one is therefore seen as an extremely sacrilegious act.

Far-right activist Paludan espouses vehemently anti-Islam rhetoric and wants to ban Islam in Denmark — in breach of the constitution — and deport swathes of non-ethnic Danes from the country.

In August, a group of activists linked to the Stram Kurs party posted a video of themselves burning a copy of the Quran in Malmö.

Around a dozen rioters were subsequently arrested, as were as a number of people involved in far-right rally where a Quran was kicked around on the ground on the city’s Stortorget square. Six people at Stortorget were seized by police on suspicion of agitation against ethnic groups.

Police had earlier stopped Paludan himself on the border and banned him from entering Sweden for two years on the basis that there was a risk he would break the law while the country.

But Swedish immigration authority Migrationsverket has now recognised he is in fact a citizen of the country due to the nationality of one of his parents, Danish newswire Ritzau reports. That would enable him to freely enter Sweden.

“I hope that we can carry out activities in Sweden later this year,” Paludan told Ritzau.

“It was not difficult to become a Swedish citizen due to the fact that I haven’t done anything at all. I apparently became one when my parents married in 1989,” he said.

Swedish newspaper Sydsvenskan has also confirmed the report, publishing a copy of the Migrationsverket confirmation on its website.

It should be noted that the Swedish immigration agency has confirmed that Paludan was already a citizen of the country, not granted him citizenship.

He took the opportunity to make a discriminatory remark in comments given to Ritzau.

Paludan has claimed that Swedish immigration policy is a threat to Denmark and therefore justifies his activism in the country. He also argued that by demonstrating in Sweden, he will persuade Danish voters to elect his party.

“We think more Danes will vote for us when they see it,” he said.

He told Ritzau that he would sue Sweden for having previously denied him entry, given he was a citizen of the country when it happened.

“The Swedish government breached the constitution,” he said.

“That is very serious. Maybe we’ll burn a couple of hundred Qurans as a response to this serious assault on my integrity,” he added.