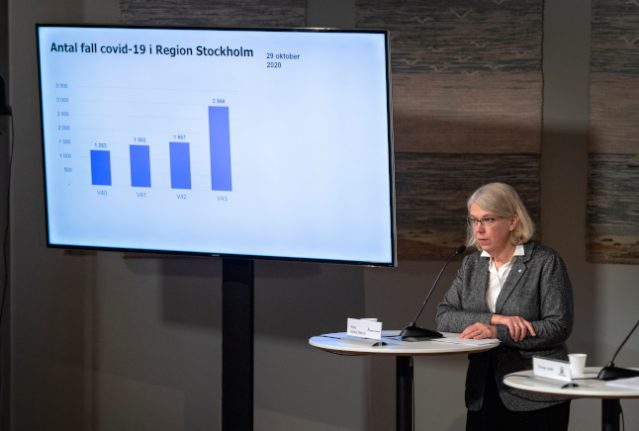 The three regions on Thursday followed Uppsala and Skåne in introducing stricter coronavirus measures, following an increase in Covid-19 patients in hospital and elderly care, as well as a rise in positive tests.

According to the new guidelines, which are outlined on the Public Health Agency's website and are effective immediately, everyone in Stockholm, Västra Götaland and Östergötland are strongly urged to:

With these additions, that means five of Sweden's 21 regions are currently subject to stricter restrictions, which are not legally binding, so there are no fines for violating them, but are at the same time not considered optional.

The new local measures also include tighter rules for workplaces in Stockholm, Västra Götaland and Östergötland, as well as other venues such as shopping centres and sports centres, stating that they should take measures to make sure everyone is able to follow the guidelines, for example by limiting the number of visitors.

Workplaces are also required to help ensure that employees can follow the recommendations, for example by making sure staff can work from home, and postponing business trips, conferences or other in-person meetings.

The Local attended the press conference digitally, and asked state epidemiologist Anders Tegnell about the importance of working from home. Many of our readers have reported being required to go into the workplace even when they can carry out their roles from home, and during the press conference workplaces were named as a key source of new infections.

“It's very important to work from home when you can and the work permits [this], and both of them need to be in place. It's very difficult to say that anyone is doing anything wrong with this,” he replied.

“But in the local advice we're now issuing, it's very clear that we are asking both employers and employees to do their best to make it possible to work from home as much as possible.”

The Local also asked for clarity on the new local recommendations to avoid socialising with people from a different household.

“I think the main thing here is to understand what's behind this. What we need to do is to minimise our social contacts and especially new social contacts, and that's what it's all about. You really need to avoid meeting people you don't meet normally,” he said.

A total of 121,167 people have tested positive for coronavirus in Sweden to date. That's an increase from 117,913 according to yesterday's report, and while the number of Covid-19 patients in hospital and intensive care is still at a relatively low level compared to the peak of the outbreak in spring, that figure is also clearly rising.

This is the number of Covid-19 patients in intensive care in Sweden since the start of the pandemic. Still low levels compared to spring, but clearly increasing, and expected to keep increasing unless we get the number of new infections down. pic.twitter.com/ZYefe2i17q

With additional reporting by Catherine Edwards