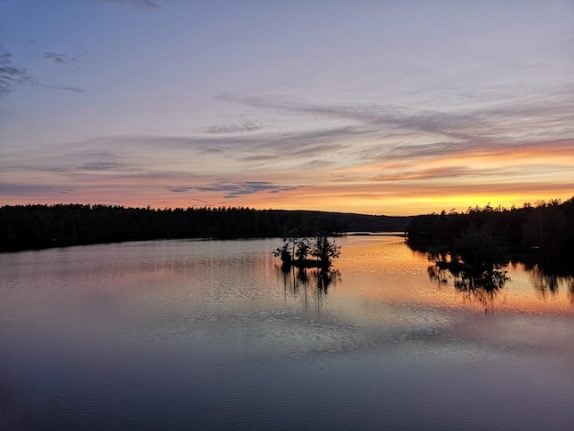 Silence — there's not a lot of it around.

Noise seems to be a surreptitious side-effect of development. Air traffic, accelerating cars, sirens, a buzzing refrigerator, a humming AC, clamorous neighbours: our lives are continuously accompanied by a dissonant melody.

Noise pollution is a little known form of environmental impairment and represents, according to the WHO, an underestimated risk to public health. In addition to hearing damage and tinnitus, an excess of disquiet can be linked to cardiovascular diseases, depression, insomnia, aggression and anxiety disorders. The European Environment Agency estimates that every year some 12,000 Europeans die prematurely as a result of excessive noise.

All the same; most people tend to avoid silence like the plague.

Clatter that is forced upon us is annoying, but we we suppress unasked-for sounds with a background radio, endless TV babble or a Spotify playlist lending a soundtrack to day-to-day activities. A telephone rings, pings and vibrates in our pocket. A sudden gap in a conversation must instantaneously be filled; we prefer exchanging hollow phrases over the unease of a quiet get-together.

This is on my mind after months of living through the coronavirus: a constant commotion, but simultaneously isolating. In June, right before Midsummer, I travelled to the West Swedish region of Dalsland. On the edge of woodland and water, at lake Iväg, stands a little glass house, a so-called 72 hour glass cabin, run by the outdoors activity centre Dalslands Aktiviteter.

A stay at the cabin is an exercise in silence. The first five of these glass structures were erected as part of a research project about the relationship between nature and the reduction of stress levels. A number of city dwellers with notoriously stressful jobs, including a German police officer, a French taxi driver and a British reporter, briefly traded their hectic lives to spend three days alone in the Swedish wilderness. Each of them resided in their own, desolate glass cabin, without electricity, without neighbours and far from civilization.

Stress researchers found that the subjects' stress levels decreased by 70 percent. Their blood pressure and heart rate dropped, while their well-being and creativity increased.

These results don’t seem limited to a stay in a 72-hour glass cabin. Spend three — or two, or five, or eighteen — days alone with a tent in nature and I dare to promise that you leave the woods considerably calmer then you had entered them some days before.

The cabins live up to all stereotypes of Scandinavian design — simple but modern, built from only natural materials, stylish — and are set in picturesque landscapes; on a cliff, by a lake, bordering a pine forest.

Full disclosure; there’s another glass hut not far from mine and the activity centre is only a kilometre away. But still, from my position there’s no other human or human-made structure in sight.

An additional advantage of staying here is that all practicalities will be taken care of. The bed is made and all meals are delivered in the vicinity of the cabin. Three days without work, obligations, household chores or expectations. Three days without electricity and hot water, without kitchen and bathroom (yet with a compost toilet). Three days without phone, music, or news.

Initially there is the excitement of arrival; I inspect my cabin, try out the bed, visit the compost toilet, discover two fishing rods at the back of the hut, climb down the rocks towards the lake a dive into the cool water. I ramble through the woods.

Another two hours until dinner. Okay, let’s find my book. It’s evening. I’ve finished reading, there’s no longer a meal to look forward to and I am far from tired. I involuntarily keep checking my watch, as if I’m expecting someone or something to show up. As if I’m waiting for the moment my life resumes it course.

But also, this is life.

It’s only then that a first glimpse of silence shows itself. Lying in bed I look out over the lake. The trees on the shores are mirrored in the water, as is the sky, that gradually changes from a bright blue to a white blue, later to yellow, orange and purple. I can feel the wind die down until the surface of Iväg is smooth as ice.

My concept of silence needs reinterpretation. The silence here tonight is overwhelming, no doubt about that. The animals, the trees, the water: they all give the impression of having gone to rest. I hear no traffic, no neighbours. Even airplanes are nowhere to be heard in these coronavirus times.

Nevertheless there is no lack of sound: the shuffling around my nest continues. From time to time I hear the splash of a pike breaking through the lake’s surface. I hear the flapping of wings, I hear my own breath, I hear a woodpecker in the distance — but none of these sounds seem to interrupt the silence. Is silence an inner experience, I wonder, rather than some external reality?

Sleeping under a glass roof without curtains and with Midsummer approaching ins no mean feat. The sky still has a twilight tinge well after midnight. Besides, I feel vulnerable: everyone can see me lying here, is the thought that keeps flashing through my head. Although, of course, there is no one here to look.

Despite me having abandoned time I find stability in structuring my days. Swimming becomes a three times daily ritual. Breakfast, lunch and dinner become moments to look forward to. Evenings are for roaming and a visit to the wood-fired sauna, a few hundred meters from the hut.

During the time between my newfound routines I spend hours staring at the sky and the changing cloud formations. At the water, which turns out to be as volatile as the weather. In the morning the lake is still and the clouds float in duplicate above and below the horizon. Later during the day, when the wind picks up and the blue sky hides behind a cloudy blanket, Iväg turns dark, inscrutable, its ripples breaking against the rocky banks. In these conditions I reluctantly dip into the water. Still, I do so no matter what, knowing that I will feel better afterwards.

The lake becomes a way out of my mind. In the mornings I feel sharp-witted and in good spirits, but just after lunch, when my energy level drops, the endless fretting starts. About all that could have been and all that no longer is.

It is the silence that facilitates this rumination; in my daily existence this inner voice is easily drowned out. There are plenty of ways to avoid hearing it, and I’ve practiced all of them at one time or another: obsessive working, exercising, podcast listening, film noir binging, news reading, smartphone staring, drinking, smoking.

But right now I have none of the above options. Somehow I have to call a truce with silence. With that which is: here, now. And then there is the lake: not as a flight from, but as a gateway to that silence. The immersion in the cold water helps me to gently shift my focus from the mental to the physical, from mind to body. I float on Iväg, staring at the sky. Only my toes and face are above surface. My hearing becomes muffled and the already sparse sounds reach me delayed. I let myself be carried by the water.

It's not that I am fleeing from my thoughts; they simply no longer seem relevant and appear to slowly drift away. For an instant, the boundary between me and my surroundings fades, and the silence is no longer frightening but sublime.