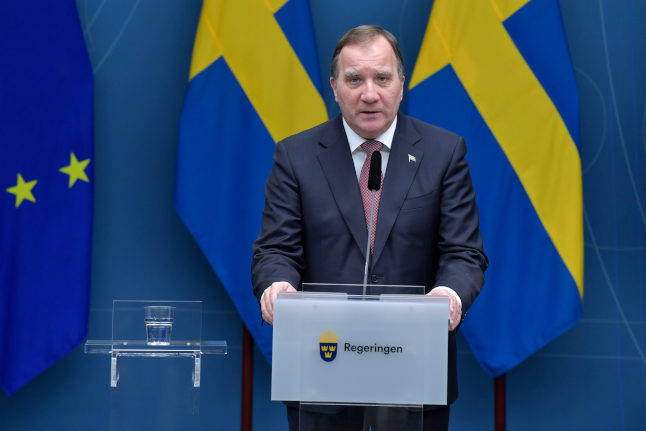 Sweden will also lower the limit for groups at restaurants to four people per group, and will ban alcohol sales from 8pm, said Löfven. A cap on the number of people in shops, shopping centres and gyms will also be rolled out, with shops responsible for setting their own maximum limit on how many customers are allowed in the shop.

“If that does not have the planned effect, the government will also plan to close those businesses,” said Löfven.

Schools for over-16s will also continue online classes beyond Christmas, until January 24th. And all non-essential public services run by the state, municipalities and regions will close with immediate effect, and will remain closed until January 24th – this includes for example swimming pools, sports centres and museums, said Löfven.

All employers are also urged to let non-essential staff work from home until January 24th.

Not all measures will come into force immediately. The ban on post-8pm alcohol sales at bars and restaurants (currently banned after 10pm) and limit on groups to four (currently eight) is to apply from December 24th.

The new guidelines for face masks will be presented by the Public Health Agency before many people return to work after the Christmas break on January 7th, its director-general Carlson said. They will specify among other things which face masks to use and at what times they should be used, and will be a recommendation only.

Sweden has for months been one of few countries affected by a second wave of the coronavirus that has not recommended wearing face masks outside of healthcare settings, despite the WHO advising the use of face masks as a complementary measure in situations where it is not possible to keep physical distance to others.

The Public Health Agency has argued that although masks can work in preventing infection, for example in the case of a local outbreak, there is a lack of conclusive scientific proof that it can stem an outbreak on a wider scale, arguing that it might make people comply less with other guidelines such as social distancing.

When The Local asked readers (international residents in Sweden) last month about coronavirus measures that they would like to see in Sweden, well over half of the respondents (152 readers) said they would appreciate mask-wearing being either mandated or recommended. The Local asked the Public Health Agency's Carlson at the press conference on Friday whether or not he understood that some people who have been calling for face masks might be angry that it has taken Sweden months to come round to making this recommendation.

“I'm not quite sure you're right there because for logical reasons, which the WHO points out, we need to find areas where face masks make a difference. In the latest update in the WHO guidelines it's very thoroughly stated that it's in situations where short distance can't be avoided. It's not a general recommendation to use face masks outdoors and indoors,” said Carlson.

“We looked at that very thoroughly and said these are the situations. Because in other situations it could hamper our efforts to contain the disease, because face masks will replace social distancing. And I think this has been a very common phenomenon out in the world… if you look at North America for example, where a lot of focus has been on face masks, very little focus has been on big gatherings of people there. Whether they're wearing face masks or not is not the big thing; big gatherings are the problem. So we're trying to focus very thoroughly on what's important.”

A total of 367,120 people have tested positive for coronavirus in Sweden to date, and 7,993 have died, many of whom lived in elderly care homes. An inquiry into Sweden's coronavirus response found that although the government and its predecessors were ultimately responsible for the failure, the number of structural problems in elderly care and fragmented levels of government in Sweden was in itself a big part of the problem.

Asked by The Local whether anyone would be held accountable and forced to resign as a result, like for example in Denmark where the minister in charge recently stepped down over the government's criticised response to the country's coronavirus mink scandal, Löfven called it a “very speculative question”.

He said that the high number of casulaties was “nothing that you want to see”, but added that the inquiry had found that in elderly care “the responsibility is not so easy to exactly point at one person 'you are responsible'”.

He added that he had “full confidence” in all his ministers. “Then if any party in the parliament want to question the trust in the government, it's up to them,” said Löfven.

You can watch the press conference (in Swedish) below. The Local's questions (in English) come at around 49 minutes in: