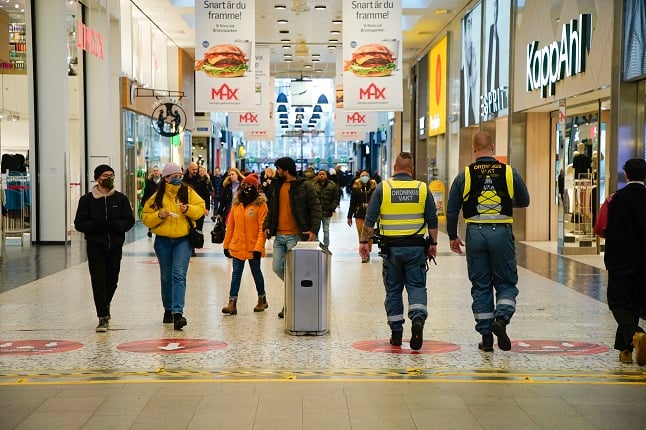 Which coronavirus measures do you have to follow by law in Sweden, and what happens if you don't? Photo: Adam Ihse/TT

What can you be fined for under Sweden's pandemic law?

Sweden's new pandemic law gives the government power to introduce extra measures to curb the spread of the coronavirus, and if you break these, you could face fines or other legal sanctions.

As of January 19th, the measures introduced under the law mostly applied to businesses rather than individuals. For example, shops, gyms and sports facilities are limited to a maximum of one person per ten square metres of usable space (not shelves or cash registers), and these limits must be stated in risk assessments and advertised on signs at every entrance, and stated in mandatory risk assessments.

Venues found to violate these rules may be handed fines by local authorities. Individuals won't be fined if they enter a shop with too many people, but are expected to be aware of the limits and avoid indoor environments with a risk of crowding.

Individuals could face fines if the government introduces certain other measures under the pandemic law. For example, this law gives the government power to limit the number of people who can gather in public places like parks and beaches. It hasn't used this possibility yet, but if it does, individuals who gather in larger numbers could face sanctions.

Are there other coronavirus laws you could be fined for violating?

As well as the pandemic law, you could be fined if you break other laws which relate to the pandemic, including Sweden's Public Order Act or Communicable Diseases Act.

Under the Public Order Act, you could be fined if you organise an event for more than eight people.

Under the Communicable Diseases Act, you could face fines or even jail time if you are found to have infected others with the coronavirus either knowingly or through negligence; the same applies to other socially dangerous diseases such as HIV. You could also face investigation if you do not get tested for the coronavirus even after being repeatedly called for a test, for example via contact tracing.

What are the sanctions?

The Swedish Prosecution Authority has proposed a fixed fine of 2,000 kronor ($240) for any violations of the new pandemic law, including the measures introduced so far and any which are introduced in the future. This fine would be issued by police on the spot, and could be issued to teenagers aged over 15 (the age of legal responsibility in Sweden) as well as adults. This proposal is currently set to come into force on January 27th.

People who organise gatherings of more than eight people in violation of the Public Order Act could face fines or even imprisonment of up to six months. Police also have the power to shut down such gatherings.

Under the Communicable Diseases Act, you could be convicted of assault if you deliberately infect someone else with Covid-19. Fines and jail sentences are also possible if you expose someone to illness through negligence,. This is in practice rare, but in Örebro for example a carer was prosecuted for going to work despite waiting for a Covid-19 test result, which was positive when it came.

Which measures are not legally enforced?

The recommendations (allmänna råd) from Sweden's Public Health Agency are not laws, and there are currently no sanctions for individuals who violate them.

These recommendations include: limit socialising to a small circle of close family and friends; keep a distance from others in public places; work from home if you are able to; stay at home and avoid close contact with others if you have symptoms; avoid non-necessary travel; avoid unnecessary trips to shops and other indoor environments.

These measures do have a basis in law. The Communicable Diseases Act requires everyone in Sweden to “take reasonable precautions to curb the spread of infectious diseases”. The recommendations from the Public Health Agency are a way of telling the public which reasonable precautions you should take, but the recommendations leave room for adaptation to individual circumstances.

Sweden's Public Health Agency recommends wearing a face mask on public transport between the hours 7-9 am and 4-6 pm on weekdays. This is not legally binding, with no sanctions for those violating the recommendation.

Where can I find out more?

EXPLAINED: What you need to know about Sweden's pandemic law (The Local)

KrisInformation (information from Swedish authorities in a range of languages)