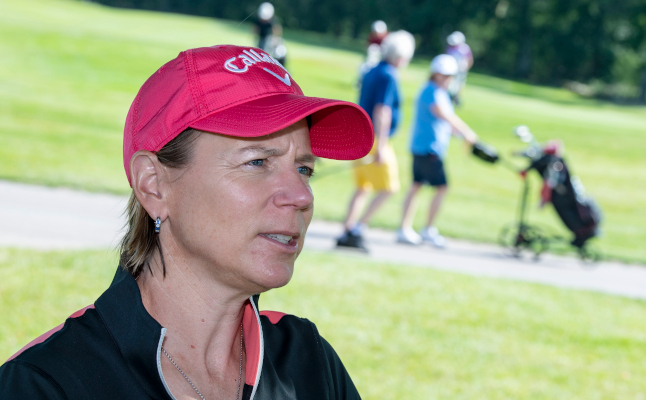 Annika Sörenstam at a golf course in Sweden in 2019. Photo: Johan Nilsson/TT

The 50-year-old Swedish star won 10 major titles and 72 events overall during an epic LPGA career that ended in 2008 and plays this week as a celebrity in the LPGA season-opening Tournament of Champions in Florida.

In interviews with The Golf Channel and Golfweek, Sörenstam said she had no regrets about receiving the award from Trump on January 7th, a day after he spoke to protesters who became an insurrection force by breaking into the US Capitol in what she told Golf Channel was “a dark day in American history.”

“Looking back, I don't second-guess. I like to look forward, not spend energy on what could have been,” Sörenstam said. “It's all about opening doors. That's one thing I've learned.

“I've heard from a lot of people – you can imagine, a lot of opinions, a lot of comments. I hear clearly what those people say. I know they see it differently. But I listen and I embrace them all.”

Hours after the nightmarish scene in which five people died, Sörenstam and South African legend Gary Player accepted the award and Babe Didrikson Zaharias was honoured posthumously in a White House ceremony with golf-fan Trump that was closed to the media.

“Listen, I share the sadness and the fear with everyone, what happened at the Capitol, but I'm not one to look back,” Sörenstam told Golfweek.

New England Patriots coach Bill Belichick declined to accept the award last week due to the US Capitol invasion.

Sörenstam said she was following through on her commitment to accept the award, the nation's highest civilian honour, after it was first announced last March. The ceremony was postponed due to the Covid-19 pandemic.

“It was supposed to be in March 2020, and looking back at it, it's just really about the people who have received it through history,” Sörenstam told Golf Channel.

“I don't want to spend any energy looking back, I like to spend energy looking forward, continue to open doors, create opportunities for the young girls around the world.”

Sörenstam, president of the International Golf Federation, is the only woman to shoot 59 in an LPGA event. She said she understands her critics but intends to move on.

“You can imagine the range of emotions and comments,” Sörenstam told Golfweek. “I hear clearly those who see it differently.”