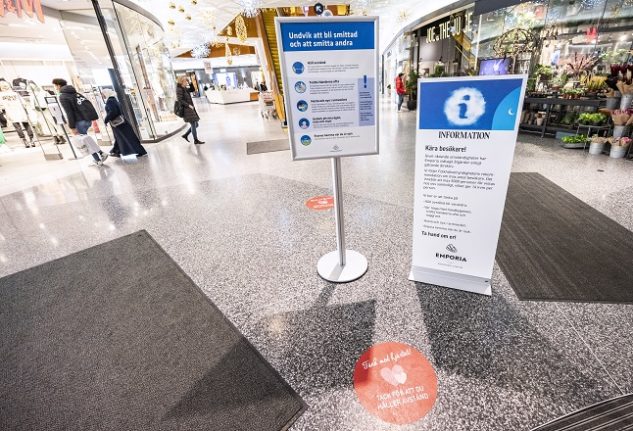 Signs remind customers to keep their distance in a Malmö shopping centre, which could be shut down under new coronavirus proposals. Photo: Johan Nilsson/TT

“It is worrying that the number of cases has risen, we are observing the development with concern […] there is a tangible risk of a third wave of infection,” warned Health and Social Affairs Minister Lena Hallengren, who presented the measures with Culture Minister Amanda Lind on Wednesday morning.

“It may be the case that parts of the Swedish society are shut down.”

These measures come under the framework of the pandemic law which was rushed through parliament in January. They have been sent out for consultation today, which means relevant authorities have the chance to give input on the feasibility of the proposals until February 26th, and they are likely to come into force on March 11th.

The new proposals include the possibility to close down more businesses, with Hallengren saying that closing shops and shopping centres alone – as was made possible by the pandemic law – may not be enough to curb the virus if the spread continues to rise.

The proposal would make “a broader shutdown of the Swedish society” possible, including closure of the following businesses:

This doesn't mean this will automatically happen on March 11th, but the government will have the power to implement the measure from that date.

The pandemic law gives the government power to implement measures to curb the spread of the virus, but in itself doesn't contain any measures. Using the new law, the government has already limited the maximum number of people allowed in shops and gyms.

Municipalities would be able to limit entry to public places where there is a risk of crowding, including outdoor places.

Hallengren said this would become more relevant in warmer months, when people gather at Sweden's parks, lakes and beaches.

People breaking this rule would face fines of 2,000 kronor.

A new framework would cover theme parks and amusement parks, which are currently mostly closed under the rules limiting public events, as well as zoos, which have mostly been allowed to stay open.

Any events that take place within these venues, such as shows or performances, would still be covered by the national limit on public events, currently a maximum of eight people.

Museums and galleries would need to follow the same rules that currently apply to gyms and shops; limiting the number of people to no more than one per ten square metres of usable space.

Culture Minister Amanda Lind said that with these new rules in place, it is likely that the museums currently closed, including all Sweden's state-run museums, should be able to open again. She also said that many privately run cultural venues have already adapted to follow the limits on visitor numbers that apply to shops, but the new proposal would regulate this by law.

The government also announced a new framework for managing visitor numbers at different kinds of public events, meaning that different limits would apply to the following kinds of events, based on the risk of infection:

Events with designated seating would be allowed more people per event than other indoor events, something which was already possible through a change to the events law passed in October but which never truly came into effect because of a rise in the spread of infection.

Public events were first limited to a maximum of 500 people in mid-March 2020, before this was reduced to 50 later that month and to eight in December 2020. The limit has been the same for all public events, meaning that for example concerts, sports matches and outdoor races are currently subject to the same limit.