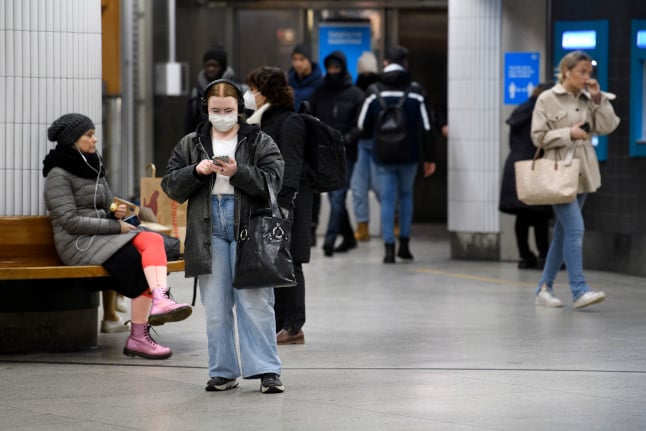 Stockholm’s regional infectious disease doctor Maria Rotzén Östlund announced the new measures, which are effective immediately, at a press conference at 12.30pm, where she warned of a rise in the spread of infection.

Deliveries of vaccine have also been slowing down due to a series of supply issues, so Rotzén Östlund said new regional health and safety recommendations were needed in Stockholm to help avoid a serious third wave.

The new recommendations include using face masks on public transport at all times, not just during rush hour, as well as in situations where close contact can’t be avoided, for example in the workplace, hairdressing salons, pharmacies or the supermarket.

“We need to increase the use of face masks a lot,” said Rotzén Östlund. “Put it on before you go into the shop,” she said, because you don’t know whether or not you’ll end up in a situation where you can’t keep a distance.

The winter sports school break will get under way in Stockholm next week, and the measures are being rolled out to minimise the impact of a feared increase in travelling and social contacts, in violation of the recommendations.

Rotzén Östlund told people not to travel unless they have to, but also issued guidelines for those who choose not to cancel any planned holidays. These include: Only travel if everyone in the group is completely free of symptoms; if someone develops symptoms at your destination, isolate everyone in the group and have a contingency plan that will allow you to travel home safely and get tested; keep a two-metre distance to other people, even outside; bring hand disinfectant and face masks; avoid social contacts outside your household; avoid shopping at the destination, instead do your shopping at home and bring everything you need with you.

She also said that lower and upper secondary schools were recommended to move to full-time distance teaching the week after the break, with exceptions only for students with special needs or practical modules and exams.

Stockholm is the latest region to roll out regional recommendations, following Västergötland, Västerbotten and Gävleborg. These come on top of the national restrictions and guidelines which remain in place, including to keep a physical distance to other people, avoid social contacts beyond your bubble, work from home and avoid public transport unless you have no other choice. If you develop symptoms, it is particularly important to isolate.

The Sörmland region, south of Stockholm, also announced new regional guidelines on Tuesday. These include face masks at all times of the day on public transport and in indoor environments where it is hard to keep a distance (except school classrooms), and distance teaching next week and the week after that.

You can watch the press conference in Swedish here:

Coronavirus in Sweden: How many cases are there in your neighbourhood?