Every year, Sweden's foreign minister makes a 'foreign policy declaration', or utrikesdeklaration, to parliament, spelling out the foreign ministry's view of the current global situation and laying out Sweden's priorities.

What did Foreign Minister Ann Linde have to say about Sweden's neighbours?

She said: “Nordic cooperation is important but has been sorely tested during the Covid-19 pandemic.”

This is the latest in a series of diplomatic rebukes from Sweden to Norway and Denmark, first over their decision to impose border controls on Sweden in March, and then over their refusal to remove controls until the level of infection in Sweden, and later in individual Swedish regions, fell below a certain level.

At the same time, she singled out Finland as the country where Sweden's military cooperation needed to be tightest.

Linde hailed the trade agreement reached between the EU and the UK at the end of December as providing “the foundation for an important future partnership”, but she said the government hoped for closer links.

She said that Sweden intended to “deepen Sweden's and the EU's relationship with the UK, even in foreign and security policy”.

What was the latest message on the prospect of membership of the Nato alliance?

“Sweden will not remain passive if a catastrophe or attack hit another EU or Nordic country, and we expect these countries to act in the same way if Sweden is affected. We should therefore be able to give and take support, both civil and military.”

But she reiterated Sweden's neutrality, and said the government was not interested in joining Nato.

“Our military non-alignment serves us well and contributes to stability and security in northern Europe,” she said.

But she said the country would continue with its “active, broad and responsible” security politics, which would include “deepened defence cooperation, in particular with Finland”.

What are Sweden's plans for its year chairing the OCSE?

Sweden is this year chairing the Organization for Security and Co-operation in Europe, which was originally set up to build cooperation between Western Europe and the Soviet bloc.

She said that Sweden would seek to improve the security situation in the bloc, and increase the emphasis on human rights, democracy and the rule of law, and would also prioritise women, peace and security. 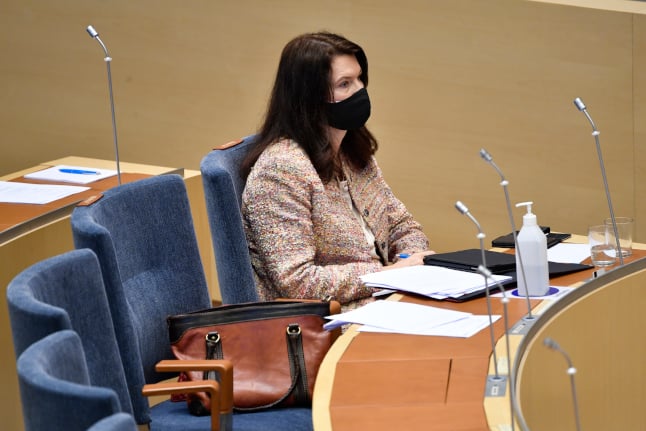 Which countries did Linde have the toughest messages for?

The declaration's toughest words were directed at Russia and Belarus, with more diplomatically expressed criticisms also made towards the human rights failings of China and Turkey.

“Russia's aggression against Ukraine, and the illegal annexation of Crimea is unacceptable. These crimes under international law undermine European security and are the motivation for continuing sanctions against Russia,” she said.

She also said that Sweden viewed the “negative trend” for human rights and civil society in Russia with “great concern”, saying that the country condemned both “crimes against international rights and poisoning attacks”, a clear reference to the poisoning of regime critic Alexei Navalny.

As for Belarus, Linde said that the “rigged election and the brutal abuse” that the country's government had carried out was “unacceptable”, saying that this explained the sanctions currently in place.

When it came to China, she said that the country's “international significance” meant that it concerned Sweden's national interest “to an ever greater extent”.

At the same time, she said she viewed the “shrinking democratic space in Hong Kong” with “especially great concern”.

“The freedoms and human rights of Hongkongers must be respected,” she said.

She recognised Turkey's “central role for the EU”, but said Sweden would support “democratic forces” in Turkey, and be “outspoken in our criticism of crimes against human rights”.

Linde reaffirmed the country's commitment to the feminist foreign policy launched by her predecessor Margot Wallström, saying it was “more important than in a long time”, pointing out that Sweden was leading a global coalition for economic equality, and would make women's rights an important theme in its chairmanship of the OCSE.

What about the environment?

With the US rejoining the Paris Agreement, and the United Nations Climate Change Conference in November, there was relatively little on the environment.