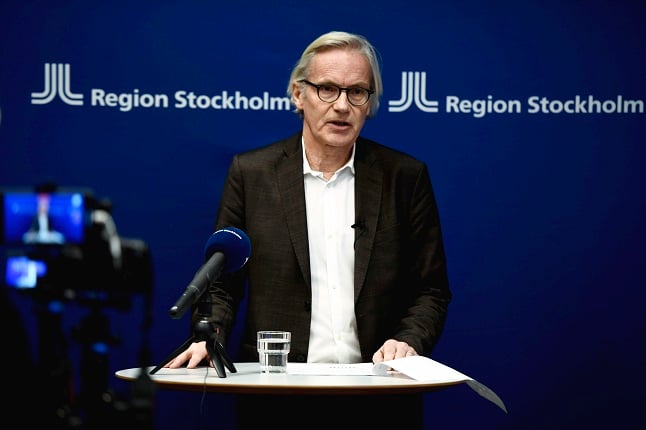 A total of 318 patients were being treated in Stockholm’s hospitals for Covid-19 on Wednesday, 48 of them in intensive care units – an increase from 29 less than two weeks previously.

“We have a third wave of infection and it’s here now,” the acting head of healthcare Johan Bratt said at a press conference.

For three weeks in a row, the number of new cases has risen by around 25 percent. Last week a total of 6,336 new cases of Covid-19 were reported, up from 3,225 new cases three weeks earlier.

“The more contacts we have, the more people are infected. The absolute most important thing you can do now is, all the time, to avoid all forms of crowding and continue keeping distance in all environments,” Bratt said.

“It is not OK to go against the guidelines and recommendations. Those who do so are not only risking their life and health, but that of everyone they meet. Every deviation from the recommendations brings with it an increased risk of spreading the infection, of an increased need for healthcare, and increased mortality.”

Bratt also commented on the rate of vaccination in Stockholm, which has so far vaccinated the lowest proportion of its adult residents out of Sweden’s 21 regions.

“The lack of vaccine is the main thing that limits the pace of vaccination in the region,” he said. “It is not reasonable that concerned residents cannot be told when they will get the vaccine.”

He said that starting next week, the region would send out information on how older Stockholmers can receive the vaccination, with over-80s being called for the jab first, and everyone included in this age group set to receive a letter over the next two weeks.

People aged 70-79 are currently expected to be offered their vaccination from March 29th onwards, but this depends on the vaccine deliveries going according to plan, Bratt said. He added that he hoped to be able to share information for 65-69-year-olds and other prioritised groups soon, but that this was not yet possible.

The letters would include information in Swedish and English, as well as a summary in eight further languages.