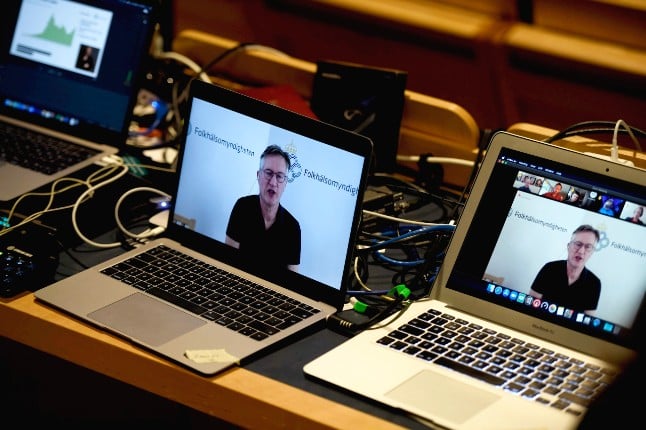 At the Public Health Agency’s bi-weekly press conference, Tegnell said that his agency was currently coordinating with Sweden’s regional governments to identify organisations within civil society which could be used to reach the public in new ways.

“It’s about motivating people again,” Tegnell said. “We need to get out into the local civil society and we have a lot of dialogue with regional governments now on how we can use different organisations to reach people and stress how important it is to keep our distance a little bit more.”

Asked by The Local if falling adherence signalled a failure in Sweden’s strategy of imposingly low level, sustainable recommendations, Anders Tegnell said that the approach had worked for a long time.

“It has served us well for more than a year, which I think is a success in itself,” he said. “Of course, it needs constant reminders.”

He said that what most worried him were reports that more and more people were returning to work in their offices and that people seemed to be socialising with wider groups of people.

“What we’re hearing when we talk to the regions is that people are starting to meet each other more, not just close family, but also more distant relatives, and some people seem to be going back to their workplaces,” he said. “I would say that those are probably the two areas which are most worrying because that’s where the big numbers of new cases take place.”

On Tuesday, 28 new deaths were reported, adding to the evidence that the steady fall in the number of deaths seen since vaccination began around Christmas was now coming to an end.

Last week saw the biggest rise in weekly cases this year, and there have been 686 new cases registered per 100,000 over the past fortnight.

There are 305 people being treated in intensive care, a 9 percent increase on last week. When can Sweden open up again?

Asked by The Local whether Sweden might follow the line set by Denmark’s prime minister, and open up society when all those over the age of 50 had been vaccinated, Tegnell said he felt that approach was too simplistic.

“Of course, this is a nice vision to have everybody above a certain age vaccinated, but that will never happen,” he said. “We’ve reached more than 90 percent of the people living in long-term care facilities.

“That’s a fantastic success, but that means that we still have 10 percent of the people that are susceptible. And I think that will be true everywhere. A fair amount of people above 50 will always be susceptible, which means that you really would like to have a low spread of the disease, not just a high coverage before you start going back to a more normal.”

Sweden, he said, will instead base its reopening plans on how widespread infection is in society.

What is happening with the AstraZeneca jab?

Tegnell said that Stockholm had begun giving vaccinating people with the AstraZeneca jab already on Friday, a day after the Public Health Agency ruled that the vaccine could be used for those over the age of 65.

Many other regions had already begun vaccinating people with AstraZeneca on Monday and Tuesday with all expected to do so this week.

What about Easter celebrations?

Tegnell was asked about the Swedish Easter tradition of påskkärring, or Easter witches, which sees children go door-to-door dressed as witches, collecting chocolate. He said that even though children are not as serious an infection risk as adults, they can still transmit the virus, meaning the tradition, which involves meeting a considerable number of strangers, should not take place.