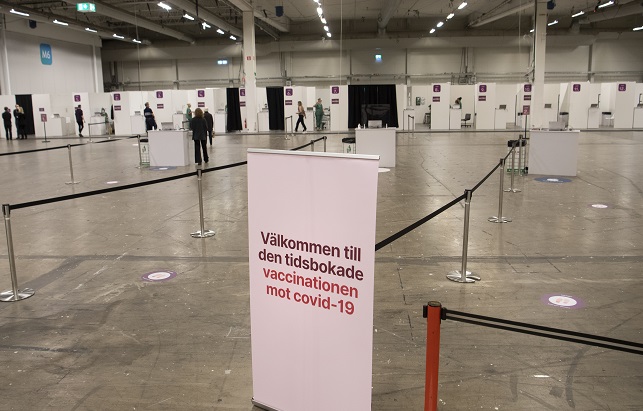 Vaccinations get underway at a conference centre north of Stockholm. Photo: Fredrik Sandberg/TT

Sweden’s spring budget is being presented to parliament today, including 45 billion kronor intended to “take Sweden out of the crisis”, which covers extended support for businesses and cash for other Covid-19 measures. Some of the plans have already been announced by the government, including 1.7 billion kronor for vaccine costs, 2 billion kronor to fund the cost of healthcare that was postponed due to Covid-19, and 1.65 billion kronor for large-scale testing and contact tracing.

The government has also announced funding for public transport, and vocational programmes combined with language lessons for new arrivals. We will have more details on The Local later today.

What’s going on with Covid-19 vaccinations in Sweden?

The Swedish Public Health Agency has paused the use of the Johnson & Johnson (Janssen) Covid-19 vaccine before it began being rolled out in Sweden. This comes after the company itself said it would delay its European rollout due to concerns over rare potential side effects detected in the United States.

We’ve got an update on where the vaccination programme is up to in all of Sweden’s 21 regions. Most have begun what’s called Phase 2 by offering the vaccine to over-65s as well as people on dialysis or recent transplant recipients, but in five regions the cut-off age is still 70. One of them is Stockholm, where every other available timeslot for vaccination is currently unbooked, so if you know someone aged over 70 in Stockholm, make sure they know they are eligible.

Two regions, Kalmar and Halland, are opening booking to over-60s this week.

Region Värmland tells residents: Assume everyone you meet is infected

A week after Uppsala warned residents to go into a “personal lockdown”, another region, Värmland, is warning people they need to do more to cut down social contacts and “assume that everyone you meet is infected”, and behave as if you yourself are infected.

This wording is stronger than that used by authorities throughout by the pandemic, but the recommendations are still largely the same between all regions: only socialise with people you live with (or a few others within your close circle, for example if you live alone), keep a distance from other people indoors and outdoors, and limit use of public transport and shops as much as possible. Some regions are also asking residents to avoid all non-essential travel, and to wear face masks at all times on public transport and in public indoor environments.

Because these recommendations rely on high levels of compliance, some regions are now sharpening the tone used in public health communications.

ICU staff ‘on their knees’ as cases rise

More than a year after the coronavirus first started spreading widely in Sweden, and with ICU admissions for the virus higher than at any point during the second wave, many Swedish hospital staff are worn out.

“We gave everything, but we have been working at maximum capacity for a year now,” one ICU worker in Gothenburg told Dagens Nyheter.

Matilda Eriksson, who is the workplace environment representative, said more and more staff were being signed off for sick leave, and that there were also more reports of staff planning to resign in order to take a break.

Starting on April 15th, the Swedish Public Employment Service is offering a new so-called ‘intensive year’ for new arrivals, where a combination of professional training and language lessons is intended to get them into the job market within a year.

To begin with, it won’t be possible to apply for the programme, with authorities instead selecting around 1,500 participants.

Sweden could make it illegal to deny the Holocaust

Sweden’s government wants to make it illegal to deny that the Holocaust, as is the case in 16 other countries in Europe and several more worldwide, the Justice Minister told Swedish radio.

“I want to have a law where it clearly states that the Holocaust happened, and that propaganda [denying this] can be prosecuted as agitation against an ethnic group,” minister Morgan Johansson said. He said there were three reasons for such a law: growing far-right extremism, the ease of spreading false propaganda through social media, and the fact that few people who lived through the Holocaust are still living.

But it will take time for such a law to be passed, and the first step is putting together a parliamentary committee to look into the question.