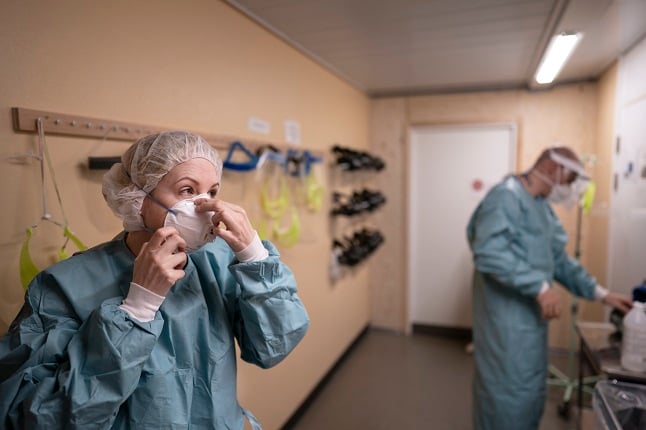 At Thursday’s press conference, the National Board of Health and Welfare said that nationwide there were 386 Covid-19 patients being treated in intensive care wards, the same level as the peak of the second wave. At the same time, higher pressure on intensive care wards from people with other illnesses means that the total number of patients in ICUs is close to the level during spring 2020.

As of Friday, one of three regions had a so-called “crisis deal” activated, which means some staff may need to work shifts of up to 12 hours and makes it more possible for patients to be transferred to other regions due to full capacity. This is currently in place in Stockholm, Jönköping, Västerbotten, Uppsala, Gävleborg, and Dalarna, according to SKR, the umbrella organisation for Sweden’s regions and municipalities.

Both Stockholm and Örebro have over 170 percent occupancy in ICUs compared to normal levels, with ten of Sweden’s 21 regions at more than 125 percent of normal capacity.

In Uppsala, where all residents have been urged to go into a “personal lockdown” to curb the spread of the third wave, healthcare chiefs have warned of the severity of the situation at a press briefing.

“There is more pressure on the healthcare sector now than there has been at any point [of the pandemic],” said Fredrik Sund, head of the infection clinic at Uppsala University Hospital.

“If this continues, there are not many more resources left,” he told Sweden’s public radio broadcaster. “We are beginning to come close to catastrophe.”

Among other measures, healthcare staff have been “loaned” from public and private doctor’s offices to help with Covid-19 care at Uppsala’s main hospital, for the third time during the pandemic.

It comes a week after the region announced it was postponing “more or less all planned care than is not vital”.

Planned healthcare has been postponed in several other regions in recent weeks, while regions are already dealing with a “healthcare debt” due to planned care that was postponed during previous waves of the pandemic. In the southern region of Blekinge, certain planned operations were postponed for at least two weeks on Thursday, to free up resources for intensive care wards.