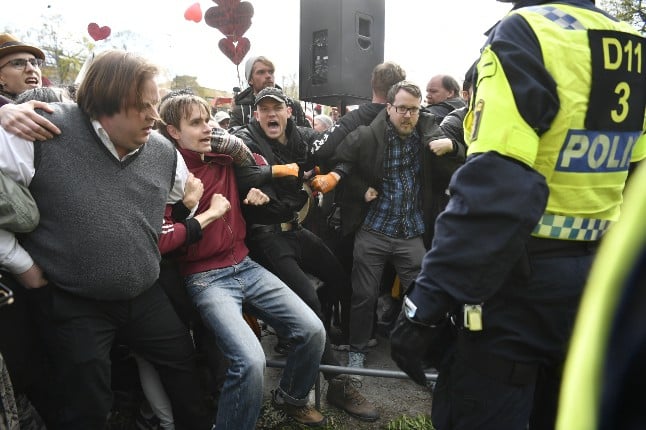 “We registered two cases of violent resistance, which happened as we removed two people from the demonstration,” Peter Ågren, the police officer who led the operation, told Sweden’s TT newswire.

One other person was seized for attacking a police vehicle – called blåljussabotage, or “blue light sabotage” in Swedish – and another was reported for assault.

The local Stockholm regional government had already issued the main organiser Fredrik Sjöström and three others with fines of 30,000 kronor each for arranging a public event for more than eight people.

Some 2,000 people signed up to take part in the protest, which was dubbed Första Majtåget för Frihet och Sanning, “The May 1st Protest for Freedom and Truth”.

Police ordered protesters to leave within six minutes of the protest beginning at the Norra Bantorget Square in central Stockholm.

“You are requested to leave the square voluntarily,” police shouted to the procession, but the protesters ignored them, drowning them out with chants of Vakna Sverige, or “Wake up Sweden”.

“This takes time and requires patience,” said Carina Skagerlind, a spokesperson for Stockholm police. “We are working with telling them to interrupt the protest, and if needed will remove them from the area. This work is going to take a while.”

When the procession reached the Odenplan square, they were stopped by a barricade of police cars, after which several demonstrators were taken away by officers.

“Carry on walking,” the protesters then chanted, making it past the barricade and continuing until they reached the Vasaparken park. Many carried signs with messages such as “the mass media is the virus”, “Covid-19 was planned”, or “the pandemic is invented”.

A woman, who called herself Helena, told TT that she believed Sweden’s relatively light coronavirus restrictions were a threat to democracy.

“I don’t believe in this pandemic,” she said. “Look how the police are behaving. There’s no longer democracy in our country.”

She said Covid-19 was “just an ordinary virus”, claimed that there was no excess mortality in Sweden, and argued that the virus was “just a way of frightening people”.

“We see people dying every day, people of all ages totally wrecked, and here they are going and claiming that the virus doesn’t exist and that we should open up Sweden,” he told TT. “It’s a real slap in the face.”

Speakers at Vasaparken argued that so-called vaccine passes were a form of “medical apartheid”, and called for Sweden’s pandemic law to be scrapped.

Unlike other European countries, Sweden opted for months not to impose strict measures on its population at the start of the pandemic, issuing guidance in the form of recommendations instead.

In November, however, facing a significant second wave of infections, Sweden capped public gatherings at eight participants and forced cafes, bars and restaurants to close at 8.30pm.