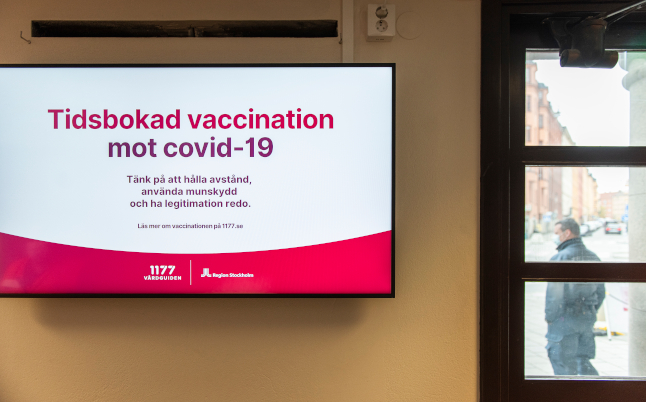 This information sign at a Covid vaccination hub in Stockholm reminds people who have booked an appointment to "keep a distance, wear a face mask and have your ID at hand". Photo: Gustaf Månsson/SvD/TT

The Swedish Public Health Agency has warned that fake emails are being sent out in its name. The emails are said to ask recipients to respond to a national health survey, and offer a reward for their participation – but no such official survey is being carried out at the moment.

The agency stressed that it was not the sender of these emails, and urged anyone who receives or has received one “not to open the email and not to click on any links”.

The rent cap proposal that could topple Sweden’s government

A controversial government inquiry into removing Sweden’s hotly debated rent cap on new builds is set to be released today, with the Left Party threatening to put forward a vote of no confidence in the government if it moves to make the proposal a reality.

The proposal is part of the so-called January Agreement between the ruling Social Democrat-Green government and the Centre and Liberal parties. According to its supporters (mainly on the right), it will help create more apartments and shorter housing queues. According to its critics (mainly on the left), who are worried it is the first step towards rolling out market rents for all apartments, it will lead to higher rents.

Covid-19 vaccinations are now open in Stockholm for everyone aged over 40, as well as people born in 1981 who have not yet had their birthday this year. If you’re eligible, you can read more about how to book your vaccine appointment in Stockholm HERE.

If you don’t live in Stockholm, you can check where the vaccine programme is up to and where to book a slot in your Swedish region in The Local’s full list HERE.

If you're struggling to book your Covid vaccine in Sweden without a personnummer, here's a reminder of the best steps to follow. https://t.co/BSC2CXxrTb

The city of Gothenburg will celebrate its 400th anniversary today, four centuries after King Gustav II Adolf founded the city on the west coast of Sweden, next to the Göta Älv river. The main celebrations have been postponed to 2023, due to the pandemic, but some festivities will take place today, including online with Crown Princess Victoria and local celebrities Tomas von Brömssen and Miriam Bryant.

At 16:21 on the dot, there’s going to be a gun salute, church bells will ring out, and ships and taxis will sound their horns. So if you live in Gothenburg, be prepared.