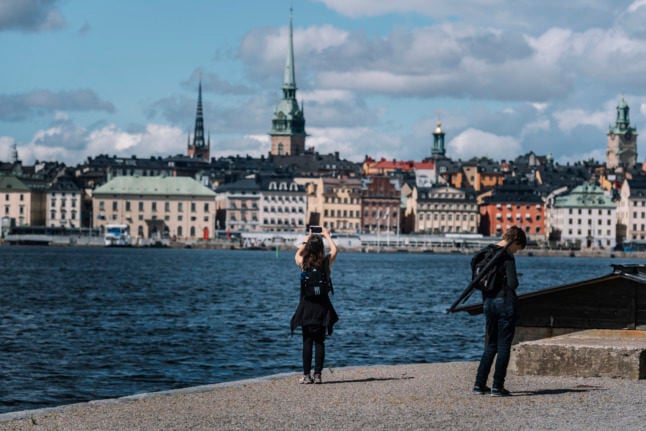 Unsurprisingly, tourist hot spots in Stockholm have been quieter since the pandemic. Photo: Stina Stjernkvist/TT

All right, they’re not technically a Stockholmer, but they’re so delighted they’ve been allowed to travel that we’re not going to take it away from them.

You’ll see far fewer tourists this year, due to travel bans and pandemic restrictions, but a determined few will join the seagulls and pigeons crowding the Kungsträdgården park.

They’ll be taking photos of themselves on Gamla Stan’s empty streets, or eating ice creams, amazed that there are no queues for Gröna Lund amusement park. When they’re home they’ll tell people about how quiet the city is and how weird it was not to have to wear a face mask all the time.

Armed with a suitcase full of textbooks and winter clothes, they’re ready for their new semester at Stockholm University, eager to make friends and learn about Swedish culture.

They decided to arrive a month before term starts to settle in, only to find cafes closed and not a person in sight, other than a few other international students in their residence. So they spend their days reading ahead in parks, and their nights at home video calling with family, waiting for something to happen. At least there’s more time to read up on course texts without any distracting people around. Photo: Cecilia Larsson Lantz/Image Bank Sweden

They only took this job because they needed it for school and were hoping it would give them some skills that look good on their very sparse CV. But no one is around in the office to teach them anything.

Now they’re stuck writing generic response emails to enquiries that come to the main company email address. All they’re learning is the best way to copy-paste from the FAQ section and how to keep busy with nothing but a coffee machine and some paper clips for company. You’ll find them walking through Nacka at 6am, half covered in glitter, exhausted but still buzzing. Sure, they could go to their parents’ summer house for a month but it would be boring, and they haven’t danced in a crowd for nearly a year.

They know that the best parties in Stockholm are during the summer and they spend all year looking forward to the open-air raves that crop up at secret spots in the forests dotted around the city. With pandemic restrictions still having an impact on concerts and music festivals, there are more parties than ever. And a heightened police presence at some illegal parties isn’t going to stop them from having an amazing time. For some, even a pandemic won’t stop the party. Photo: Rodrigo Rivas Ruiz/Image Bank Sweden

It’s a good day when they get to drive one of the air conditioned buses, and there aren’t too many tourists who come in proffering cash and asking for directions to Uppsala.

Shifts might be extra long because they’re covering for a colleague who is off on semester, but at least they don’t have to talk to anybody. More than anything, they’re looking forward to autumn when they’re flying off to Spain to lie on the beach and not step foot on a bus. Many public transport drivers don’t get the chance to take holidays over the summer. Photo: Erik Abel/TT

They arrived in Sweden to start their new life during the winter, and by now they’re feeling proud of how well they’ve adapted. The long nights of summer will be a well-deserved reward. Too late, they realise their error. Their new local friends have left town, they don’t quite know anyone well enough to be invited on a sommarstuga vacation, and they’re stuck at the office covering for everyone else, but unable to do much because every email is met with a cheery out of office reply. On the plus side, it’s the best time of year to have family or friends visiting and show off the city’s parks and beaches free from crowds. It’s only when the city clears out for the summer and you didn’t get the memo that you realise you might not have adapted to Sweden quite as much as you thought. Photo: Tove Freiij/imagebank.sweden.se

They’re only here for three days before they go on a yoga retreat after spending a few weeks at their brother’s summer house in the archipelago. During that time they need to see all of their friends and be seen at the right pop-up summer bars sporting a hefty tan, white trousers and Birkenstocks. When they’re not looking like they’re having the best time on Instagram they’ll be busy on their phone planning their next escape from the city. The Swedes who leave the city for the summer have a lot of catching up to do with friends. Photo: Simon Paulin/Image Bank Sweden