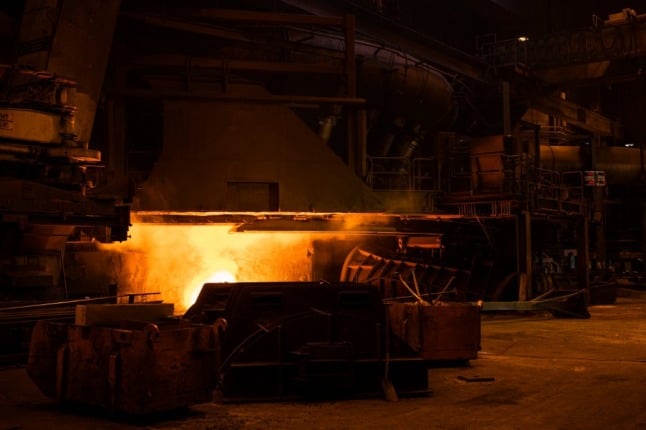 Liquid iron is tapped into a chute from the blast furnace at steelmaker SSAB in Luleå, northern Sweden. Photo: Jonathan Nackstrand/AFP

In a gleaming new building in the northern Swedish town of Luleå, steelmaker SSAB is using a new manufacturing method that could revolutionise the highly-polluting industry by eliminating nearly all its CO2 emissions.

But making the method work at scale poses major challenges and the technique may not be the silver bullet everyone is hoping for. Critics argue it may just push emissions elsewhere.

Finding ways to decarbonise steel, an indispensable component of modern industry, is one of the keys to drastically reducing carbon emissions to meet climate goals.

Among heavy industries, iron and steel production is the number one contributor to CO2 emissions, according to the International Energy Agency.

The World Steel Association estimates the industry accounts for about seven to nine percent of man-made emissions worldwide, with an estimated 2.6 billion tonnes of CO2 emitted in 2020.

In Luleå, the sterile appearance of the new building stands in stark contrast to the nearby soot-covered blast furnace it’s meant to replace.

Alight with the signature orange glow of melted metal as liquid iron spews out, the blast furnace is the main method for producing steel today.

“By switching technology from a normal blast furnace where we use coal and emit CO2, we end up with regular water instead,” SSAB site manager Monica Quinteiro tells AFP during a visit to the HYBRIT pilot facility.

“We can reduce the CO2 emissions from steelmaking by 90 percent,” she adds.

The iron ore that comes out of a mine is usually rich in oxides, chemical compounds made up of iron and oxygen, the most well-known form of which is rust. To make steel, that oxygen needs to be removed.

Air heated to more than 1,000C (1,832F) is fed into the blast furnace, causing coke to react with the oxygen which is then released as CO2, resulting in nearly two tonnes of CO2 for every tonne of steel produced.

In the HYBRIT facility, the oxygen is removed differently.

“Instead of using heated air, we are circulating hot hydrogen gas,” Quinteiro explains. The hydrogen, like the carbon in the coke, binds with the oxygen in the iron ore, instead creating water.

While so-called direct reduction of iron isn’t totally new, HYBRIT distinguishes itself by using hydrogen – produced from electrolysis – and ensuring that all of the electricity in the production process is from renewable sources.

While steel is made up of mostly iron, some carbon needs to be added.

“But that’s a very, very small amount that we need to add at the end of the manufacturing process,” Martin Pei, SSAB chief technical officer and HYBRIT project initiator, tells AFP.

If the successful pilot scheme can be scaled up, “We can in principle solve the root cause of the CO2 emissions,” Pei explains.

In August, SSAB shipped the first batch of steel plates – 25 tonnes – made with the new process – which it labels fossil-free – to truckmaker Volvo. The biggest hurdle to full-scale production is access to electricity, especially that produced from renewable sources. To operate at scale, SSAB would need an estimated 15 terawatt hours (TWh) of electricity a year, and for their mining operations LKAB needs 55 TWh.

Together that represents roughly a third of Sweden’s total electricity consumption.

Not everyone is a fan of the approach.

“It takes such massive amounts of electricity, at a time when electricity production is already strained,” Christian Sandström, an associate professor at the Jönköping International Business School, told AFP.

Sandström and two colleagues wrote a paper criticising the project in October and questioning the “fossil-free” label.

“The net effect of this hydrogen-based steel is a higher consumption of electricity and from what we can see there are no signs that electricity is going fossil-free,” Sandström said.

Scaling up SSAB’s production would hardly make a dent in emissions from steel globally: in terms of tonnage, SSAB only ranked 52 among global steel producers in 2020, according to the World Steel Association.

But others are betting this may be the future.

In February, the newly formed Swedish company H2 Green Steel announced plans to build a facility that would be operational in 2024.

And China’s HBIS, the world’s third-largest steel producer, in May announced it had started production on a demonstration facility for its own direct reduction of iron using hydrogen.

READER INSIGHTS
Seven steps: How to reduce your climate impact as an international resident
Url copied to clipboard!