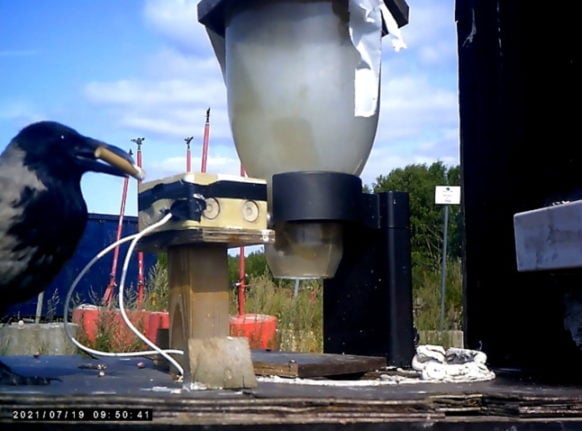 The wild crows can be trained through a step-by-step learning process. The birds can learn to pick up litter by placing it in to a machine which dispenses food.

The company chose to use crows as they are the most intelligent bird, Günther-Hanssen told TT.

“They are easier to teach and there is also a higher chance of them learning from each other. At the same time, there’s a lower risk of them mistakenly eating any rubbish,” he said.

Over a billion cigarette butts are left on Sweden’s streets each year, and they represent 62 percent of all litter, according to the Keep Sweden Tidy Foundation.

Now, the method is ready for large-scale testing. A potential pilot project is being investigated in Södertälje municipality, where crows will help pick up litter.

“It depends on whether we can find a place in Södertälje which will work with the food dispenser, and then if there are opportunities for financing,” Tomas Thernström, waste strategist at Södertälje municipality, told TT.

Similar schemes have been trialled in other countries in the past, such as this story from 2018 about crows helping to keep a French theme park clean and tidy.

Günther-Hanssen believes that the scheme could save the municipality at least 75% of costs involved with picking up cigarette butts, depending on how many the crows collect.

If the pilot project works in Södertälje municipality, the hope is that the results could end in a permanent solution which could be used in the rest of the country to complement current cleaning solutions.

If it’s possible, they would like to get going this spring, Thernström said.

“It would be interesting to see if this could work in other environments as well. Also from the perspective that we can teach crows to pick up cigarette butts but we can’t teach people not to throw them on the ground. That’s an interesting thought,” said Thernström.