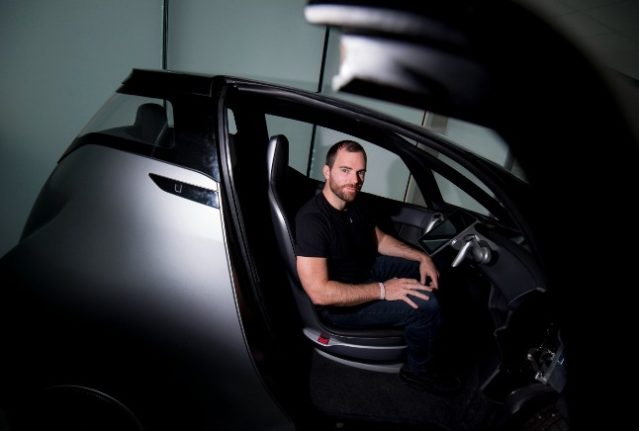 Uniti founder Lewis Horne inside the prototype for the Uniti One in 2017. The car was an empty shell. Photo: Johan Nilsson/TT

The Lund-based start-up launched in 2017 with a wave of hype, raising some €1.1m in a crowd-funding campaign, forming partnerships with blue-chip companies like Siemens, E.on, and the German industrial robot giant Kuka, and winning plaudits from top politicians such as Sweden’s then environment minister, Isabella Lovin.

“In Sweden, we are reinventing a piece of the world: the electric car,” the company’s charismatic Australian founder Lewis Horne gushed. “We have optimised the machine for its Achilles heel, which of course is the battery.”

The company claimed in 2017 to have developed an “innovation management system”, which had led to seven patent applications, with more on the way, and it quickly drew up plans to set up a fully automated factory in Landskrona.

The scale of the company’s ambitions generated enormous media coverage, and soon Horne was crossing the globe, speaking at forum after forum. Even The Local was swept up in the excitement, asking in our headline whether Uniti had just crowdfunded the car of the future.

But the factory in Landskrona never happened. Next, Horne began pledging that in 2020 Uniti would produce 300,000 cars at Silverstone in the UK. Two years later, not one functioning car has been produced.

Finally, last summer, the first of the company’s long-suffering investors got to test drive a functioning car, the UNITI Zero. It looked nothing like the futuristic UNITI One prototypes, which had been shown a few years earlier: no streamlined design, no glass roof with in-built solar panel. “Is this just a rebadged Chinese car?” asked one sceptical investor.

“It’s going to be a real Uniti,” Horne responded. “Of course, it is built on a platform. Volvo and Polestar are built in the same place by the same people. But we are providing the quality, design, software, and technical solutions.”

But according to the long investigation in Filter Magazine, it was a Zhidou D3, a low-cost Chinese electric vehicle that cannot even be legally taken on the roads in Sweden. All Uniti had done was spray it silver and change the design of the bumper.

In November, the car site Bytbil was leaked accounts showing that the company had -9.4m kronor in its “own capital” account, and that Sweden’s national debt collection agency was trying to recover 7m kronor in debt. It then reported a 17.5m kronor loss, after which its external auditor resigned, expressing doubts about the company’s viability.

A month later, on December 1st, Horne sent out a mail to shareholders saying that hoped-for investment by a major Chinese company was on the way but had been held up by new currency controls. He then asked for them to stump up a further 10m kronor so it could meet debts due on December 10th.

It wasn’t until January 4th, that the company put out a release saying no Chinese investment was now coming. A board meeting, it said, was planned for the next week.

Since then, there’s been silence. Horne, meanwhile, is residing on a sailing boat in the Caribbean after a four-month
sailing trip from Sweden.

Several former executives at the company told Filter that they had long ago lost faith in Horne. “Lewis could sell you a pencil for a million dollars,” a former head of PR, told the magazine.

Another former manager went further: “He thinks he is Elon Musk, but he is just a fraudster. He doesn’t have a clue about cars.”

The board of Swedish Match recommended that its shareholders accept the bid of 106 Swedish kronor per share, nearly 40 percent above its closing share price on Monday, the companies said in separate statements.

Stockholm-based Swedish Match derives more than 65 percent of its revenue from smoke-free products, including chewing tobacco and the Zyn brand of nicotine pouches.

Philip Morris announced in 2016 a long-term goal to stop selling cigarettes and replace them with alternatives that it says are less harmful.

The US company sells cigarette brands such as Marlboro and Chesterfield in 180 markets outside the United States and has invested billions of dollars since 2008 in vapor products, oral nicotine and other “reduced-risk” products.

The group plans to generate at least $1 billion in annual net revenues from nicotine-free products by 2025.

“We are pleased to announce this exciting next step in Philip Morris International’s and Swedish Match’s trajectory toward a smoke-free future,” the US company’s chief executive, Jacek Olczak, said in a statement.

“Underpinned by compelling strategic and financial rationale, this combination would create a global smoke-free champion — strengthened by complementary geographic footprints, commercial capabilities and product portfolios — and open up significant platforms for growth in the US and internationally,” he said.

Swedish Match chairman Conny Karlsson told AFP that the deal was a “good offer” for shareholders.

“It’s great to have the chance to broaden the distribution of our products, which can compete with cigarettes,” Karlsson said.

Swedish Match is also known for making cigars and “snus”, a form of snuff particular to Nordic countries.

The sale of snus, a moist powder tobacco originating from dry snuff, is illegal across the European Union, but Sweden has an exemption. It contains nicotine and comes in teabag-like pouches that are placed under the lip.

In 2012, Swedish Match said an associate to the EU’s then health commissioner had sought a 60-million-euro payment from the company to push for a proposed tobacco law that would lift the snus ban.

The firm filed a complaint with the European Anti-Fraud Office and the health commissioner, John Dalli, resigned from his post.

Dalli appeared in a Maltese court this year on charges of bribery and trading in influence over the lobbying scandal.

Philip Morris, listed on the New York Stock Exchange, was up 0.6 percent to $99.47 in electronic trading before the stock market opened.