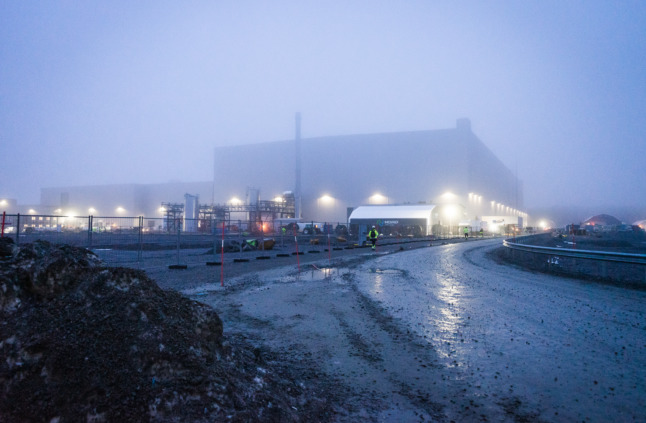 Northvolt's battery factory in Skellefteå, northern Sweden. One of many large infrastructural projects built with the help of posted workers. Photo: Axel Hilleskog/SvD/TT

The building industry is in dire need of labour, and foreigners are the ones filling positions on building sites, newswire TT reports.

Last year, over 55,000 people arrived in Sweden to work as posted workers – workers sent over to work in Sweden temporarily by their employer in another country.

According to the Swedish Work Environment Authority (Arbetsmiljöverket), who keep a record of all posted workers in Sweden, this is a sizeable increase on 2020, where 39,700 posted workers were reported in the country – a number which is most likely lower due to pandemic restrictions which made border travel more difficult.

However, this year’s figures also show a noticeable increase since 2019, where 41,500 posted workers were reported.

“We’re seeing an upwards trend. And it’s not so surprising, considering the large infrastructure projects we have around the country, especially in the north,” Arne Alfredson, head of department at Arbetsmiljöverket told TT.

This is also clearly visible in statistics. Posted workers dominate in the building industry, where the number of posted workers also saw the largest increase between 2020 and 2021 – from almost 20,000 to 34,000 workers.

An analyst report predicting that SAS is on the brink of bankruptcy sent the Scandinavian airline’s share plunging more than 25 percent, AFP reports.

The dramatic fall came after analysts at Norwegian bank DNB updated their sell recommendation, noting that the company’s debts of 40 billion kronor ($4.35 billion) are “unsustainable” and that “restructuring” is “needed to avoid bankruptcy”.

Since the start of the pandemic the airline has lost around 80 percent of its market value.

While many of the Covid-19 restrictions that have plagued the airline industry have now been lifted, SAS ran into new troubles in recent days when a baggage handler strike in Copenhagen caused delays and cancelled flights.

In 2020, the ailing airline cut 5,000 jobs – representing 40 percent of its workforce – and in May 2021 announced a credit line of three billion kronor ($350 million) from the Danish and Swedish governments, its main shareholders, to get through the crisis.

The company has received billions in financial support from the Swedish and Danish state, the two main owners.

AFP reports that Ericsson employees may have bribed Islamic State group members to get road transports through Iraq, the Swedish telecoms giant said.

“What we see is that people have paid for road transport through areas controlled by terrorist organisations, including Isis,” Ericsson’s CEO Börje Ekholm told Swedish financial daily Dagens Industri, about the extremist group that’s also often referred to as the Islamic State or IS.

“With the means we have, we haven’t been able to determine the final recipients of these payments,” he added.

Ericsson’s share price tumbled by seven percent in opening trading on the Stockholm stock exchange after the news.

Ekholm’s comments came hours after the company released a statement late on Tuesday admitting “serious breaches of compliance rules and the company’s code of business ethics” regarding Ericsson employees, vendors and suppliers in Iraq between 2011 and 2019.

It said an internal investigation conducted in 2019 had revealed “evidence of corruption-related misconduct”.

The company said it had chosen to disclose details of the now two-year-old investigation due to “detailed media inquiries from Swedish and international news outlets”.

Bitte Hammargren, Middle East analyst at the Swedish Institute of International Affairs described the news as “scandalous” to newswire TT. “It’s demoralising for Iraqis who have fought so hard against both corruption and Isis, often with their lives at stake,” she said.