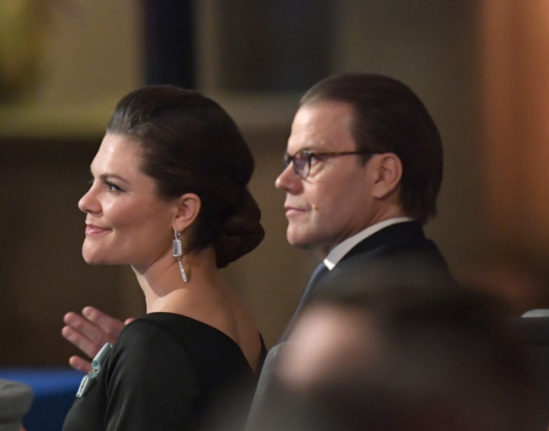 Crown Princess Victoria, who is next in line to the throne, denied rumours that the couple were planning to divorce alongside her husband in a post released on the Swedish royal family’s Instagram and Facebook accounts on Saturday.

“It has come to our attention that an extensive negative rumour campaign is ongoing regarding our private relationship. Statements are being spread regarding betrayal in the relationship and an imminent divorce,” the couple said.

“In normal circumstances we do not comment on rumour and speculation, but in order to protect our family we wish to clarify, once and for all, that the rumours currently being spread are completely unfounded,” they continued.

The denial follows articles by Swedish celebrity news site Stoppa Pressarna, reporting that the couple were in crisis and on the brink of divorce.

The couple have been married since 2010 and have two children, Princess Estelle and Prince Oscar.
Swedish vocabulary: skilsmässa – divorce
Risk for snow chaos in central Sweden
More than 30 centimetres of snow could fall in central Sweden today, newswire TT reports. The Swedish Meteorological and Hydrological Institute (SMHI) warn of slippery roads due to snow, as well as low visibility which may affect morning traffic.
SMHI have issued an orange warning over Örebro, Västerås, Uppsala and Stockholm due to heavy snowfall and strong winds, and commuters are encouraged to be careful on the roads this morning.
“The temperature is around zero, so there will be a lot of slushy snow and ice. At times, there will be heavy snowfall, so there will be low visibility as well, so you should make sure to be out in good time if you need to travel this morning,” Emma Härenstam at SMHI told TT newswire.
“In Svealand (central Sweden) and Gävleborg county, there will be slippery roads due to snow,” Härenstam told TT.
“Conditions may be especially difficult in the southern parts of Stockholm county and coastal areas of Södermanland due to icy roads, so it’s a good idea to be careful,” she told the newswire.
An orange warning is the second-most serious on a three step scale, and means that there is a large risk that roads will be affected, as well as delays to bus, train and air transport.
Swedish vocabulary: halka – weather conditions when ice or snow means there is a risk of skidding
Swedish Trade Union Confederation membership increasing among immigrants
The Swedish Trade Union Confederation (LO), an umbrella organisation for 14 trade unions within the private and public sectors, is reporting an increase in new members after over a decade of declining membership. They have approximately 1.4 million members across Sweden.
“(Membership) increased in 2020, that was the first time for many years. And in 2021, the proportion of workers who are members of a trade union increased further,” Anders Kjellberg, sociology professor at Lund University told newswire TT.
Although the number of members decreased in 2021, the proportion of workers who are members of a trade union increased, according to a report released by Arena Idé. This, Kjellberg told TT, may be explained by the fact that many temporary jobs disappeared – temporary employees are rarely members of a trade union.
The most important explanation behind the increase is that more immigrants are applying for membership, although rates are still lower than for those born in Sweden. Kjellberg explained to TT that this can be due to the fact that immigrants have different experiences – some have come from countries outside of Europe where trade unions are rare and may be sceptical to joining.
Another aspect, Kjellberg told TT, is that immigrants are less connected to the labour market, meaning that they – like Swedes in the same situation – are less likely to join a trade union.
“They are also overrepresented in branches where there is already a low rate of trade union membership,” Kjellberg told TT, using the restaurant industry as an example.
Swedish vocabulary: fack – trade union