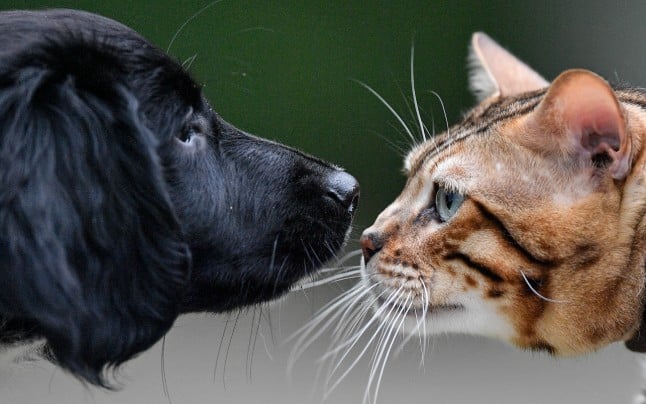 Cats will have to be ID-marked and registered in Sweden just like dogs, after a new law was passed in Sweden on Wednesday. Photo: Martin Meissner/AP/TT

Four Russian fighter jets entered Sweden’s air space to the east of the island of Gotland on Wednesday evening, the Swedish Armed Forces said in a statement.

“Against the background of the current situation we are taking the incident very seriously,” Carl-Johan Edström, Chief of Sweden’s Air Force, told AFP.

According to the Swedish Armed Forces, the violation was brief, but Swedish Jas 39 Gripen jets were scrambled to document and photograph the two Su-24 and two Su-27 fighter jets.

The violation occurred during the day, at about the same time as a joint Swedish-Finnish military exercise in the Baltic Sea.

Swedish clothing giant H&M said on Wednesday that it would halt all sales in its Russian stores over the war in Ukraine.

The company said it was “deeply concerned about the tragic developments in Ukraine” and that it stood “with all the people who are suffering.”

“H&M Group has decided to temporarily pause all sales in Russia”, the clothing retailer said, adding that stores in Ukraine had already been closed “due to the safety of customers and colleagues.”

H&M said it was continuously monitoring and evaluating the situation.

Sweden has agreed to guarantee a $50m (€45m) World Bank loan to Ukraine, the government announced in a press release on Thursday.

“By giving a guarantee to the World Bank, Sweden is helping to support Ukraine financially in this economically very difficult situation,” Sweden’s aid minister, Matilda Ernkrans, said in a press statement.

A new poll from Novus for Sweden’s state broadcaster SVT has found that a full 32 percent of those surveyed would vote for the Social Democrats in a general election, a 2.7 percentage point rise on their previous poll, and the highest support the party has seen since January 2015.

The poll of 3,825 people was carried out between January 31st and February 27th.

Cats in Sweden to gain same status as dogs

Cats in Sweden will now need to be given ID markings and registered with the Swedish Board of Agriculture in the same way as dogs, after the parliament on Wednesday voted for the creation of a new cat registry.

The decision was welcomed by Animal Welfare Sweden, which had been campaigning for a change in the law, under the slogan, “Stop the CATastrophe”.

Sweden and Finland do joint exercises in Baltic Sea

Sweden and Finland carried out joint exercises in the Baltic Sea on Wednesday, practicing coordination of air and marine defences.

According to the Swedish Armed Forces, the purpose of the exercise was to improve the countries’ ability to work together at short notice.

Fighter jets and battleships from Sweden were involved together with the so-called Telekrigsbataljonen, which specialises in electronic warfare.